Feasting and nesting over Thanksgiving weekend

I may be slacking with blogging, but I've been pretty productive on the home front. Eric says I'm nesting. My mom asked if I was doing the the opposite. I say I'm purging. I think purging is nesting. I mean, nesting means making room, right? Not just accumulating crap. The crap is already accumulated. What I'm doing is purging this house of as much of it as humanly possible. It's driving me nuts, and there's no room for an extra body at the moment. Well, we could fit the extra body, just not all the necessary crap that comes along with an extra body, especially when that extra body is a baby that comes with it's own set of miniature furniture and play things.

Anyway, I've been annoyed with the house for eons and feeling like we've just been leaving it as is because we're in limbo and keep thinking we'll move, and THEN we'll settle in and have the house set up the way we want it. Living like that stinks. And it's stupid. So I've decided to make the house work for us right now. So far I'm mostly revamping the basement, but I have plans for every room in this house.Most of the plans just require extreme purging.

So that's what we did over the Thanksgiving weekend, after the big feast, of course.....

My mom and brother and his two munchkins arrived late on Wednesday afternoon. Clay and Hannah spent an hour or two adjusting to each other which basically means that they alternated between running around excitedly together and arguing over something. Hannah took a couple of self-imposed alone times in her room to help her adjust to the chaos of a full house, and eventually, we tossed them both in the tub to wind down. 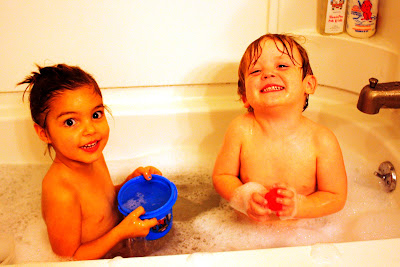 Clay was going to sleep on a mattress on the floor in Hannah's room but since he napped in the car on the way here, that was a no go. I read them both bedtime stories and then Clay went down to the basement and fell asleep watching Shrek on the air mattress we had set up for Chip.

The next morning I got busy in the kitchen and Eric camped out on the floor with the kiddos, helping them glue images clipped from magazines to a shoe box. That along with a few other crafts kept them engaged and in one place for a surprisingly long period of time. 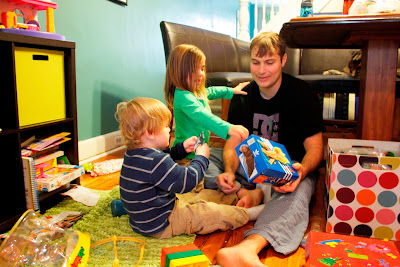 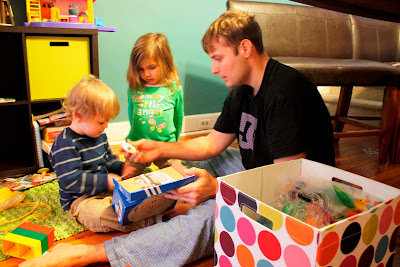 When their energy threatened to burst the seams of the house we bundled them up and walked to the playground. Hannah showed Clay her favorite climbing tree, and he scurried up with his dad's help. 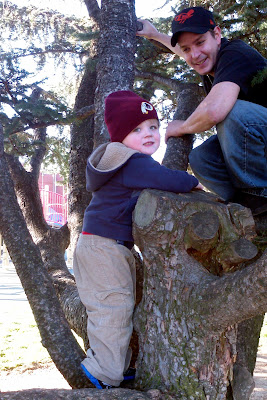 As expected, everybody was a little calmer after some sunshine and fresh air. I finished up the feast, and we chowed down. I'm not really into pictures of food so there are none...but I suppose a family shot would have been nice. Oh well, there's always next year.

After lunch Clay and Hannah helped me whip the cream. I let them play with the mixer a little too long though and we ended up with a hybrid between whipped cream and butter...Not ideal for a pumpkin pie topping, but not totally terrible either. 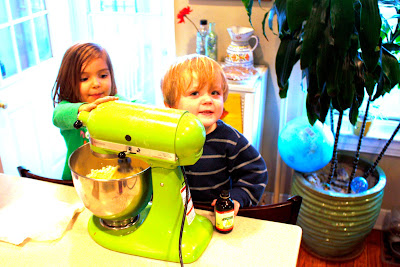 They both seemed to enjoy the fruits of their labor! Honestly, Hannah probably would have liked it more if I had let it turn the whole way into butter. I swear that kid would eat butter by the stick if I let her. 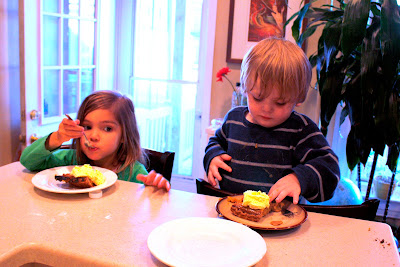 And that's it. That's all the pics I took. Not very exciting, I know. The older Hannah gets, the less of a mamarazzi I become. I suppose that's normal. There are far fewer first times these days, and how many pictures do you need of the same ol' activity?

I wonder if I'll resume mamarazzi habits after the new baby comes. There's all kinds of stuff instructing you to do the same with the second as you did with the first, which makes sense--obviously the second kid should be ogled equally--but life isn't fair and people don't do things just because they should (although I often do--this compulsion is a recurring topic with me and my therapist). If I had to wager on it, I'd guess that the mamarazzi pension will return with a vengeance when the baby shows up and that this blog will be plastered with pics of him and his big sister.