In case you haven't heard yet, this one is a boy. We had the sonogram last Tuesday. Eric has been grinning ear-to-ear since the sonogram tech pointed to the space between the baby's legs and asked what we thought that was. Prior to pointing out his little penis, the tech asked Hannah if she wanted a brother or a sister. Hannah had the same answer as usual: sister. In spite of that, she wasn't upset by the news that she'd be having a brother. She is still very excited for us to have a baby.

I am also excited in many ways and incredibly intimidated in others. It'll be nice to have the opportunity to have a hand in raising someone who I hope will turn out to be a totally awesome, well-adjusted, emotionally stable, compassionate, and intelligent man. At the same time, I have a brother, and being his sister from the time he was about 13 until he was mid twenties while he battled severe drug and alcohol addiction was brutal; I can't even imagine how much harder it must have been to be his mother. Really, I don't know a lot of men who don't have addictions or haven't had an addiction at some point in their lives (though none as drastic as my brother). Even a lot of the guys I know who are totally put together, fully functioning members of society drink waaaaaaay too much a little too often. And yeah, I realize that addiction has nothing to do with gender (and yes, I remember my own own days of over-partying and drinking way too much way too many nights out of the week) and that Hannah has every bit as much chance of ending up with a problem as the little boy in the belly, especially given all the genes for alcoholism that are coming at these kids from both my side and Eric's side; I know that logically, but emotionally, I'm carrying a bit of childhood baggage. Don't worry, I'm working it out with my therapist, and in spite of that un-realistic and unfound paranoia, I am looking forward to a new challenge and to learning as much as I can about raising a boy.

Mmmmkay, enough of my ranting and public worrying. Without further adieu, here are the first pics of the little guy. 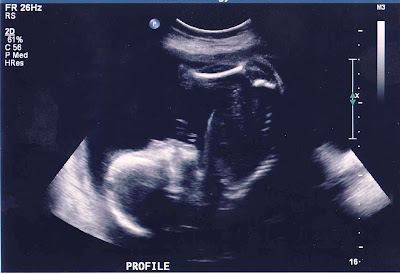 He's yawning in this next one. Cute, huh? 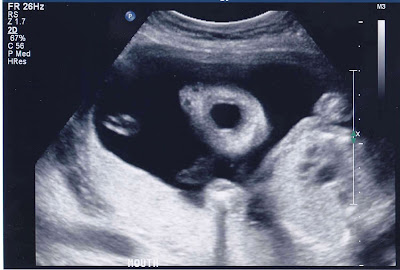 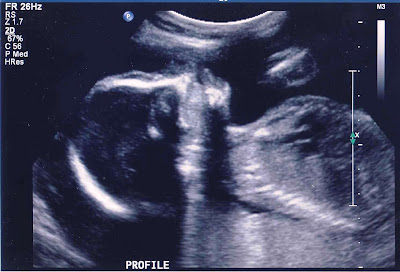 These next pics are a little weird, and really, I don't understand how they did it and wish they would have asked prior to doing it because it seems to me that it can't be healthy for the baby, but I don't really know, maybe it's no different than the other kind of sonogram. Anyone know? 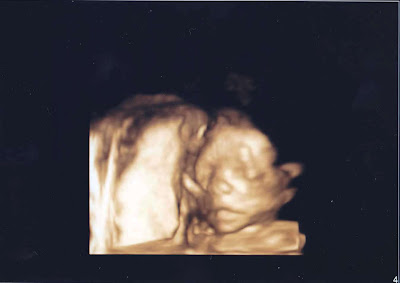 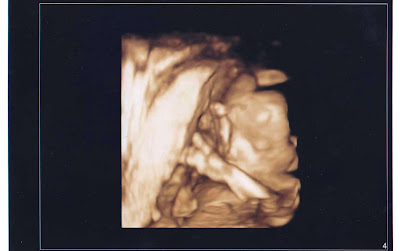 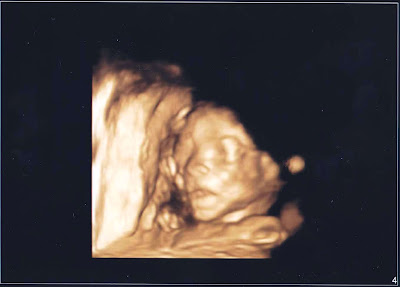 I wasn't surprised when she said it was a boy though. This pregnancy has seemed a lot harder than the first. I'm not sure if it's just because I also have a 3-year-old and take no naps (I napped daily when pregnant with Hannah), or if it really is worse, but it definitely feels a lot more brutal. Even now, when the food aversions and the first trimester sicky-sick feelings are long gone, I still have no energy. I get winded going up the stairs and my quads burn when I get to the top. Pathetic. Yesterday I went on a measly 4-mile hike, and today I have sore legs and shin splints. Who am I??  Being pregnant with Hannah didn't slow me down at all--I was still making it to a couple of spin classes a week and a couple of Body Pump classes too. These days, I'm lucky if I make it to the gym twice a week, and I'm barely making it through my usual Pilates/barre workout.  I hate feeling so weak. I'm trying to be kind to myself and patient and compassionate, I really am, but it's hard. It's hard to be incapable of things I've always been more than capable of.

On that note, it's off to bed with me. That hike yesterday seriously took it out of me, and my eyes are beyond heavy. 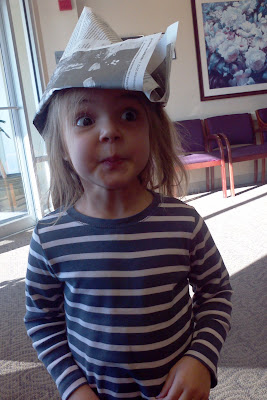