The egg hunt we were supposed to go to on Saturday morning was canceled ahead of time due to the fore casted torrential downpours.  Eric and I have been wanting to check out this Sun Nurseries place that one of his coworkers told him about, but it's a 35 minute drive west and trying to find a time to go there has been impossible, sooooo, on a whim, I got in touch with Kathryn and lo and behold! She happened to be in town from college and willing to come spend the morning with Hannah so Eric and I could have date morning at the nursery.  Romantic, right??? Screw dinner and movie--this was way cooler.  Kathryn took Hannah to Port Discovery and Eric and I went and picked out a bunch of plants in the pouring rain.

That place was AWESOME.  We took measurements of all our window boxes, both our plot and MC's plot out front, the planter Eric built out back (pics below), the flower boxes hanging off the back deck, and our assortment of hanging baskets and pots.  One of the workers there helped us combine food with flowers to create what I think is going to bloom and blossom into a pretty rad urban garden.

Most exciting thing purchased: blueberry bushes! One of them is even called Hannah's Choice--how cool is that!  Both are out front so we'll see how they do with birds, squirrels, and random pedestrians...

Eric was so psyched when we got home that he put on his rain suit, gathered his tools, and got to work in spite of on again off again downpours. 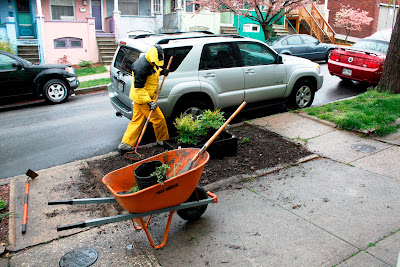 He finished up with the front plots right about the time Hannah was waking up from her nap and moved on to the window box. 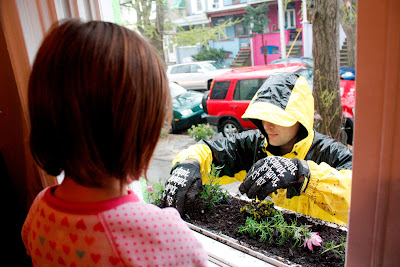 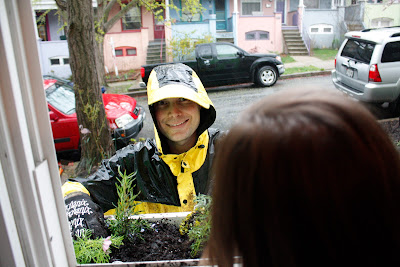 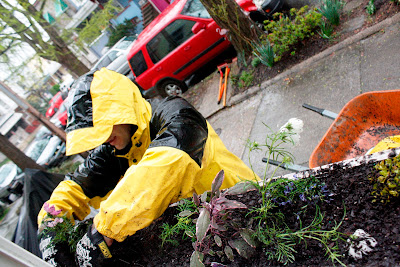 The sun reappeared the next day, and Hannah and Eric tackled the second story window boxes. 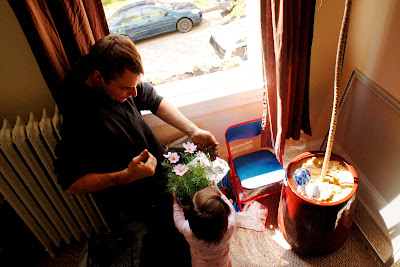 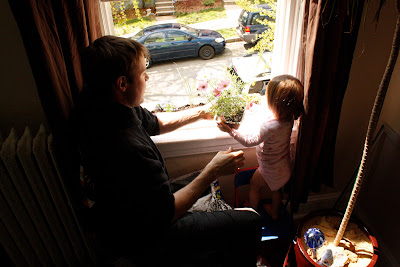 I curled up under the covers in bed to watch, and after a while, Hannah joined me.  She had pulled out a flower from a bunch and was inspecting it closely. 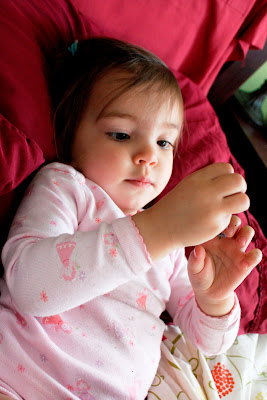 Since it was sunny I took a bunch of pics of the finished work done the day before, but...I probably should retake them on a cloudy day because sunny pics aren't great...See? 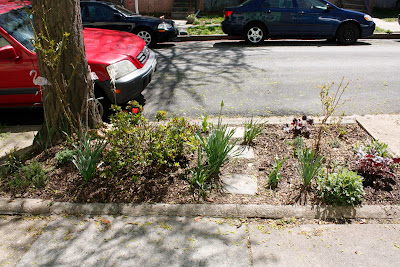 Here's a close up of our first floor window box.  It has rosemary, sage, creeping jenny, cosmos (the tall flowers), and some little blue flowers that will fluff up between the creeping jenny and the cosmos. (The second story boxes have the same except instead of the herbs they have some tall grass.) 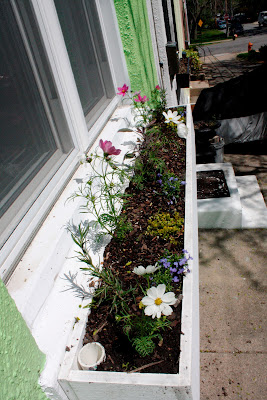 After nap, Hannah grabbed her sunglasses and headed out back to help dad finish up the planter. 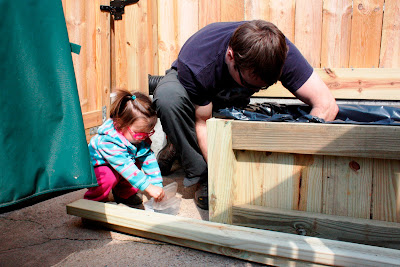 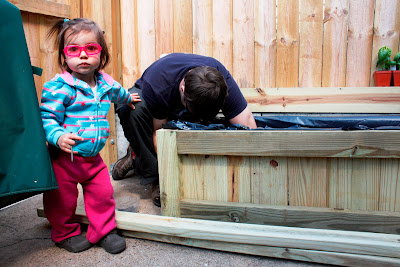 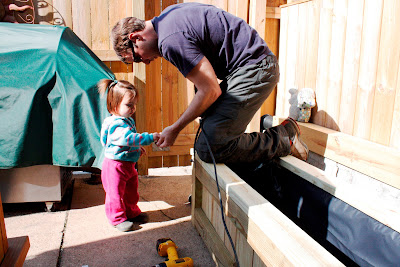 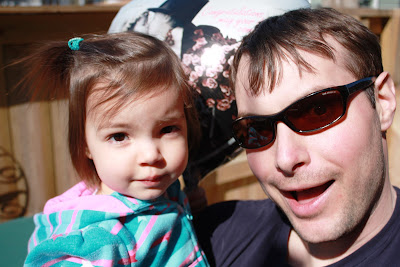 How cool is this planter!!! It's exactly what I wanted but was super expensive online. We happened to have most of the wood laying around so all Eric had to buy was the liner and a couple 2x4s and then, voila! My magical husband waved his wand around and made this awesome planter appear for me!  He's so nice. 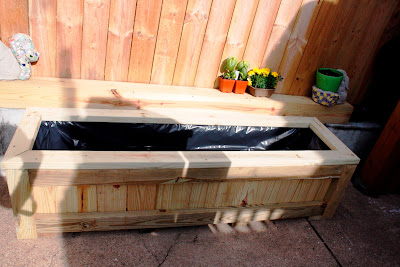 We didn't get all the stuff for this box because it wasn't in yet, but it'll have tomatoes, sugar snap peas, basil, mint, cilantro, a sugar baby, and some marigolds to keep the bugs away.  We're putting strawberries in the hanging baskets, nasturium and an assortment of herbs in the flower boxes on the deck, and carrots and mixed greens in separate 5-gallon pots.  We've got more pots so we'll probably end up with more stuff, but that's the plan so far.

I can't wait for everything to fluff up and get going! It's going to look (and hopefully taste) awesome!
Posted by terri at 9:11 PM

Email ThisBlogThis!Share to TwitterShare to FacebookShare to Pinterest
Labels: daddy/daughter