Hannah has been consistently sleeping until 7:00-7:30 lately which is great except that now we tend to run late to all our morning activities (even though I wake up at 6:00 with Eric--6:20 on days when his alarm is off).  On Fridays we try--usually unsuccessfully--to get out of the house by about 8:45 so we can get to the gym right at 9:00 when the kids club opens.  This way I can swim for an hour or so, then still have plenty of time left to go get her and take her swimming for another hour or so.  The later we get to the gym, the less time Hannah has to swim....OR, the later Hannah goes down for a nap.  In an effort to speed up our process tomorrow morning, I laid out our swim stuff while she was napping and left it in a pile on our bed.  It was still there when she went chasing off after the cat during dinner.  I guess the cat sought sanctuary in our room which was a smart move since the goggles proved to be more distracting than the furry feline.  When Hannah came back downstairs (sans cat), she had my goggles around her chest...I'm not sure it's a look that will ever catch on, but I admire her creativity and forward fashion sense. 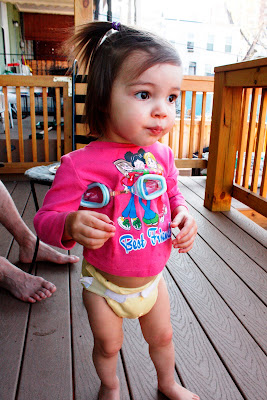 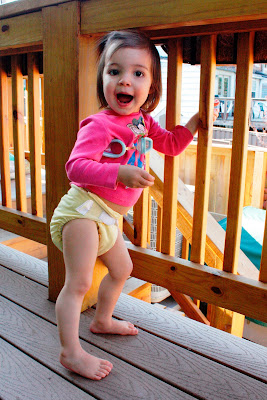 By the way, this shirt is one of those random hand-me-downs that I talked about trying to avoid in the last post because of vanity issues.  Why would they make a toddler shirt with three teenage-looking girls on it and the saying "best friends"? Toddlers don't have best friends. It's just weird. But Hannah likes it and is always trying to get out of the house with it on.  Lucky for me it is now in the dirty laundry so, at least for the next few days or so, I don't have to worry about her pulling it out of the drawer and the subsequent inner turmoil I have between wanting her to express her individuality (valid) and wanting to meet my incredibly low standard of cool (not valid).
Posted by terri at 8:33 PM