Hannah's first ride in the Jeep

One of our big priorities this spring has been to get the bikes Hannah-ready.  This involved buying a bike seat and helmet for her and fixing my bike so that it doesn't throw my feet off the pedals every time I switch gears.  We were thinking about getting me a new bike--a sweet cruiser with high handlebars and a comfy seat--so we moved the car seat to the Jeep and headed to REI last weekend.  (The bike rack is on the Jeep so we had to take that in case we bought a bike.)  This was Hannah's first ride in the Jeep, and in spite of it forcing her to be really laid back, she seemed pretty happy. 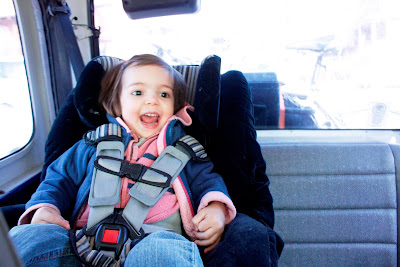 It had been a while since we'd been to REI and since it's one of our favorite stores, we ended up putzing around for a few happy hours. I rode a couple bikes around the parking lot and loved one, but was worried that it might be too cruiser-ish...See, I still want to be able to ride on trails, over tree roots and stuff, just nothing crazy and technical.  So we didn't buy a bike, but we bought a ton of other stuff.  Eric used his member discount (20% off one item until April 10!!) to buy the kid seat.  We got the iBert, the one that sits up front just below/behind the handlebars.  We saw somebody with one at the beach last year and were immediately intrigued by how cool it looked.  Shortly after that, Hannah's friend Kylie ended up with the same seat so we got to get a better look at it and were sold.

I used my member discount to buy a much-needed new backpack that I LOVE. It fits on my back like a turtle shell and feels amazing. It was pricey, but I don't carry a purse (and haven't bought one in years...), and my old backpack was from 1998 which is fine except that all the zippers were broken, most recently the one in front (where I keep my wallet) broke.  So I splurged and got something I love because I carry it every day.

We looked at helmets for Hannah, but they didn't have anything gender neutral so we passed, which is good because then we found a super cute duck one sold at Baltimore Bicycle Works where Eric took my bike on a whim just to see if we could fix it up and make it awesome and save on buying a new bike.  That place is amazing.  They fixed my bike easy peasy and charged next to nothing to do it. Then they put on some new high-riding handlebars so I can sit up all dorky rather than be hunched over--it's awesome! It's like a whole new bike, and I love it, and the whole thing, including the helmet, only cost us $80!!!!  I love them and will definitely be using them for all future bike needs.

Temps are supposed to be in the 70's on Monday, and Eric is off so we're planning our first family bike ride!  (Well, first except for when we rented the bikes last year at Chincoteague.) Fingers crossed that the rain stops pouring over Baltimore so we can go!!
Posted by terri at 10:03 PM