We took Hannah to her very first circus on Thursday morning, and it was awesome!! We've decided to make it a yearly tradition and are already looking forward to next year and hoping Hannah will be able to make it through the whole show.  This year we left at intermission because shortly before intermission (which happened around 11:45 a.m.--lunch time), Hannah started getting fussy.  For the first hour she sat really still on Eric's lap and just stared wide-eyed, taking in who knows how much of the crazy lights, loud noises, animals, and acrobats, and then she must have reached stimulation overload.  Intermission might have been enough of a break for her, but she woke up early that day (of all days!) and was rubbing her eyes and doing the sleepy whine, so we decided to stick to her schedule and take her home for lunch and a nap.

Eric and I were bummed to have to miss the second half of the show so we bought a DVD. We also bought Hannah a coloring book and have spent the days since then coloring in elephants and clowns.

In spite of pretty decent seats in the lower concourse (last row) and the fact that Eric and I took turns fiddling with the camera settings, we never did figure out the ideal circus setting and therefore didn't manage to get any  good pics. Fortunately, I assume that most of my followers just like following along with Hannah and don't care about photo quality (namely, grandparents), so this should suffice!

That was the last show before intermission.  I had Eric try one more time to get a pic of Hannah with the Ringling Bros. sign in the background...It's a little out of focus and Hannah looks exhausted, but I guess it's better than nothing. 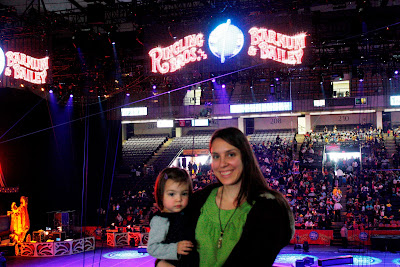