Hannah's birthday hit in the midst of the first trimester ickfest so we kept the celebration small and laid back. I figure it's easier to have multiple small get togethers than one big one, and anyway, grandparents like their QT since none of them live close so it's easier to just separate out the visits.

On Hannah's birthday weekend, my mom came with my brother and his family and my cousin Kim. I warned everyone that I was not cooking since that is not within my first trimester capabilities. Eric threw together some burgers and I bought some pre-made stuff from the grocery store. This is totally unheard of for me so that should indicate to you just how ick I was feeling. Frankly, I'm still pretty ick, but not as ick and not for as much of the time.

As usual, Hannah tore open her presents immediately upon arrival. The first one, from Grammy, completes her Ladybug Girl costume.  She was thrilled and wears these ladybug rain boots pretty frequently, even when it's not raining and is terribly hot outside. 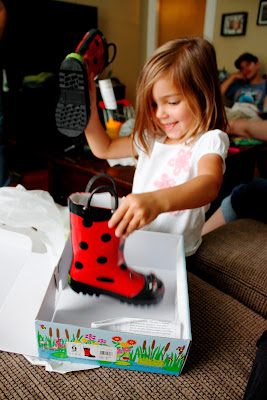 Uncle Chip and Aunt Erica picked out a whole bunch of fun, random presents for Hannah including this dress-up set from the movie Brave that includes a crown, clip-on earrings, and a necklace. I am still trying to figure out how this super girly, princess-loving child sprung from my womb....She is definitely her own person! 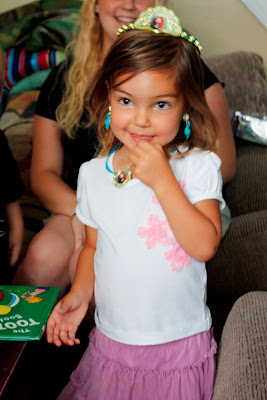 Grammy also got Hannah some great wooden puzzles, and Chip and Erica got her a princess Play-Doh set. 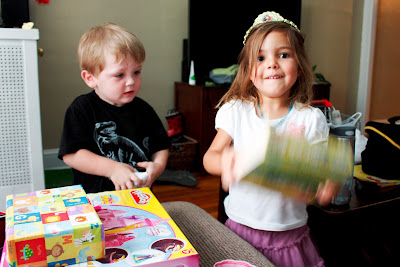 She loves the princess stuff and spent quite a bit of time making dresses for the princesses, but holy cow do I miss the days of them bringing over cars and trucks for her! I suppose since they have two boys they enjoy an opportunity to buy girly stuff. 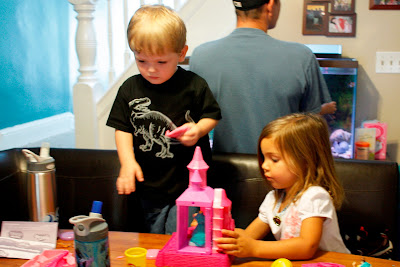 Chip and Grammy were both craving ice cream cake, and I had never gotten around to baking anything so Chip ran to the store to pick one up. I had no intention of letting Hannah have any, but it gave us someplace to put the candle. 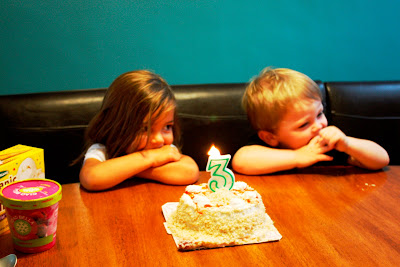 After singing and blowing out the candle, I slid the cake out of sight and scooped some raspberry sorbet into organic sugar cones for Hannah and Clay. Hannah loves raspberry sorbet, especially in an ice cream cone, so she didn't give the cake a second look. 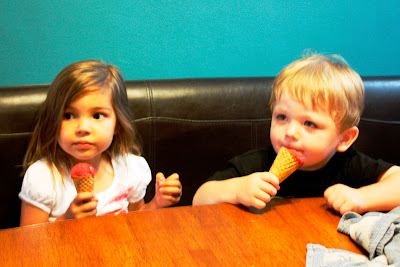 Kiddos were wiped out that afternoon so we all snuggled up on the couch together. (Hannah is in a bath towel because the munchkins were skinny-dipping in the little wading pool out back for a while.) 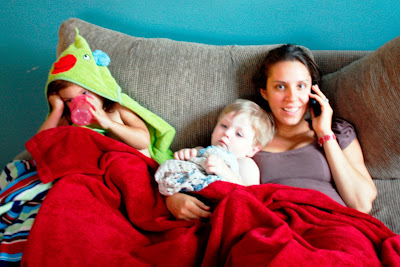 Eric and I bought Hannah the Ladybug Land habitat.  It arrived earlier in the week, and since it came with live ladybugs, we had to open it immediately. I had never seen ladybug larvae before and don't think Hannah had either, so it was a learning experience for us all. They were so tiny, and I was so tired all the time that I didn't get any during pics the way I did when we had the butterfly habitat. I didn't pull out my camera until the end. After they had all turned into regular ladybugs and we had watched them for a few days, then Eric pried off the top and we took them out back and let them fly away. 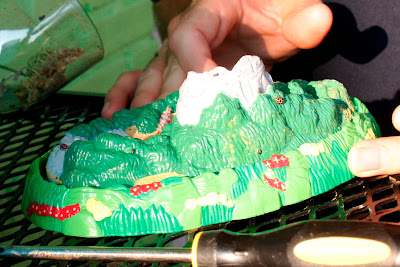 And now we have a 3-year-old who is totally ready for a sibling and is looking forward to sharing her room and having someone to play with. Happy belated birthday to Hannah!
Posted by terri at 12:51 PM