Unplanned weekends have been rare for us this summer, so rare that when one presented itself, we often spent it supine on the couch rotting our brains in front of the boob tube and attempting to recover from all the fun-related exhaustion. Miraculously, we had two unplanned weekends in a row in August and since we rested on the first one, we woke up on the second one ready for adventure. It was by far the most beautiful day of the year with perfect temperatures in the high 70s/low 80s and a bright, sunny sky, so we decided to take Hannah her first trip to our state's capital.

We went to the visitor center first to grab a map and a brochure for the pirate adventure we'd heard of, then, since we were starving, we crossed the street to Ramshead and had lunch out back on their secret garden-esque patio. We'd normally have eaten somewhere more original, but when you're pregnant and hungry, you don't mess around--you just eat.  Although an un-original choice, it was a good one. We were the only people on the patio for a while which meant Hannah could run a ruckus, and like I said, the weather was beautiful so it was a great day for lunch in the secret garden.

During lunch I called the pirate adventures place and attempted to score us a reservation but as it turns out, that's the kind of thing you need to plan far in advance because they were booked up all day and had a waiting list. Eric insisted we go there anyway and check it out. Hannah picked out a pirate hat and flag and we bought it figuring if we couldn't follow up on our promise to get on the pirate boat, we could at least let her pirate around town. 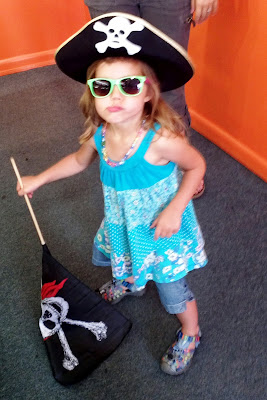 Baltimore has a similar pirate adventure so maybe we'll check that out next time we find ourselves with an unplanned weekend where all parties have energy.

We left the car by the pirate place in Eastport and walked across the bridge to Annapolis stopping briefly for a photo op.  Arggh!!! 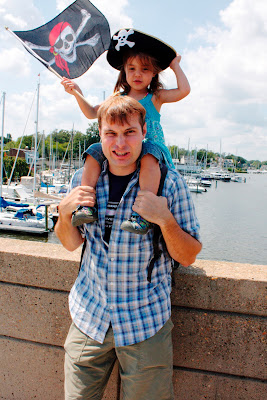 On the other side of the bridge, we stopped to play at a giant playground. It's nice to go someplace with no agenda other than to putz around and to be free to follow whatever whim strikes your fancy.

After tiring of the playground, we continued our trek to the main street and into a sunglass shop because Eric has been desperate for a pair of shades since losing his a few weeks prior. Hannah picked out the neon green and pink 80s shades that she's wearing in most of the pics. Eric picked out a fancy pants pair of expensive shades that he is completely smitten with. He's an avid loser of sunglasses, but so far he seems to be keeping pretty good track of these.

Ice cream was our next stop. Yum. I opted for sorbet since dairy has been particularly disruptive to my pregnant gut causing insane gas pains. Hannah got a blueberry ice cream with graham crackers that was delish. I totally coveted it. 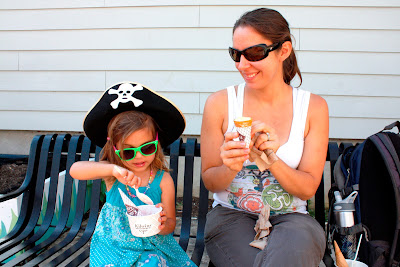 We cruised down to the boats after our snack (maybe this is Ego Alley?? I'm never sure of what they're referring to when they say that and it isn't on the maps) hoping to score a ride for Hannah who was insistent that we get on a boat. 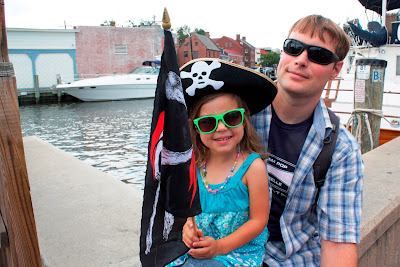 After a tourist shot of Eric, I posed for my very own tourist shot. I don't get many of those, and this one was not without its drama. As I knelt down, the wind swooped Hannah's hat off her head and into the water. I laid down on my stomach and stretched my arm as far as I could, but the water was too low for me to reach. Once Eric realized what had happened, he assumed that position and, with me and Hannah sitting on his legs to keep him on the deck, retrieved the hat. Go, go Gadget arms! 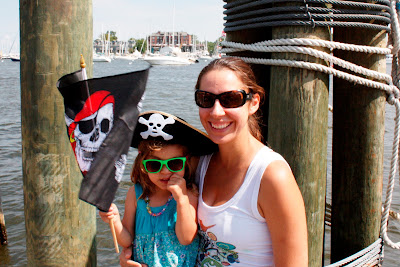 We considered shelling out the dough for a boat tour since Hannah wasn't giving up on the boat ride and was getting fussier and fussier at our inability to fulfill her wishes, but instead we settled for a $2 ride on a water taxi that schlepped us back to our car in Eastport. 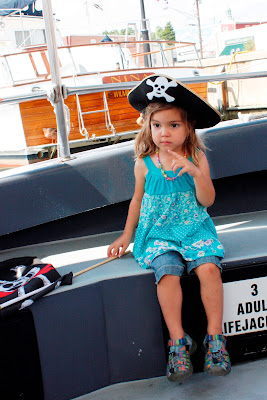 At first we were the only people on the boat so we were small talking with the captain and mentioned that Hannah was desperate to drive a boat. Once away from the dock, he let her be the water taxi captain. She's too short to sit on the seat, but she loved standing up to steer the vessel! She even got a "captain for the day" sticker. 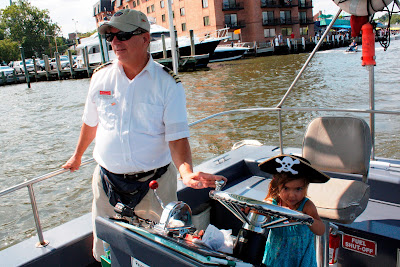 All dreams and expectations fulfilled, we shuffled slowly back to our car and drove home where we promptly crashed on the couch to rot our brains and rest our bodies in front of the evil boob tube.
Posted by terri at 8:39 PM