As promised, here are some shots of the flower girl all decked out in this super fancy gown that Brandy bought for her. We tried to get the neighbors to take a family shot before we hopped in the car, but no one was home, and we were already running late, as usual.

Let the record show that Hannah LOVED this dress, at least at first. After a few hours she was begging to take it off, but she loved it for the first couple hours, and when we went to Brandy's parent's house a month ago to try it out, she twirled around the living room and danced and then refused to take it off. When I told her that it was time to remove the dress, she ran and hid under a chair. I don't know what I was like as a kid, but I can assure you that if someone tried to stuff me into this much tulle at this age, I think I would die and beg to wear my yoga pants and sports bra underneath. 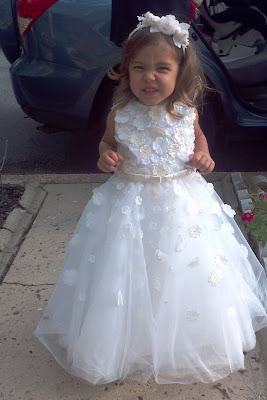 Once we got to Mount Vernon I insisted on snapping a pic of Eric and Hannah. I figure if we can't get the whole family in a shot, we might as well get two out of three! Could I have a more serious family? I mean really, would it kill these people to smile?? Handsome though, eh? 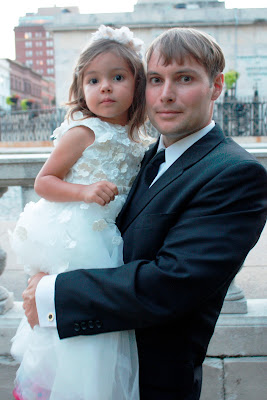 The photographer snapped shots as everyone got there so I'll see if I can buy a few of hers, after all, it's not everyday that the Kellogg's get all black-tie, fancy-pants!

Brandy and Tim were married at the Peabody Library which is an amazing location on its own, but once Brandy got her hand on it, holy cow. Triple the amazingness. It was beautiful, and the ceremony was amazing. They had a reading from The Velveteen Rabbit that made me want to go out and buy the book immediately. I know I read it as a kid, but I don't remember it and certainly don't remember it being that awesome. What a perfect reading for a wedding!!! And the vows---wow squared. Tim went first and he was downright tearjerkingly awesome. Brandy's were beautiful too. The whole thing--no words. Pure awesome sauce.

Anddddd, if you're wondering, Hannah did great walking down the aisle, or so I'm told; I really couldn't see since I wasn't on the end. Apparently she was very serious (shocker).

My camera didn't serve me terribly well. In general, I think that if you aren't the photographer at a wedding, it's impossible to get a good shot without being obnoxious. I tried to take a few but even though I was in the second row, every pic included the back of Ms. Meadowlark's lovely head, and really, all I could see was the backs of Brandy and Tim anyway.

Before the end of the night, I did manage to flag down the busy, beautiful bride and get her to pose with me and Hannah. 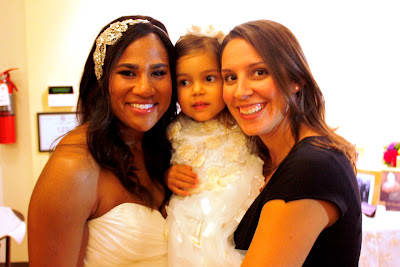 Eric tried to take some pics of Hannah during the short pre-dinner dance party that followed, but he was too far away and it was too dark and we were in the center of the crowd anyway so those are pretty useless.  Until we see what the photographer has, we've got these three pictures and some great memories. Many congratulations to two of our favorite people!
Posted by terri at 8:39 PM