On one of the mornings that Hannah didn't want to go to camp/school, I bribed her by telling her that if she went to school without crying and had as much fun as possible, then I would take her to the bookstore after picking her up and let her pick out any book she wanted. I had a hard time coming up with a bribe I could feel good about--typical suggestions/ideas have to do with TV time and sweets. I'm not into portraying either of those as rewards or special things to be coveted, but books, books we can covet. So after picking her up that day we went to the The Children's Bookstore and took our time exploring all options.

We looked at a lot of books, some of which I was not a fan of and managed to steer Hannah away from. Eventually she spied Ladybug Girl and loved the sparkly wings on the cover. I scanned the rave reviews on the back cover and, with the bookshop employees promising it to be a good one, headed for the register. Usually I read a book prior to buying it, but we'd been in there for a looooong time and read a lot of books by the time we found this one so I did something I don't normally do and put my trust in others. Lucky for us it worked out--Ladybug Girl is awesome. I love her, and I love this book!! I couldn't have picked a more perfect book for the occasion. I have plans to write a nice inscription about her growing up and being brave and going to school on the inside cover, but so far that hasn't happened. Oh, and she loves the book too; it's not just me.

Since Hannah loves dress up, wanting the costume was the next logical step. She's a little young for these delayed gratification bribes, but I tried another one anyway and told her that if she went to school every day and did her best to have fun then she could have the costume on the last day. We sat down together and ordered the wings and antenna and also a red tutu and since that brought my Amazon total to $18, I splurged on Ladybug Girl at the Beach to nudge my total up into the free shipping zone. (I wasn't about to drop $30 on a pair of boots.)

Hannah eagerly tore open the box when it arrived and then raced upstairs to put on the ladybug dress that Grammy bought her at the beginning of the summer, then back downstairs to slide the tutu beneath that. I helped her with the wings and antenna, and she posed proudly for pictures (wielding a bamboo stick that her and Eric pulled from a hiking adventure the previous day). 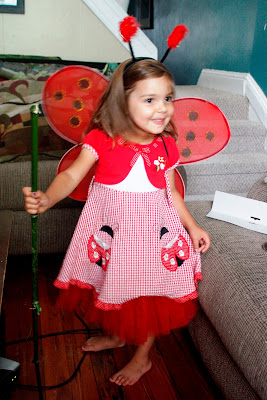 The next day she put on her costume immediately upon waking (this time with a random t-shirt instead of the dress), and we drove up to Loch Raven Reservoir for a hike. She walked around the reservoir collecting duck feathers and eating the tuna wrap I packed for her lunch. 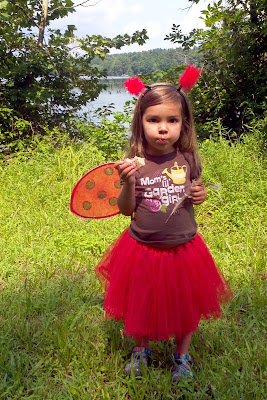 Then we headed for a trail. An inchworm was dangling in front of us from an invisible thread, and Hannah was mesmerized. She ended up carrying around that inchworm for the next 45 minutes. We didn't get very far on our hike since she just stared at her hand the whole time, and when she finally dropped it and we couldn't find it, holy crap, all hell broke loose. 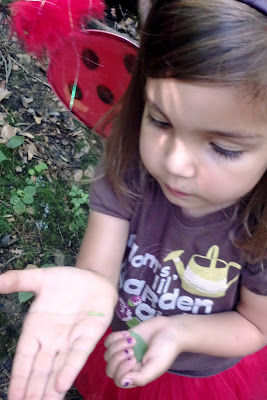 You can't see it very well in the above pic because my overall photography skills are slim to none in spite of that being one of my college majors, but it's there if you look really, really closely.

A couple of days later Hannah wrangled one of the antennae free from the headband, and that was pretty much the end of the costume. Eric doesn't have any black electrical tape in his arsenal of fix-it gear...We'll locate some eventually and be back in business.

Yay for grandparents who love to fully indulge their only granddaughter on her whims! Especially when those whims happen to actually be pretty cool. If you've got a little girl and haven't yet discovered the Ladybug Girl books, I highly recommend checking them out.
Posted by terri at 9:08 PM