Hannah's off to Montessori in the fall!

The exhaustion has quadrupled since Thursday and is making it so that functioning function on any kind of a normal level is downright unbearable. I've also started in with that annoying eating thing that happened the first time around where I get dizzy if I don't keep eat constantly, but most foods are super unappealing to me, thus making it impossible to ingest enough calories to keep from getting dizzy. Fun!

I'm pushing through it tonight anyway and will attempt to finally cross "blog about Montessori" off my to do list. It's the one blog post I keep procrastinating on, probably because I know it's going to be a big one. Maybe it wouldn't be so unwieldy if I'd broken it into little pieces like I meant to, starting back in the spring when Eric and I went to the open house and fell in love and applied on the spot, or maybe starting when I got Hannah's acceptance letter in the mail and sent back the signed contract, or maybe even starting when when I found out that we'd gotten financial aid (yay!!), but all those moments when un-blogged. Then we signed up Hannah for one of the 2-week summer camp sessions with the goal of making her adjustment easier in the fall. The camp meet-and-greet was back in the beginning of June, and since there weren't a ton of parents there, I whippped out my cell phone and went a little mamarazzi in anticipation of this very belated post.


On the day of the meet-and-greet, Hannah walked right into the classroom, headed straight for the shelves, and immediately engaged herself in an activity. For those of you who aren't familiar with Montessori, one of their philosophies is that all activities/toys should be placed on height-appropriate open shelves and in a progressive order so that the child can see the activities (since seeing them makes them interesting as opposed to putting them in bins or boxes where they go ignored) and move down the line from one activity to the next. Hannah picked up a little metal paint pallet first and placed the accompanying rainbow-colored puff balls in the circular spots where the paint goes. Then she moved on to the empty shaker (like the kind you'd find at a pizza joint full of either garlic, red pepper, or Parmesan) and began filling the holes with the accompanying plastic green sword toothpicks which dangled nicely once all were in. A lot of the activities at the toddler age emphasize the pincher grip to ready them for holding a pencil.

On the next book shelf over she found various bowls full of various trinkets, and she got a kick out of mixing them all into one bowl. Ms. Beth showed then showed her how to sort them, an activity she indulged in for a bit but quickly lost interest in. 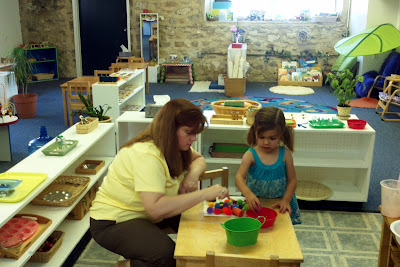 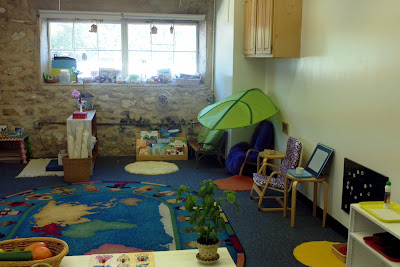 On the other side of the shelves Hannah found a 5-gallon water jug and a basket of ping-pong balls and got to work filling the jug. 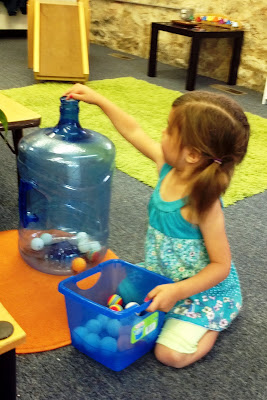 Dot painting ended up being a favorite activity of Hannah's during camp, and she came home with a ton of really great paintings made with these little bingo markers. 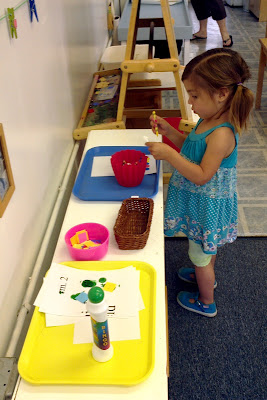 Cooking is another of her favorite activities so when she found the fruit and little glasses she began baking a "vegetable pie" using the shelves as an oven. I attempted to cut out this little boy from the photo in case his mama didn't appreciate him being on the internet, but I probably should have just left him in the shot since his half-face is probably worse than just posting an anonymous photo of someone else's child. 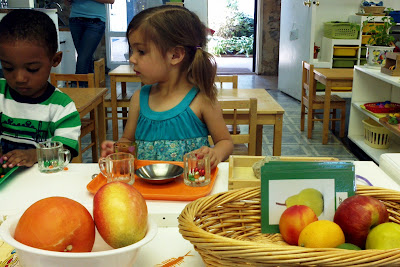 Here she is doing some more sorting, this time according to her own set of Hannah principles. 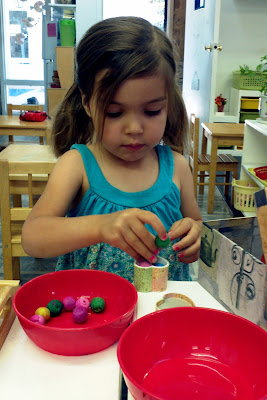 I scoped out this old-school vanity with its super old-school phone before Hannah did and wondered how she'd react to the Victorian phone and if she'd have any idea what it was. 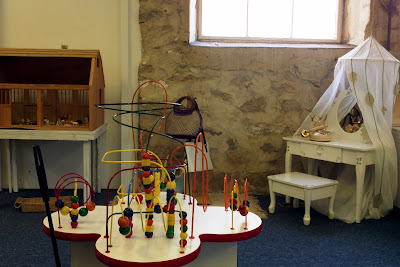 She did. I guess its intuitive or some sort of cosmic knowledge available to all people. She didn't play with it much though preferring instead to look at herself in the mirror. 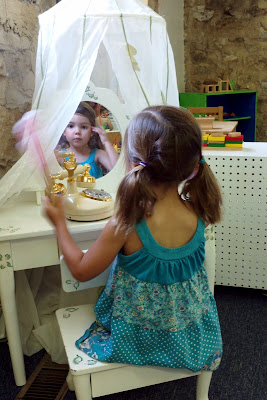 After the meet-and-greet we headed outside to explore the playground. There are two of those little plastic play houses and a plethora of plastic cars and trikes that captivated her so much so that she hardly even played with the playground part of it. 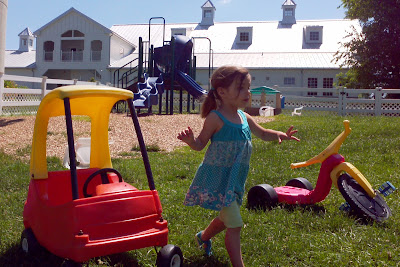 I love that this place is an old restored farm house and took a few outdoor shots so you could see how idyllic the setting is. This was one of our big selling points and one of the reasons I'm glad we didn't get into the public charter Montessori. Sure, free would have been incredibly awesome, and the school itself seemed great from the open house I attended, but it is in a really blighted neighborhood so the view from the playground (through the chain link fence) is of row upon row of boarded up row homes. Since we live in the city, I was pretty desperate to find Hannah a school located outside the concrete jungle. This private Montessori isn't fair from us at all, but it's far enough to smell and sound and look like the country. 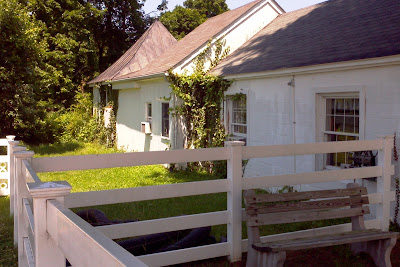 This is another view from the playground, this time of the breezeway that leads to the individual classrooms. 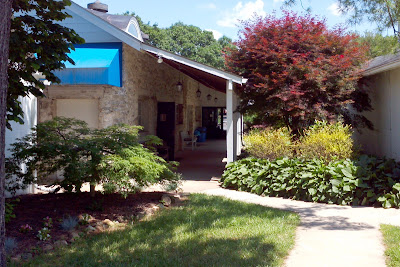 This is the front of the school taken from the parking lot. 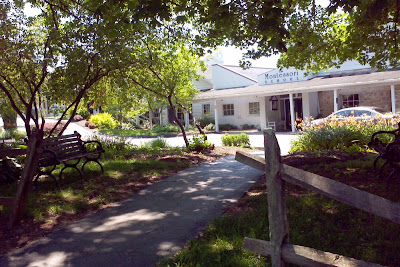 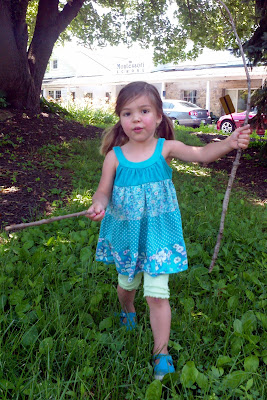 We had a really fun morning, and she had a fun 2 weeks at a camp at the end of June. I had to send Grammy with her on her first day because I had to teach, but Hannah adjusted quickly so Grammy was able to hang out in her car with a book. I tried to go in on day two in case Hannah still needed some adjustment time and also because I wanted to meet the teacher, but her teacher's aid met us at the door and after a nice greeting, she quickly swept Hannah away while I walked back to the car feeling a little forlorn. Their philosophy is that it is easier for the kids if they leave the parents rather than the parent leaving them. I get that, but I was still a little bummed.

Camp was for 2 hours every morning for 2 weeks. This is a lot for Hannah considering she has never in her life had to wake up and do the same thing every day of the week in her entire almost 3 years of existence. It was also a lot more time away from me than she's used to, and as a result, there were some mornings when she didn't want to go. On a few days, I bribed her (this is how we ended up with  a Ladybug Girl obsession but that's another blog post). I used the car pool option the rest of the days and let her assistant teacher help her out of her car seat and then help her back in at the end of the morning.  At the end of the day, the teaching assistant always raved about how engaged Hannah was all the time and how well she did. After a few days she asked if Hannah was enrolled in the fall and was relieved when I said yes commenting that Hannah is definitely ready. That was nice to hear! Hopefully she'll be ready for the primary program in the fall and will adjust to being gone every morning quickly.

Some things I love about this style of teaching/this school:
Hannah isn't even a student yet, and I have a lot more reading up to do on the subject so I'm sure I'm missing a ton, but these are the initial things that attracted me to this style of learning. Now, if you'll excuse me, it is way past this pregnant lady's bedtime.