My class is over; my grades are submitted--wohoooo!!! Catching up on blog posts is next up on my hit list of things to accomplish so expect constant blogging this week. My goal is to blog so much that it's my readers who have to play catch up.

My self-diagnosed mini case of OCD insists upon chronological order so next up after the daddy/daughter/neighbors camping trip is this year's family reunion which was on June 16...almost a whole month ago. We all take turns hosting, and this year my aunt Pam volunteered. This is a pretty easy drive for us so we just made it a day trip.

I don't have a lot of stories for the pics since we pretty much just hung out and ate like we do every year, but I feel the need to start by explaining the fighting sticks in the first pic. Eric should really have some sort of toy man nickname because prior to us pulling out of Bemore on any sort of a day trip, he fills the trunk with as many toys as he can squeeze in. Lately he's really into these fighting sticks he has so he threw them in before we left for the family reunion, and once at my aunt's, they were the first thing picked up. Clay loved them, and I'm pretty sure Chip did too. 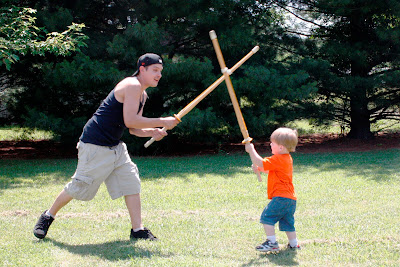 Since I don't have stories for all the shots, I'll just use captions.


This is too much for a caption: when I was a kid, my favorite thing to do when I stayed with my aunt and uncle was to search the driveway for lucky beans. I should be the luckiest lady alive considering how many of those things I collected, and I suppose in many ways, I am. Anyway, I was really excited to share that past time with Hannah. Of course, for the first 4 or hours, she had no interest in looking for these lucky beans, no matter how excited I was. Eventually I gave up and decided to go with Clay, and of course then she sang a different tune. She carried the green bucket Grammy brought, and Clay pulled the little red wagon, and we marched our procession down the gravel driveway looking for lucky beans. I never knew it as a kid, but apparently they're seeds from a cigar tree. I have no clue if that's the real name of the tree--my uncle Bob said that's what people call it because it drops these long brown pods (full of lucky beans) that look kind of like flattened cigars.

We loaded up the wagon and bucket and then headed back to the yard to inspect our booty. 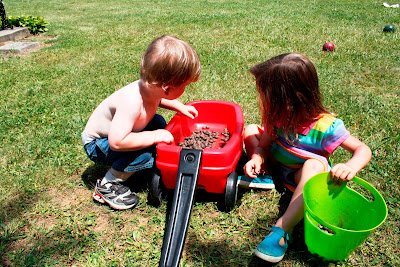 In addition to sword fighting, bean bag tossing, bubble blowing, and lucky-bean looking, we did some exploring in the forested area that is part of my aunt and uncle's property. I was bringing up the rear in this group and liked how the others looked in front of me. I think I have a thing for pics of people walking away. I don't know why I have that thing, but I know I take a lot of pics like this.

So, we took off  in the woods and as soon as we were 3 feet in, Devon looked at me and said, "I think we're lost," and he was serious so I couldn't laugh, but I really wanted to. I assured him that we were fine and then I made sure I stayed close and also that Chip didn't get too far ahead which he did at one point and it clearly made Devon nervous--I don't think he liked the idea of being lost in the woods with just me, and really, that's a valid worry. I wouldn't want to be lost in the woods with me either. 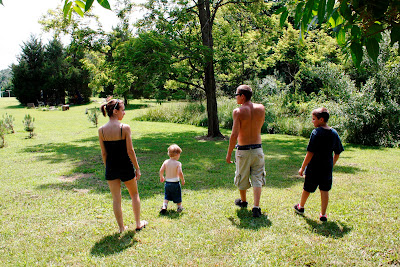 For never having family reunions growing up, we are totally rocking at it now. I think this was our sixth year...maybe? I'm sure someone will correct me. Anyway, it was another great day with the fam, the kind of day that makes me wish we all lived just a little bit closer so we could do it more than just once a year.
Posted by terri at 9:31 PM