Hannah gets a fish

Many, many moons ago, on the evening of HonFest while Hannah was camping with her dad and the neighbors, a little girl who lives around the corner and absolutely loves Hannah called on the phone and asked me if she could bring over a fish for Hannah because she had already won three that day at HonFest. I said no as gently as possible explaining that fish are a pain to clean up after and they smell terrible if you don't clean up after them. She then launched into a detailed explanation of how to clean out the fish bowl beginning with removing the the fish and placing it in a separate container. It was a super detailed, step-by-step explanation and quite exhausting to sit through. I protested a few more times and wondered where her mother was while her daughter was pushing an unwanted fish on us. I was trying to do school work, taking full advantage of having the night off from parenting and here I was sitting on the phone listening to a 10-year-old prattle on incessantly about how easy it is to take care of a fish. Eventually I gave up and told her to bring over the fish. I filled a vase with water and dumped in the fish along with some flakes of food.

When Hannah home a found a fish on the table she was thrilled, as I expected. We carried the fish around in that vase for a few days, moving it from room to room depending on where she was. She talked to it and even tried to pet it. 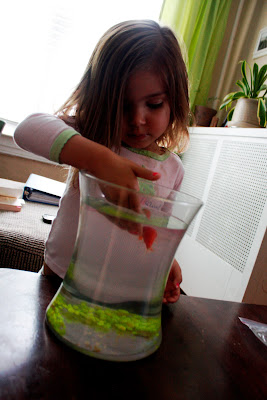 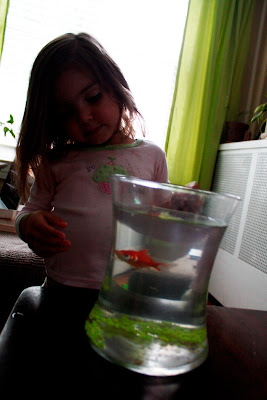 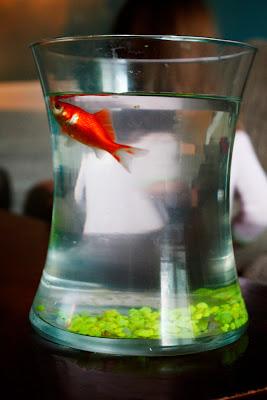 The following Monday I stopped off at Shannon's to pick up her fish bowl since Atticus' fish had just croaked. It was shorter than the vase, but rounded and seemed like a great place for a fish to spend what I hoped would be a short life.  Eric totally rejected the bowl and insisted that we give the fish a fighting chance. He came home from the pet store with this 2.5 gallon tank with a filter. This miniature getup was $50.  Insane! 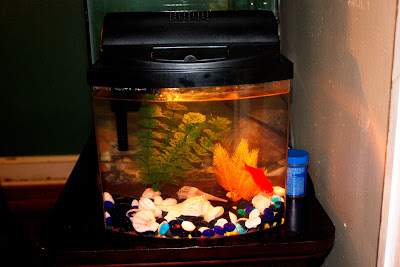 (Sorry about the picture quality--I suck at taking pics in the dining room--my camera hates that lighting unless I change the white balance and I always forget to do that.)

In less than a week, Eric had determined that 2.5 gallons was not enough space for this goldfish and decided to act on a long-term dream of his to have a big fish tank. (This is not a dream he had ever made me aware of.) He got on Craig's List that night (what we should have done the first time) and found this 38 gallon tank for $75.  He left the house at 9:30 at night and drove to Anne Arundel county to pick it up. Excited much?? 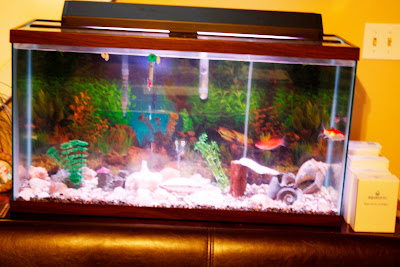 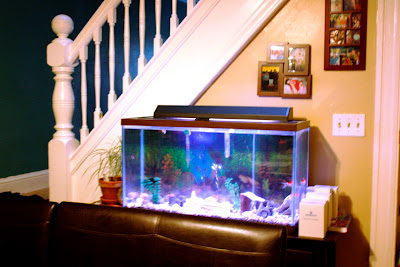 Of course, once we got a bigger tank, we needed to fill it...We now have four goldfish: OG (the original and first fish), Pig (who is either OG's best friend or arch nemesis--I am having a hard time interpreting fish behavior but the two are always together), Hercules (a little round fish with tiger-colored splotches and bulging eyes), and Midnight (also round with bulging eyes but black in color).  We also have an algae eater who is unnamed so far--he just moved in yesterday.

The reason I didn't want the OG fish is because I once owned a beta fish and found that cleaning its vase every week was annoying, and then it died and that was super gross. I'm not good with dead things. I also fish-sat for Shannon once while she was in Greece for 3 weeks (we were roommates then) and all of her fish ate each other while she was gone. I'd come home and find a headless one or a stomachless one floating at the top and then I'd have to find someone to scoop it out because there was no way I was going near that gnarliness. It was seriously gross.

Those experiences convinced me that fish ownership is not my thing. Sure they're nice to watch and I love the atmosphere of having them, but I don't want any part in taking care of them. Fortunately, I don't have to! I get to sit back and study the relationship between OG and Piggy and enjoy the atmosphere and do none of the work, and when one dies, I will be avoiding that room until it is properly disposed of. This is totally Eric's thing, and he's excited about it and loving have full responsibility.

So we're a fish family now. A goldfish family.
Posted by terri at 10:05 PM