Cooling off at Cunningham Falls

This is it: the last post from June! I think I only have two from July so that shouldn't be as daunting, and then I'll be caught up, and that will be beyond amazing.

You know that crazy storm we had at the end of June, the derecho that knocked out power for days and made Baltimore look slightly post-apocalyptic with all the felled trees and the giant sinkhole that opened up at the intersection of 37th and Keswick? That sucked. Well, this is that weekend that I'm flashing back to.

So the storm hit before midnight and woke us all up. Hannah came into our bed because holy cow, that was some seriously scary shit, and we all laid there wide awake but wishing we weren't while the lightning lit up our bedroom like a non-stop strobe light and the thunder rumbled without rest for at least an hour, or maybe it wasn't, but it sure felt like it.

The power went out in the midst of it, and an eerie stillness enveloped the house. The air grew more and more stifling as the air conditioning succumbed to the near 100 temperatures raging outside (maybe it was slightly cooler at night?? It didn't feel like it). I didn't sleep well as a result, and when I woke up the next morning, I was exhausted and freaking out about what to do with all the food in the fridge. Eric got up super early and went for a run (which he said was awesome because he got to check out all the crazy damage the storm did), and then I sent him out for bags of ice to load up the fridge. We packed up a cooler then with as much of the portable food as possible and drove to Cunningham Falls to meet my dad and brother and his family, AND, as a bonus, we also met my friend Brian and his family who I hadn't seen in years. Unfortunately, I didn't end up with any good pics of them since the main time we all hung out was during lunch, and I wasn't so snap happy then.

A day at the lake in the mountains was a good call. 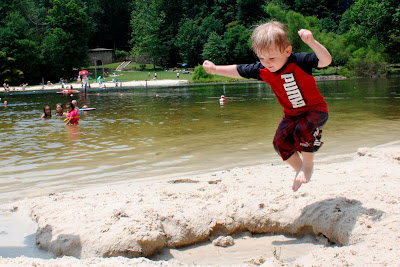 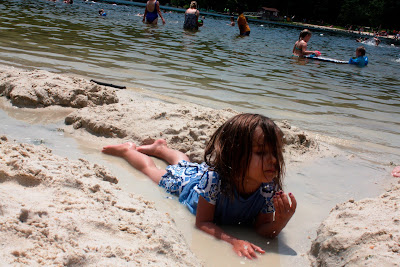 After swimming for a bit we headed back to our little picnic table nook in the woods and Hannah curled up on a sunny rock like a snake. 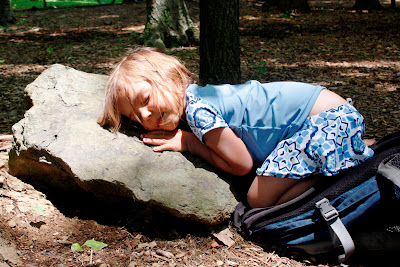 And then ate a blueberry bagel. 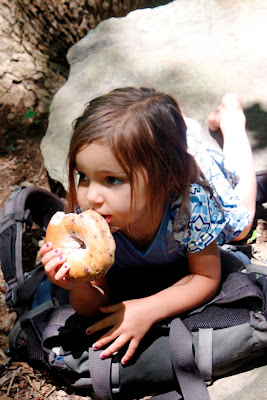 I don't take a lot of pics of Eric all by his lonesome, but he looked so nice sitting on this rock... 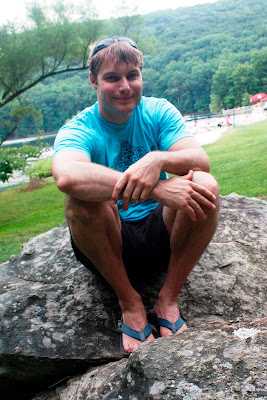 Hannah has decided that she often doesn't want her picture taken, at least not as often as I try to take it, which is probably understandable, but to emphasize this point, she covers her face. Clay must have thought it a good idea because he followed suit. 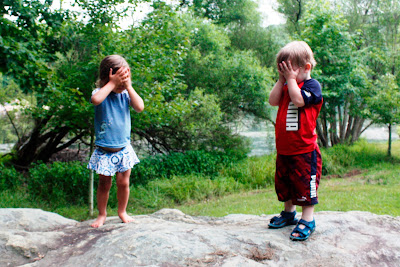 The kiddos wanted to hike upstream for a bit so we all clambered in climbed around. 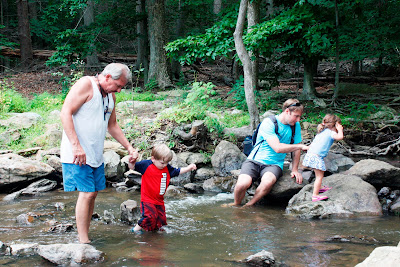 We made it all the way to the tunnel and then posed for a few silly pics before heading back to the beach. 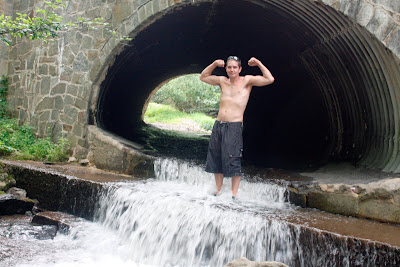 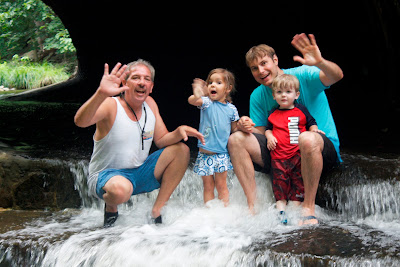 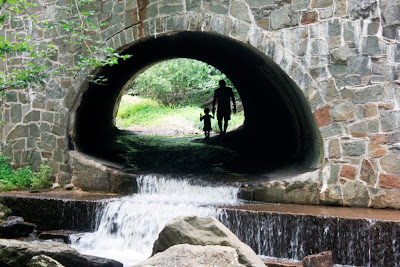 On the way back we found a many-legged insect (I don't know the difference between a millipede and centipede). Hannah put it on a stick and carried it around for observation. 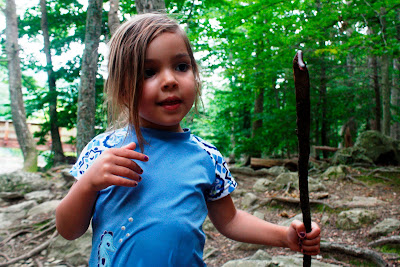 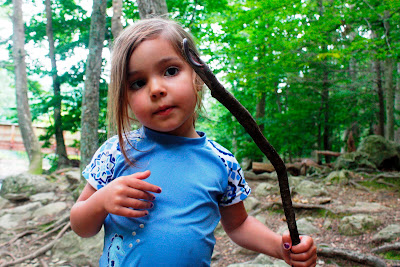 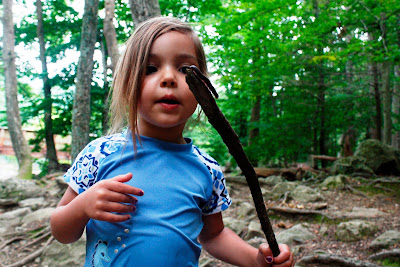 And then we made it back to the beach and snuggled in the inner tube for a while before leaving the mountains and heading back to the insane heat of the inner city. 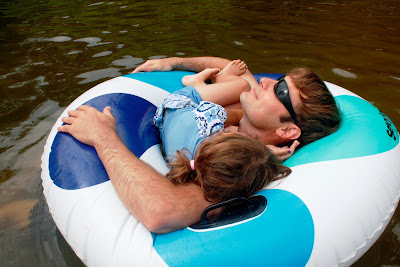 We returned to an increasingly sweltering house and after bathing Hannah and putting her to bed, Laura and I went out to see a show leaving Eric in the dark to watch a movie on the portable DVD player until the battery died. I felt bad, but we'd made those plans a few weeks earlier, and honestly, even though I was exhausted, it was awesome to hang out in some air conditioning for a few hours.

I came home late that night and after sweating through another sticky night, started calling hotels in the morning. We'd kept the windows and blinds shut in an effort to keep out the heat, but 100-degree heat can't be bothered by blinds and curtains, and it forced its way in regardless and was taking over. It was more than the heat though and the dark (which I am, admittedly, a little afraid of), it was the claustrophobia of it all. With the windows and blinds blocking the sun all day and the lack of lights and the sweltering heat, I felt like the city was closing in on us.

A Facebook post revealed the generosity of the few friends who had power, and one such offer was unbeatable. We moved into Erin's and Ryan's immediately since they were out of town, and Hannah loved playing with Brody's and Addison's toys so much that she didn't even ask to watch TV even though that was the one thing she wanted most during the power outage. I was worried that she wouldn't sleep well in a new place but I guess knowing that it was Brody's bed was soothing because she slept soundly through the whole night.

Our power came on the following afternoon (Monday afternoon), so we moved home. We made it through the derecho and massive power outage unscathed and all the more grateful for the awesomeness of electricity and good friends (and family days at Cunningham Falls).
Posted by terri at 9:18 PM