Autumn was back in the country briefly in the beginning of July and one of her requirements for visiting was that we make a day trip to one of the many area tourist attractions that locals don't take advantage of. We threw around a few ideas (Philadelphia, Harper's Ferry, Gettysburg) and settled on Amish country outside of Lancaster. We thought we'd tool around downtown Lancaster too while we were in the area but time did not end up permitting that.

We drove to Kitchen Kettle Village located in Intercourse, Pennsylvania and made a beeline for the ice cream place. I promised Hannah an ice cream cone first thing, and she wasn't about to let me forget. She chose strawberry, as usual, and dripped it all over herself in the process of thoroughly enjoying it. Also, you don't have to look too closely at the pic below to see that she is wearing one pink sock. I don't know why she woke up that day and put on one pink sock, but I was unable to change her mind. I did manage to strip it off her sweaty foot much later in the day. 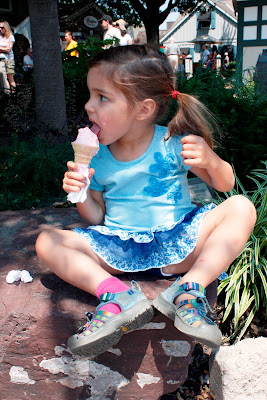 Kitchen Kettle Village is mostly a bunch of country craft shops, stuff that doesn't interest any of us, but there was a jewelry store Autumn browsed and we all liked the store that the village is named for.  It's full of thousands of jars of everything you could think to jar or pickle in every flavor you could imagine and there are samples of everything so you just walk around the store tasting everything. The pic below is just a random bench and is not in front of that store...There's also a little petting zoo on the other side of the parking lot where we hung out for a bit. 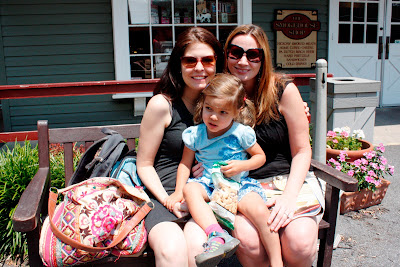 We bought tickets for a buggy ride next and opted for the hour long tour that stops for a half an hour to tour an Amish farm. We figured that was our best bet with Hannah and we were all interested in seeing an actual farm up close anyway. The driver let Hannah sit in the front with her. I snapped some pics before we took off. 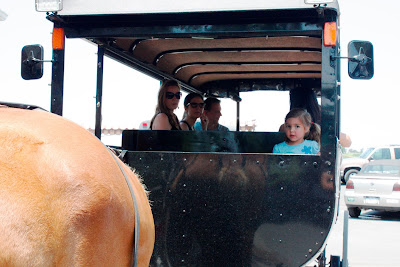 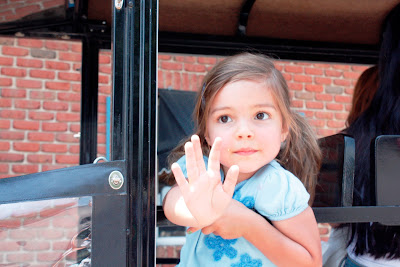 And another one while riding. 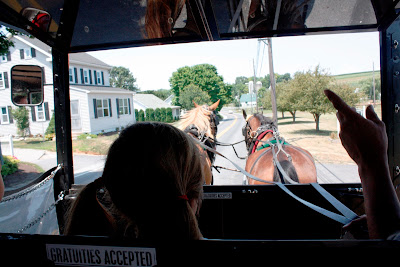 Our driver was an Amish woman (obviously) who took a liking to Hannah. After helping her out of the buggy, the two held hands and toured us around the farm. 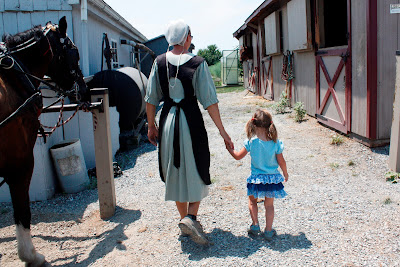 The buggy below costs around $8,000 (without the horse) and is designed for a family (there's a little backseat). I think she said that unmarried Amish people usually ride in a buggy without a roof.... 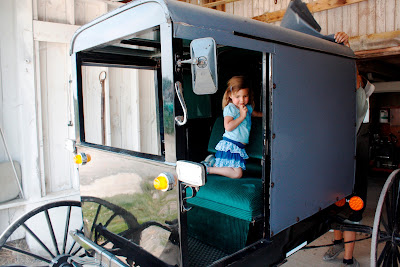 There were lots of baby animals on this farm to pet, especially cows because most Amish people have dairy farms. They have fields and fields of crops that go to feeding their animals because dairy is their livelihood which makes me think they should get rid of the animals and just eat veggies that they grow for themselves (they do have a garden for themselves) and then they wouldn't have to work so hard, but I guess then they wouldn't have money for $8,000 buggies and other stuff they need. 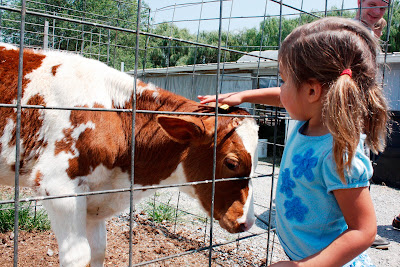 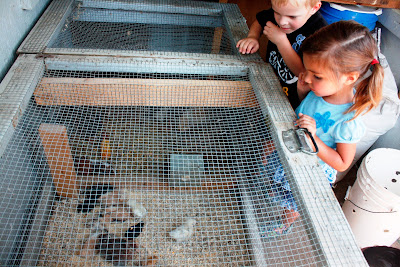 I love the sight of laundry hanging to dry. I can't wait until we have a place where I can string up a clothes line and line dry some stuff! At the very least I'd like to line dry diapers when the time comes again.... Probably not clothes because I remember them just getting crisp in the sun, but definitely diapers. 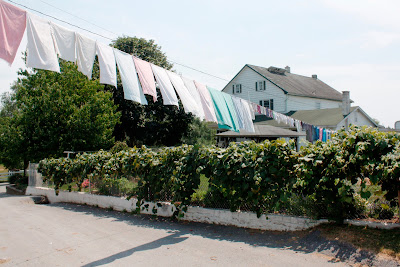 After we toured the dairy farm and learned about the average Amish person's day and habits, we cooled off with the most delicious lemonade I have ever tasted. I'm not a big lemonade fan and find that it usually does the opposite of quenching my thirst but this was perfect and refreshing and not too sweet. I didn't get much of this awesomeness though because I opted to share with Hannah and she kept the straw in her mouth until it was empty. 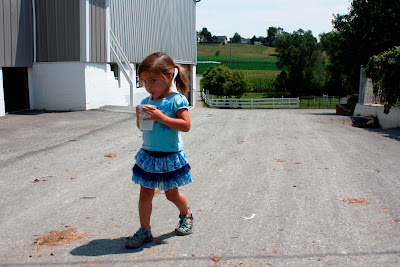 One of my favorite things that I learned (that I did not get a picture of) is that Amish people use phone booths to make phone calls. They do not have phones in the home. As we rode to the farm, we passed by this tiny little booth on the side of the road where they go to make their calls. They think it's rude to be interrupted at home. Interesting, huh?

When we returned to the village, our awesome driver/tour guide took a group photo. 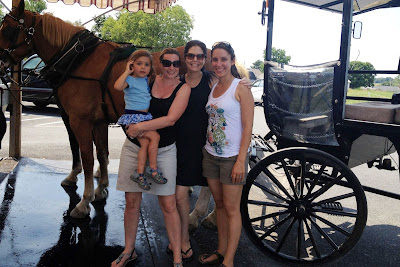 Then we headed down the road to a place called The Amish Village. it's this authentic Amish house that's supposed to be set up the way the Amish live (though I obviously can't speak to its authenticity since I have not been in an Amish house where Amish people live). We had a tour guide take us from room to room explaining all the stuff and their lives. Since they don't have electricity, they put their lamps on little wooden cabinets on wheels and hook them up to a propane tank they keep in the cabinet, then they wheel it around to wherever they need light. Since they are okay with using gas, they'll buy a lot of electrical appliances that we might have (like KitchenAid mixers and washing machines) and then they'll rework the guts of the machines to make them run on gas. Pretty genius!

Another interesting fact, they only paint their interior walls in shades of blue and green, and I think white too. I forget why though...I think because they are the colors of the sky and earth and....hmmm...We also got to see their outfits. They don't wear any big buttons or brass buckles or anything because it reminds them of the soldiers who were mean to them in Europe before moving to America. And what the women go through every morning to get dressed is crazy. They pin on their aprons with straight pins. I don't know why they wouldn't just make the aprons tie in the back or sew them directly to their skirts, but this is coming from someone who lives in yoga pants, someone the Amish would probably regard as incredibly lazy. Apparently they can put in all the straight pins in a matter of seconds with their eyes closed. It's crazy what you can do if you just make up your mind to do it regularly. Habits are amazing things.

Outside of the house is a yard area with a barn and various Amish buildings like a general store, tool shed, school house, etc. Speaking of schools, did you know that they have a super old-school style school with all the grades in one classroom? The teacher is a young unmarried woman who accepts the role. She has no training, just teaches them what she learned. When she gets married, they have to find another woman to teach. Once Amish women get married, they quit their jobs to raise families.

Alright, some random pics from the backyard area of the house. First, Mr. Ed. 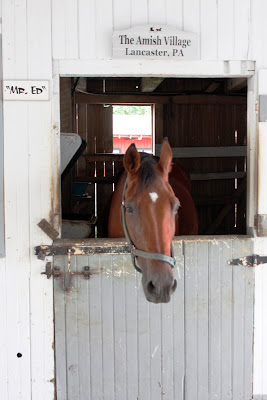 We were all in love with these baby pigs. Amy, being Amy, kept saying that she wanted to snuggle them so then Hannah got really serious about snuggling them, tried to climb over the fence, and was upset when we said no.  Whoops! Kids really can't take a joke. 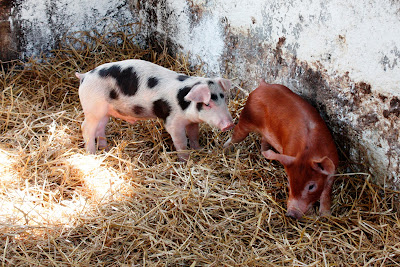 I got pics of the school house and stuff too, but they're not all that interesting, so I'll close with some pics of us posing in the buggy. 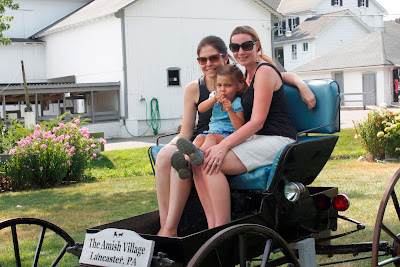 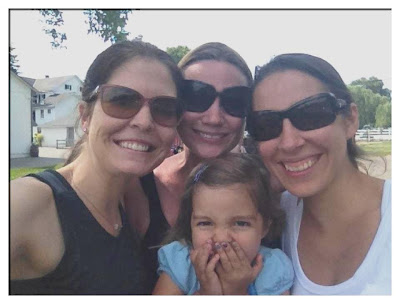 I had a great day hanging with some of my most favorite ladies and learning about a totally different way of life.  The Amish are fascinating!  Hannah was probably a little young to really understand or retain much, but who knows, maybe she's capable of more than I give her credit for. Either way, it was a good experience, and good experiences are good for shaping open-minded and educated children!
Posted by terri at 9:57 PM