When Lila was bestowed on Hannah, Hannah was still nursing three times a day and often insisted that Lila tandem nurse with her, so here I'd be, hanging out with two boobs out, Hannah on one and a baby doll on the other. I'm all in for a good game of let's pretend, but this one wasn't one of my favorites. I tried explaining to Hannah that she was Lila's mommy and could therefore nurse Lila herself, but that concept was lost on her.  Pretending Lila was nursing from me, okay. Pretending Lila was nursing from her, totally insane.  Is the realm of pretend a developmental thing that happens in stages/at certain ages??  Or do you think it's just because Hannah was still nursing three times a day back then and is now nursing not at all?  Whatever the reason for her refusal to nurse Lila herself, it's a thing of the past.  This week Hannah began nursing her own babies. I think it's super cute so I snapped a few pics of her nursing one of her smaller babies tonight during her bedtime routine. 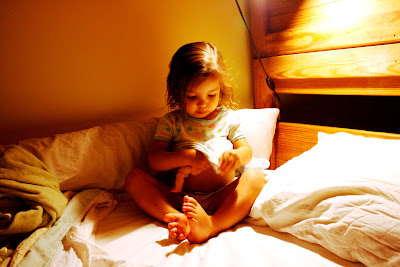 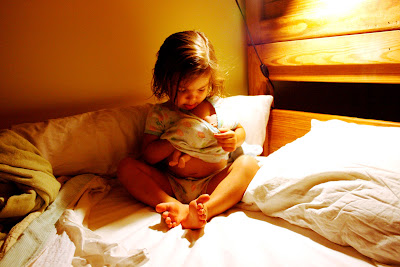 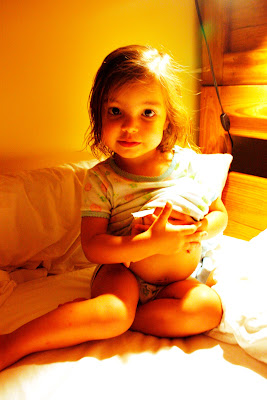 So, yeah, I think it's safe to say that Hannah is weaned now.  I started cutting her back in June, first eliminating the night time nurse.  By the time her second birthday rolled around she was just nursing first thing  in the morning, and by the time we got to Michigan a couple weeks later, she was rarely asking for boobies, and I wasn't offering.  There were a few weeks where 3 or 4 days would pass before she'd remember to ask for boobies, and although I let her take her time with it, if I thought she was asking because she was hungry or thirsty, I'd push food and drink. I think the last time she nursed was Labor Day after we got back from the State Fair....I think...So yay! I've got my boobs back!  And yay that Hannah has her own pretend boobies with which to nurse her babies!
Posted by terri at 8:42 PM