Hannah Milks a Cow at the Maryland State Fair

We spent most of Labor Day weekend being as lazy as humanly possible, but were itching for excitement by  Monday so we headed up to the Maryland State Fair. Eric, ever the spender, took his last $100 out of his allowance account and gleefully announced that he was going to spend it all at the fair. I rolled my eyes and told him that if he managed to do that, I'd reimburse him $40 from my allowance since that's the most I was willing to spend and it only seemed fair that I chip in.  Once inside the gate I ran off to the bathroom and met up with him a few minutes later clutching $45 worth of tickets in his hand....Let the rides begin!

I don't do rides, especially not rides that go around and around which is the case with most rides since the alternative would be riding up and back--and since that would require riding backwards, I wouldn't do that either.  That's okay though, there's a place for people like me on the sidelines. We are the ones who stand with the stroller and the backpack and whatever other accumulated junk, and we are also the ones take all the pictures. We allow the fun seekers to have more fun because they have less to worry about.  And I'm okay with not being fun in this regard because I consider myself a pretty fun person otherwise, and I'm pretty sure that Hannah would agree. 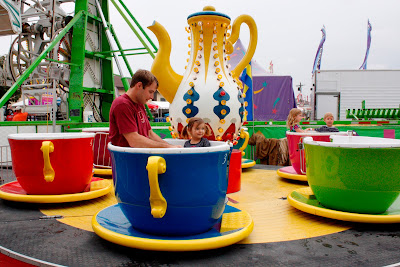 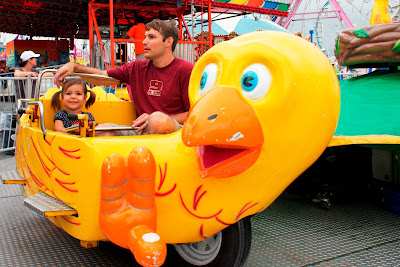 Between rides Hannah spotted a giant blow-up Dora doll.  Lucky for her Eric was eager to blow his cash so he propped her up on the table, paid the lady a few bucks, and helped Hannah fish out some fish until she had won herself the blow-up Dora. 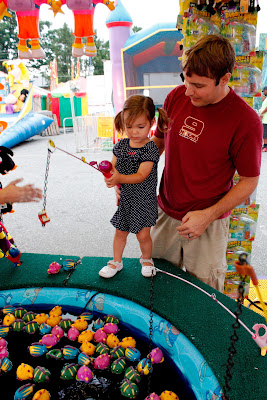 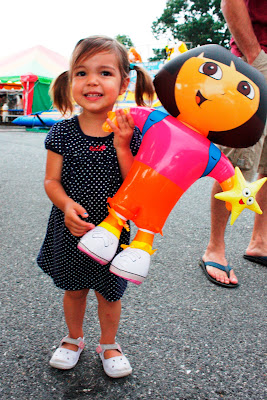 Her and Dora were thenceforth inseparable.  The man at the moon bounce tent wanted her to leave it with me, but she wore him down rather quickly. 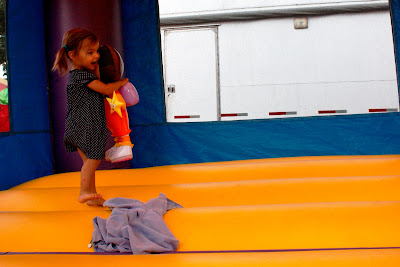 Dora also got a chance to pet nearly all of the animals in the petting zoo, including this nice, furry sheep. 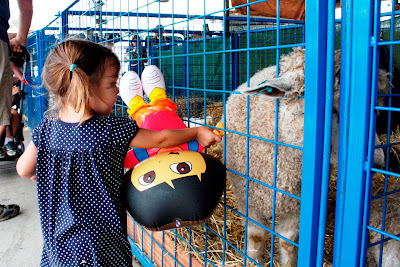 But even Dora can't compare to a slew of super cute, fuzzy little ducklings!  Hannah dropped the blow-up, held out her hands, and said "hold them, hold them," over and over and over again. 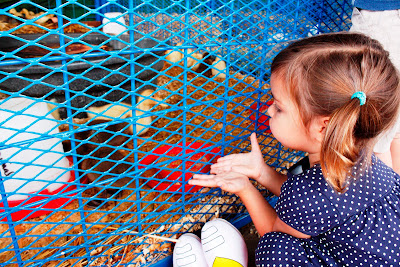 I looked around for someone to ask, and right then a young girl in a green shirt started to climb over the fence into the duck pen. Before she had both legs over I had struck up a conversation about whether or not they were her ducks ("sorta") and if my daughter could pet one ("yes").  Of course as soon as I asked about petting them all the parents who heard started getting their kids ramped up to pet a duck and then all the kids mobbed the area, eager for a touch, but the mob eventually died down and Hannah got some QT with the cute little quacklings, and I got my photo op.  I hope that someday we live someplace where we can have ducklings waddling around all cute-like in their fuzzy little coats. 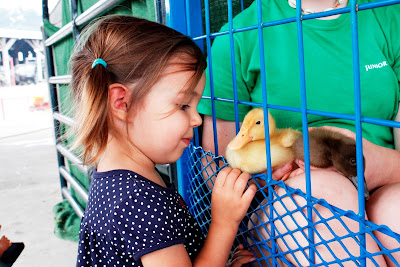 After the ducks we spent a considerable amount of time watching the piglets nursing from their mama pig. I explained what they were doing and Hannah was mesmerized.  (I didn't take a picture of that because they keep the pigs in a tall cage that can't be photographed through.)

Then I saw a sign that said "Milk a Cow," and I was off and running, dragging a less enthused Eric behind. He didn't get why I wanted to milk a cow.  I didn't! I wanted Hannah to. Duh!!!  Earlier that week I was telling Hannah about where cow milk comes from (as opposed to rice milk).  I ended up searching around for a cow milking video on YouTube which was far more illustrative than I was being, but hello!!! The chance to milk a cow herself is the ultimate icing on that little lesson! I really wish there was a 4H program for city kids... Hannah did awesome, and the cow milking was my own personal highlight of the day. 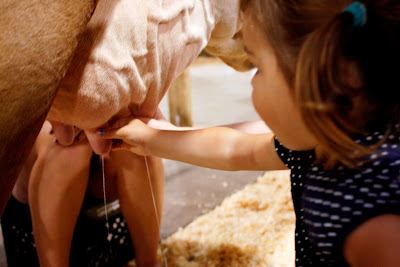 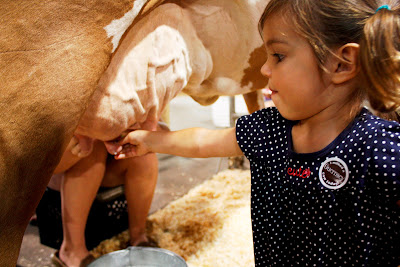 We grabbed lunch, and then Eric talked me into getting on the ferris wheel in an attempt to burn some of the billions of tickets he had left. When I say I get motion sickness I mean on everything. Seriously, everything. I can't ride in any moving vehicle unless I'm the driver. Roller coasters and anything on water leave me shell shocked for hours afterward.  I can't even turn in a circle more than once without getting dizzy and nauseas (which is a problem with a 2-year-old who's recently become obsessed with Ring Around the Rosie). It got so bad when I was super pregnant (like 8 months) that I couldn't do flip turns when I was swimming laps because the flip made me sick, and if the pool was crowded, I'd get seasick on other people's wake.  So yes, ferris wheels make me sick too, but I sucked it up and got on anyway. 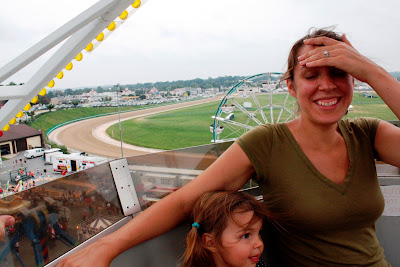 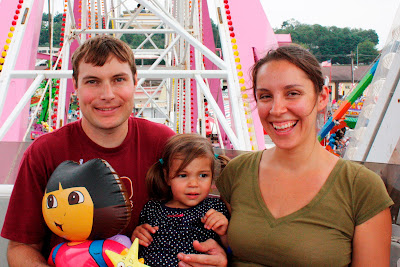 After that I started getting cranky, and Hannah started rubbing her eyes. It was past nap time for everyone, and I'd had enough of the chaos.  Lucky for us the cloudy day meant the fair didn't get hoppin' until around lunch time so we'd covered a lot of territory early on without waiting in lines and with no sun beating down on us either.  Eric picked up our not-so-subtle crankiness and started scrambling to use the last few tickets before the ladies lost it (no telling who would go first).  He took Hannah on the carousel and then the teacups again and managed to use every last ticket and spend every last dollar. 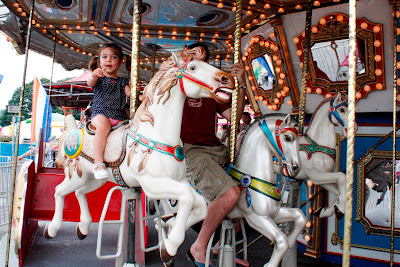 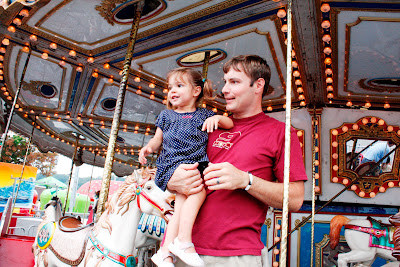 Then we peaced out.  Whew.  I love kitschy, all-American activities like State Fairs, but they sure are exhausting.
Posted by terri at 2:33 PM