Kaya has FIV, kitty AIDS.  Crazy, right??  Eric was astonished and wanted to know how she could have kitty AIDS if she wasn't having any kitty sex.  The vet explained that FIV is most often transmitted through bite wounds.  She was attacked back in 2007 and ended up with two pretty bad bite wounds that cost me $500 at the time to fix.  Now it's a few years later and we've already shelled out almost that much just to find out what was wrong and get her started on an antibiotic.  I'd like to find the punk cat who did this...

Last Friday, after 3 days of extreme lethargy and not eating, drinking, or eliminating anything, I realized that something was seriously wrong and called the vet. Hannah and I skipped our Friday morning swim and raced Kaya to the doctor. Before we did that, Hannah was being really sweet, covering Kaya with her blanket and saying, "Feel better Kaya? Feel better??"  As I watched Hannah trying to comfort Kaya, it occurred to me that I don't have any pictures of Hannah and Kaya together (because Kaya runs like hell when Hannah tries to play), and that since Kaya was pretty seriously sick, that particular scene could be my only photo op, so I took it. 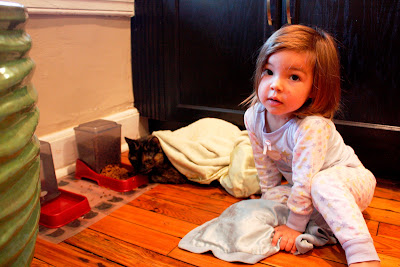 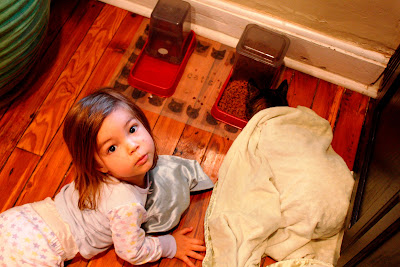 The antibiotic is kicking in and although Kaya still has a very small appetite, she is moving around and seeming healthier.  I don't know what's next. I guess we'll just have to wait and see how it affects her.  Since she has lost 1/3 of her body weight in the last 2 years, I don't imagine she has a lot of time left, but who knows.

Oh, and see that red mark on Hannah's left cheek?? That's a flea bite. Awesome, right?  They love Hannah and bit her to shreds for days while I frantically researched bug bites online trying to figure out what was going on.  I thought fleas would be easier to see, but they're really not. We've been vacuuming and cleaning and washing sheets like mad, and as a result, Hannah is waking up with fewer bites each morning, but I can't keep that kind of cleaning up, and it's not enough anyway so I agreed to some Ultracide...It's supposed to be non-toxic once it dries....I'm a little skeptical, but I'm willing to take my chances. After all, fleas caused the bubonic plague, did they not??? Given a choice between the plague and toxins, I'll take toxins.

Speaking of, Hannah and I need to get the heck out of dodge this weekend while Eric does de-fleas our house....anybody want visitors???
Posted by terri at 7:54 PM

Email ThisBlogThis!Share to TwitterShare to FacebookShare to Pinterest
Labels: animals