One step closer to being potty trained

Big news in the realm of potty training: little Miss Hannah Jane left the house without a diaper today and made it back after a morning of gymnastics and grocery shopping in the same clothes she left in, i.e., no accidents!!!  I should note that this was not my idea.  She refused to let me put her in a diaper, and eventually, I grew tired of trying to talk her into it and begrudgingly let her have her way.

She's been doing great with using the potty when at home, and she's even been sitting on the "big potty" lately (pooped on this afternoon!), but I've been hesitant to take it to the next step and unsure of what that next step is. I mean, what's the in between step between being potty trained at home and fully potty trained?  I didn't research it and have no clue what other people do, but I think we did a good job of winging it.

First, I laid one of those pee pad thingys horizontally in her car seat.  You know those things that you put on the changing table or in their beds when they're super little to keep them from constantly leaking all over everything? No clue what they're called, but it solved my fear about her soaking her car seat.  I don't actually know how well it works since she hasn't peed on it (yet), but I feel pretty good about it.

Next I packed an extra dress and an extra pair of underwear. I never got into the habit of carrying extra clothes with me when she was little because I figure I'm never that far from home that I can't just take her home in case of some crazy blow out, but now it makes a little more sense.

Then I packed the potty. Yep.  I took the whole potty with us. We have two potty's actually, one that's a bit less portable and stays put in the main bathroom and one that is super light and simple and travels with us throughout the first floor, onto the back porch, down to the basement, and most recently, on car trips.

I took her straight to the bathroom once at HoppinTots and every time she so much as moved her hand in the direction of her crotch, I raced her to the toilet.  She peed on the potty three times while at gymnastics and then again in the parking lot after gymnastics on her little potty (which I emptied into the bushes--no worse than your dog peeing everywhere, right?), then again in the parking lot at Whole Foods before going in to the store, and then again after the store before getting into the car.

A toddler in public without a diaper is a little stressful and requires diligent observation. I had to take a nap after all that!

So yeah, big day for Hannah!

Pee pee aside, here are some miscellaneous pics I've taken in the last week or so....
Grammy ended up with an extra little pool that she sent home with us.  We managed to squish it into a corner of the deck, and Hannah spent the remainder of this super hot weekend skinny dipping on the deck. 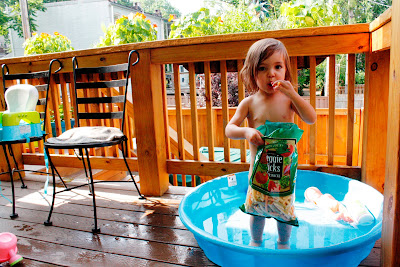 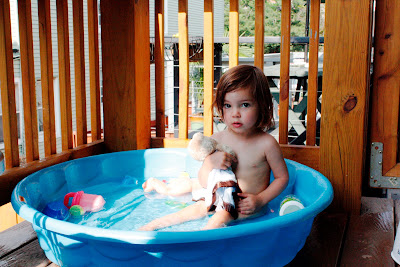