We had a very Terri-centric weekend around here: Friday was military spouse appreciation day, Saturday was my birthday, and Sunday was, of course, Mother's Day.  Wahooo for me!!! Sadly for Eric, he spent all his fun money for the month in one weekend spoiling me....And now needs to borrow money to pay for his mountain bike race next weekend.  Siiiiigh.  The price of being spoiled.

Also as a result of the upcoming race, Eric had to take off on Saturday morning to ride.  No problemo--I got in some good quality girl time with Jessica and Hannah.  We went to Federal Hill to check out the opening ceremonies for the Kinetic Sculpture Race.  It was Hannah's first time at the race and the first time I made it to the opening ceremonies.  We watched the mayhem from the hilltop, trying to figure out what was going on, and then followed the parade of crazy bicycle sculptures around the park as they raced up Battery Avenue. 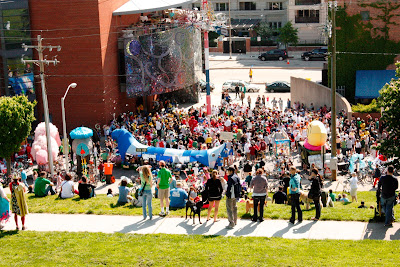 Once they started racing up Battery Avenue, we found a nice, sunny spot and spread out a blanket. It wasn't the best angle for snapping pics, but I was too lazy to move. 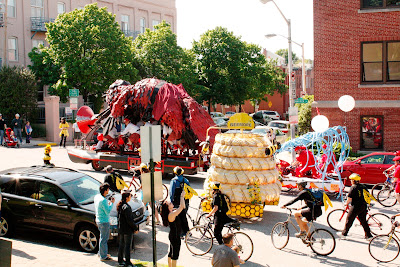 I liked the snail. Every few minutes an arm popped out from beneath the curtain, pointed toward the snail, and said "snail!" 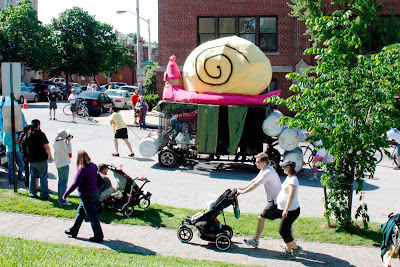 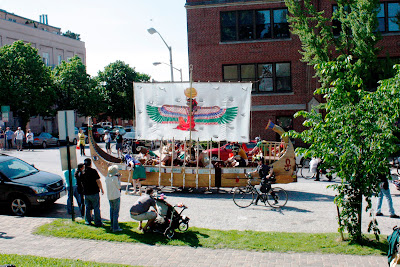 When the mayhem stopped we putzed around the hill for a bit and lamented about not being able to get into the playground (private party doing their thing).  Hannah paused by this tree, admiring the textured trunk.  (Please note that I suggested she not wear her boots on such a warm day but she seemed to think them the most fashionable choice for this outfit and was willing to deal with sweaty feet to make this fashion statement.) 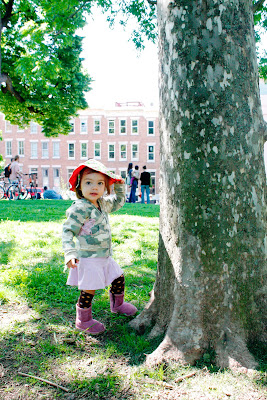 After the putzing we grabbed lunch at Sam's Bagels (thanks Jess!!) and headed to Riverside Park to eat lunch at a picnic table beneath a shade tree from within the fenced playground.

Hannah napped well after that morning, and we headed to the Flower Mart when she woke up to buy some tomato plants, then to check out a new sushi restaurant that opened in our neighborhood. Loved the restaurant!! Hannah tore up the gyoza, edamame, seaweed salad, and sweet potato roll and did it all while running around the nearly empty restaurant.

I've been avoiding sugar lately for health issues (and feeling a ton better as a result) but no birthday is complete without cake.  While I was putting Hannah to bed, Eric ran down to Cafe Hon and picked up two slices of yellow cake with chocolate icing.  I savored it during the first part of 127 Hours and fortunately had it finished before the main character started drinking his urine and sawing at his arm.  Man. That guy is hardcore.  What a story to tell....I was horrified trying to think of what I would do in that situation....Probably best to avoid that situation altogether.  That's my plan: do not go climbing alone and get stuck under boulder. Check.

Oh, and the cake, delicious, but not worth it. I felt so cracked out after that massive dose of sugar.
Posted by terri at 9:07 PM