Guess who had to be rushed to the emergency room AGAIN?  Miss Banana had a fever seizure yesterday around 5:30 and stopped breathing.  This is probably the scariest thing that has ever happened to me in my entire life, not that it happened "to" me, per se, but you know what I mean.

The story is a long one; bare with me if you want the details, skim down for photos if you don't.

So, Hannah has had a cough all week that sounds like it has a lot of phlegm behind it, but isn't frequent so we've been paying attention to it, but assuming it's fine.  When Eric was sick a couple weeks ago his main symptom was a persistent cough so we figured she caught it and didn't worry.  That was stupid though because if we'd thought about it, we'd have remembered that Eric's cough was followed up by a very high fever (Eric's was 102.7 before I could convince him to take medicine).  He was incredibly sick, super sick, sicker than I've seen anyone get in a long time, but neither of us thought about that when Hannah started coughing, we just figured she picked up a little respiratory infection like the one she had over the winter which the pediatrician said is as common as a runny nose and no big deal.

Then on Friday during "Boobies. Books." (her phrase for her bedtime routine), I noticed that her skin felt outrageously hot. I assumed it was nothing since she had been running around fine all day (swimming and playing as usual) and seemed normal, but I took her temperature anyway, just to check.  When the thermometer beeped 102.7, I was shocked, but since she had no other symptoms and since I still wasn't remembering just how sick Eric had been, I didn't worry too much.  I got the baby fever reducer medicine and gave her a little less than the recommended dose for a 2-year-old and then put her to bed.  She slept well and her fever had gone down to 101 by morning so I didn't medicate her thinking the fever had a job to do and wanting to let it do that job as long as it stayed low while doing it.  I monitored her and it continued to go down all day. It was a low 99 when she woke up from her nap, and since she seemed fine and dandy, Eric took her to Kylie's birthday party.  In retrospect, this was a terrible idea.  I've alerted the hostess to Hannah's prognosis and she sent out an email to all attendees.  Hopefully all the other kids will be fine, but if one does end up with it, at least they know what they're looking for, hopefully before the seizure.

I didn't take Hannah's temperature after the party because she seemed fine and didn't feel hot.  We managed to get her to bed at 7:00 on the dot (a miracle for us), and she slept until 7:15 the next day.  That's the best she's ever slept, and it was definitely a sign, but when she woke up, her temperature was a perfect 98.7 so I assumed she slept off the rest of whatever was ailing her.  We went to the farmer's market and carried on with our usual Sunday activities and then put her down for a nap at noon.  She woke up an hour later and spent the rest of the day alternating between jumping on the bed and laying on it while saying "nap."  Lethargy due to a poor nap mixed with a little of normal Hannah hyperactivity seemed normal to me.

Then around 4:00 I noticed she felt warm again so I took her temp and the fever was back and up to 102.3.  What the heck!  I contemplated what to do--bring it down artificially or continue letting it do its job and fight off whatever infection it was fighting?? We gave her some juice and waited.  At 5:00 it was down to 101, and she was busy trying to put her shoes on to go for a walk.  That seemed like a promising sign, and fresh air seemed like a good idea.

We ambled slowly around the corner, but Hannah lost steam after about 5 minutes and asked to be picked up.  She had huge goose bumps all over and curled into Eric's chest saying "cold, cold," but her body was burning up.  We rushed back to the house and set her up on the couch with some juice and the TV.  We gave her some medicine, and I sat with her while Eric finished up dinner.  Then she wanted to nurse so I let her, and then all of a sudden she stopped nursing. I looked down at her and her eyes were glazed over and wide and not blinking, her tongue drooped out of her mouth, and her body was limp like a rag doll. I panicked and yelled for Eric to get in here, something was wrong, call 911. He took her from me and said something along the lines of, "what? She's fine."  This freaked me out even more. I grabbed my phone and dialed 911 but was unable to connect for some reason.  I yelled at him to get her dressed, and I grabbed my wallet and keys and slid shoes on.  She seized when he got her upstairs, and when I came up, I took one look at her (post-seize) and really lost it. Her lips were blue and she was clearly not breathing which I loudly and frantically pointed out to Eric.  He picked her up quickly and puffed air into her mouth which made her snap out of it. While he was doing that I had managed to get through to 911 but when I saw that Hannah was back, I told the operator to forget it and that we'd drive her ourselves. Union Memorial is barely 2 miles from here, and I knew I'd never be able to sit still and just wait. Better to keep moving and do it quickly.

Poor Hannah was practically delirious and just kept saying "mommy. mommy. mommy." over and over. I sat in the back with her and stroked her cheeks and held her hand and told her it was going to be okay but she was really freaked out (and rightly so).

We were rushed to a room upon arriving and a flurry of nurses gave her her first IV, took her temperature in her butt, and poked and prodded her in a number of other ways that must have felt like torture to her and made her scream and cry like crazy.  The hardest part for me was knowing that she had no idea what was going on and that it was probably more terrible and traumatic as a result of that confusion. That's what broke my heart the first time we landed in the ER too, that idea that it must be so frightening for her.

When they were finished with their poking, I laid down with her in the bed and nursed her until they showed up with an unneeded wheel chair to take her to have her chest x-rayed.  Then back to the room to wait and wait and wait and wait and wait. Her fever was gone by this point, and her heart rate had returned to 120 (it was 165 when we went in), and she was back to her normal self, talking to the nurses and trying to run barefoot around the hallways of the ER.

I took a phone photo of her in this recovered state.  She's pointing to her "owwwie" (IV).  Yes, that's Elmo beside her.  Amy took her out on Saturday and bought her a Tickle-Me Elmo to indulge her obsession.  And no, we didn't think to grab that on our way out the door (we didn't even bring Hannah's shoes or diapers or anything, but I did bring a pair of pajama pants for her for whatever reason....).  We called Laura later when things were settling down and asked her to bring Hannah's Lovey.  She showed up with Elmo under the other arm.

The results for strep and the flu came back negative, but full blood tests take 4 days.  The chest x-ray showed some mild pneumonia ("mone-E-ah," Hannah repeated).  She was also pretty dehydrated so the doctor ordered another bag of fluid, followed by a bag of antibiotics, followed by an orally consumed antibiotic.  We were discharged at 11:30 p.m.....Hannah had taken a 45 minute nap that day so she was beyond tired (but still going strong as is true Hannah fashion).  I was also beyond tired and starving since we'd run out of the house right before dinner.  By the time we'd gotten home, showered off the ER, and scarfed some food, it was 1:00 a.m. which is so far past me and Hannah's bedtime that it's incomprehensible to me how we were both still standing.  She definitely handled her exhaustion better than me.  Luckily, she went right to sleep. I was so shaky and feeling so cracked out by this point that I don't think I could have handled a long, drawn out bedtime. I stop functioning properly at 10:00 on most nights.

She slept until until 10:00 a.m. today and then spent much of the morning watching Sesame Street and drinking juice boxes. I told her she can have as much juice as she wants today and watch as much TV as she wants too.  She looked so cute I had to snap another pic. 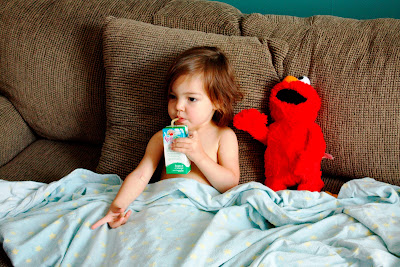 I think she's feeling better though she's obviously very tired and a bit fussy as a result.  She's drinking a lot and eating a little.  We've got a crazy arsenal of medicines the doctor prescribed that I'm trying to stay on top of...

We learned a big lesson out of this incident and now know what to look for in the future to keep this from happening again. There were a lot of little signs, and I noticed those signs, and if I were more of a worrier, I probably would have caught it sooner, but I tend to think that everything is fine, and I just wasn't able to put all the signs together into a complete picture.  Next time I'll know! Apparently some kids are more prone to febrile seizures than others and those that are continue to have them until they're 5 so it'll be something we are on the lookout for in the future.

Apparently there is a slight familial (hereditary) tendency toward febrile seizures.  I never had one, but I did have walking pneumonia when I was 2 and fevers that spiked drastically out of nowhere the way that Hannah's did yesterday.  My brother had fever seizures though and even stopped breathing the first time, just like Hannah did.  The next few times my mom put him in a luke warm tube the second his eyes started to glaze over.  We'll have to ask Grannah if Eric ever had any or if she just gets that very unfortunate trait from her mama.
Posted by terri at 5:13 PM