Hannah's first walk for a cause

After writing about the Walk for Maryland's Children and Family Fair, I decide to register us to walk as Team Banana.  I wasn't sure what to expect, but it sounded fun, was close to home, for a good cause, and free (though I did make a donation). It turned out to be really neat, and even more fun than I expected.  We were a teeny bit late, arriving about 5 minutes after 9:00, but a staff member approached us immediately, grabbed us our shirts and a pinwheel for Hannah, and got us to the starting line before the ribbon was cut.  Incredibly impressive organization!  Here's a super short video (maybe 10 seconds tops) of us starting off:

Oh, I forgot to mention that my mom came down to spend the day with us and take advantage of some girl time while Eric participated in the 9 Hours of Cranky Monkey mountain bike race at Rocky Gap State Park.  Another sidenote: I had no interest in carrying the big camera so rather than take pics, I took several very short videos...Probably should have experimented with the video camera's picture-taking abilities, but I didn't. I do have this one pic that mom took with her phone: 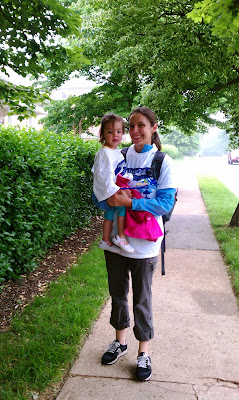 Of course, a t-shirt OVER a raincoat is not the most flattering look....

Anyway, we started out with the group, but within about 5 minutes were so far behind everyone else that if it weren't for the volunteers stationed on every corner, we'd have had no idea where we were going.   If it's not totally obvious how far removed we are from the group on the pic above, here's a video of Grammy and Hannah approaching the finish line with no one else around...

Good thing it wasn't a race!! But even if it were, we had fun and enjoyed our very quite, very un-crowded walk.

After crossing the finish line, we grabbed a bagel and banana and headed to the free family fair.  First stop was a balloon artist who made Hannah an elephant but didn't give it to her until first telling Grammy that balloons were choking hazards and she should make sure Hannah didn't try to eat her elephant.

Alright, that was the last video. I didn't take anymore once we were inside (they moved the festivities inside because of the rain).  There were all kinds of booths set up with all sorts of great free stuff.  Hannah got a couple of books and a really cute stuffed dog that she's been carrying around with her.  We tried out the inflatable obstacle course thing, but it was too big for Hannah and intimidated her, especially after a big kid nearly fell on her, so we just watched the jump rope squad for a while and then headed home to inspect our loot.

After a nice, long nap, we talked Grammy into postponing her trip home and coming with us to REI so I could buy myself a pair of pants that fit because I was tired of constantly having to hike up my drawers.  I didn't realize it, but there's a PetSmart right next door to REI so at Grammy's request, we stopped there first and let Hannah watch the crazy parakeets for a while.  A bored employee noticed us lollygagging around and came over with her keys to open the turtle tank and let Hannah pet a turtle.  Then she picked up a bearded lizard of some sort and let Hannah pet it while it snuggled down into the lady's hand and passed out.  Not a bad impromptu activity!

REI is a fun store with Hannah too because she loves to crawl in and out of the tents and ride the bikes and run in and out of the racks....and in and out of the dressing room while I try desperately to not flash the entire store....I did find a pair of pants...and a skirt (with shorts underneath), so now I have one pair of non-yoga pants that fit and one pair of shorts that fit. Woohoooo!! Three cheers for a mommy who's butt will no longer hang out of her pants every time she squats down to play.  And fingers crossed that I don't go back to my pre-preggo weight when Hannah weans and grow out of my new clothes that I waited SO LONG to buy!
Posted by terri at 2:42 PM