Yesterday was the Mayor's Christmas Parade which, lucky for us, is in Hampden.  Terrill arrived right when Hannah woke up from her nap, and we all bundled up and walked down to The Avenue to check it out.  But beforrrre that and before her nap, I snapped these pics of Hannah trying to cut her own nails.  I love the second one! 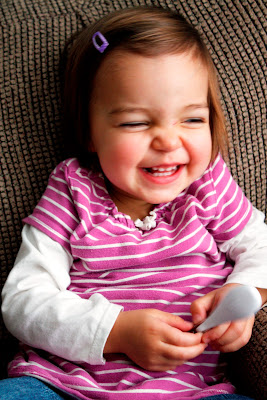 Okay, back to the parade.  Wooohoooo!!! On the way down Elm Street toward The Avenue, a crazy pirate boat float that had already drove the parade route passed us on its way out of Hampden.  When it was out of sight, Hannah looked up at me and Terrill and signed "more."   Lucky for her, more is exactly what we had in mind! 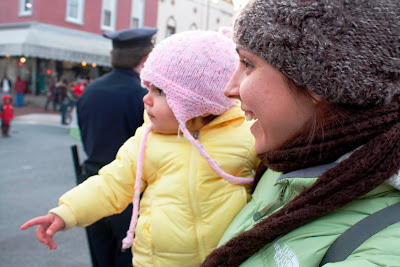 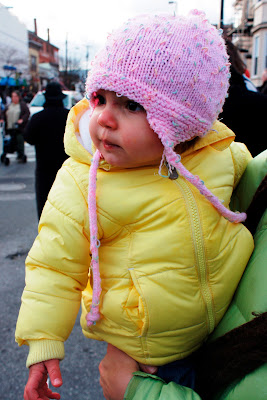 We followed a particularly good marching band up the street and then around the corner to Stacy's house which is on the parade route and where all our friends and neighbors were hanging out.  By this time, Hannah's hands were frighteningly red so we went inside for a while to warm up.  (I ordered her some mittens the other day so hopefully they'll get here soon....)
After the parade, we headed in the direction of home but that meant passing one of Hannah's favorite playgrounds so we stopped for a quick slide. 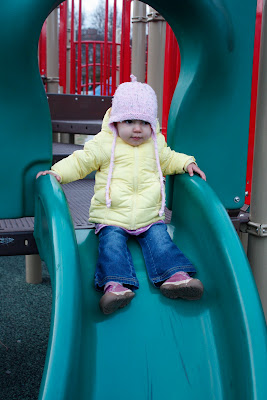 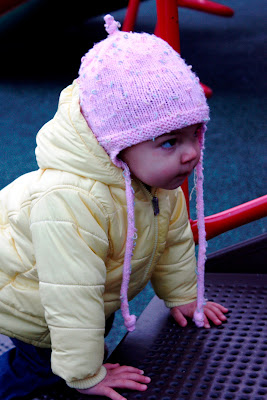 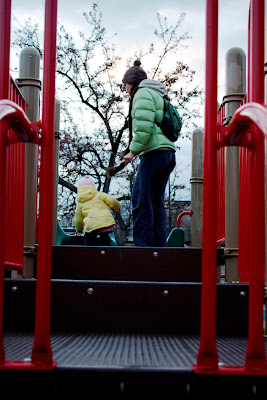 Once home I talked Terrill into staying and ordering sushi with me. Lately I've been eager to introduce Hannah to this most favorite cuisine of mine.  I don't know what the age limits are on eating raw fish, but we ordered all cooked rolls to be on the safe side.  I'm happy to report that Hannah dug right in, destroying an amazing Good Time roll, picking her way through a shrimp tempura roll (the shrimp was kind of hard for her to chew), and even eating some seaweed salad!  She was really into the chopsticks and ate anything I picked up with them--a good trick to remember in the future.

The day got off to a rocky start with the whole refusal-to-get-dressed fiasco, but it ended up being really great, albeit a bit cold.
Posted by terri at 9:28 PM