A few months ago I snagged a Groupon for half off admittance to Port Discovery. I bought two thinking it'd be a fun family activity (kids under 2 are free) but it expires on the 19th of this month and since Eric isn't around, I figured we better just use it without him.  We invited Shannon and Atticus in his stead and had a ton of fun!!
We stopped off in the arts and crafts room first and helped Hannah make a fall leaf. Unfortunately, I left the leaf there to dry and forgot to grab it on our way out the door. 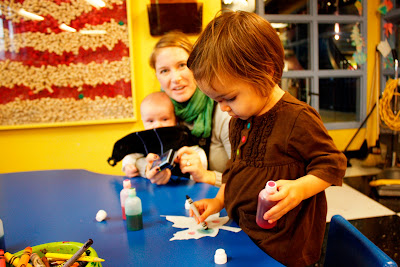 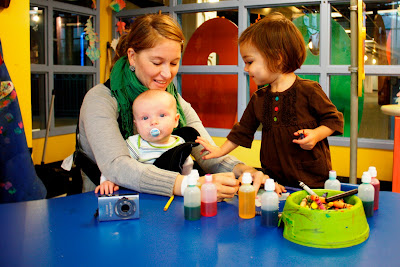 Then we found the MPT music studio where all kinds of musical instruments are strewn about the floor.  Hannah took a liking to the giant drum. Who wouldn't??? That thing was awesome! 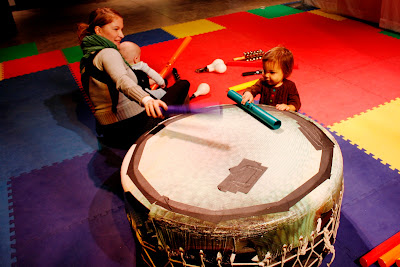 On the third floor, Hannah decided to hop behind the wheel of this construction vehicle thingy (feel free to tell me the precise name of this if you know it) and take it for a little spin.  I love the look on her face and the way she's turning the wheel; I feel like it looks like she's really driving. 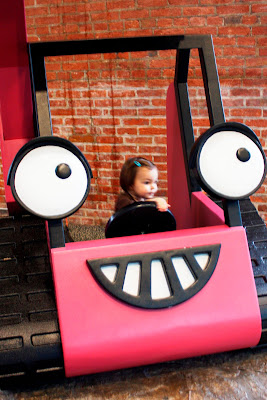 The water world room was next up on our stop.  After putting her in a raincoat, we used the water gun to hit the musical instruments, pretended to be plumbers connecting pipes that were flowing with water, tried to make a giant bubble around ourselves (but failed), and splashed in the giant water bin thing. I should have taken more pictures in this room... 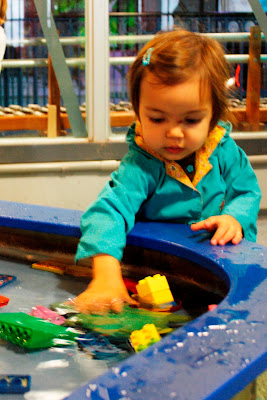 On the other side of the third floor is their Bob the Builder construction zone.  There are a few more construction vehicle thingys to drive, and Hannah test drove them all. 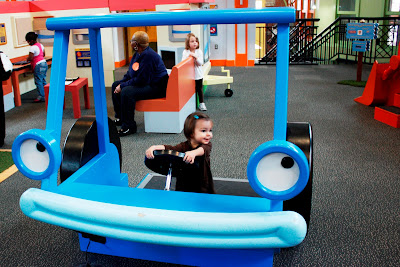 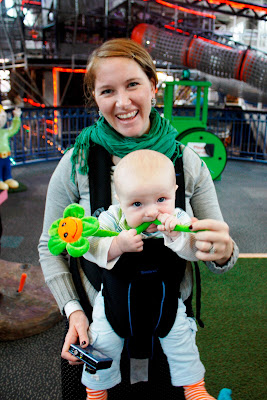 So did Hannah. She pulled them out one by one and handed them all to Shannon, then put them all back. 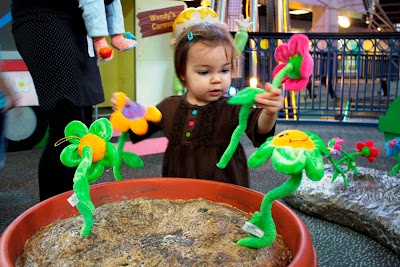 The pretend diner was our last stop on the third floor.  After a small warm-up period, Hannah sat down at the counter and placed an order. 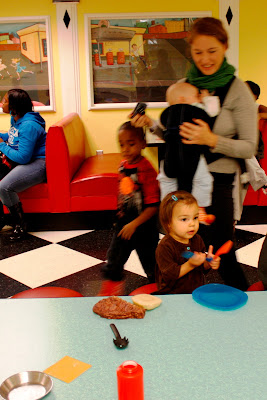 At first she stood around seeming kind of overwhelmed with all the kids running around dishing up fake food and stuff.  (Shortly after we arrived, a bus load of kids showed up.)  I grabbed a stack of plastic cups that nobody was playing with and attempted to hand them to Hannah when this little boy swooped in and tried to grab them. I had a good grip though so I yanked back and told him that I was not giving them to him and to find something else to play with. Some kids are such jerks! When we were in the water world, some of the kids acted like they didn't see her and just bulldozed over her. Luckily I was close enough to catch her each time and at one point, I just picked her up and held her over the pretend dam so she could watch the duck bobbing in the water for as long as she wanted. Those kids tried to shove me out of the way too, but I'm stronger and stood my ground until Hannah was bored and wanted to move on.  Sheesh!!! One of the kids also tried to snatch some Legos she was holding but I was fast and snatched them back.  I know a lot of kids don't have parents who are very hands on, and their lack of manners is not entirely their fault, and I guess it's probably also pretty normal for kids that age to not see or care about babies, to have one track minds, maybe?? I don't know, and honestly, I don't care.  If these parents/teachers/chaperones aren't going to correct these kids' behavior, fine, they can stand by and watch me do it for them.  Hopefully one day Hannah will be able stand up for herself, but in the meantime, I'll do it for her. 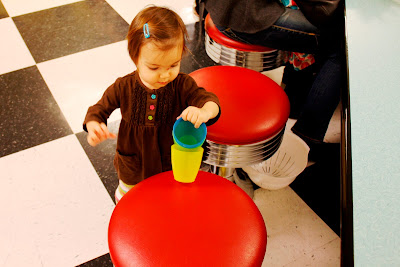 While I'm on that rant, a couple months ago we were sharing the Stadium Playground with the YMCA daycare and had a particularly annoying experience, way worse than the kids yesterday who weren't so much rude as completely oblivious.  We were heading for the slide when one of the little boys ran over and actually blocked us from the slide screaming that Hannah could not go down it.  I looked around for one of the daycare workers, but none were paying attention.  There's another slide about 2 feet away so I figured our next best bet was to just avoid the situation altogether and go down that slide, but this kid dodged in front of us on that one too and blocked the way again!  That's when I put my foot down and told him to move it or lose it.  Ha! I didn't say it like that, promise, but he moved. Well, he moved from the top of the slide. He ran around to the bottom and tried to block us from there. We slid anyway.  Luckily the day care left shortly after that.  I
Whew! Sorry for the rant! On to the cool part: the uhhh...ummmm... I have no idea what it's called, but in the center of Port Discovery is this gigantic contraption made up mostly of nets with tunnels to climb through and ways to climb up and down and all around. It's awesome!!  I thought Hannah would love it even though it's made for older kids, but it kind of intimidated her.  I tried to get her to go down the giant slide in the picture below, but they wouldn't let us ride together and since it's this giant black hole, it scared her to go alone. Some things will have to wait until she's older I guess.
I did get her to walk up this narrow netted walkway and then crawl back down this tunnel.  She really liked that and was having run looking down through the holes at all the people below. 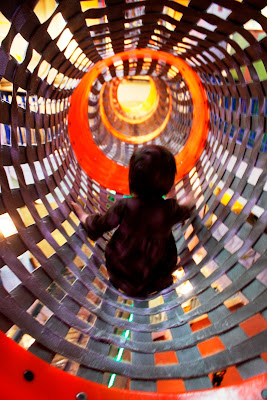 So, Port Discovery is not designed for kids as young as Hannah, but she still had a lot of fun, and I saw signs advertising something called Tot Trails. I guess they're building a toddler friendly part.  I'm going to look into the cost of a family membership here, but I hesitate to get it because the parking is so expensive. It's the same with The Aquarium. You're looking at dropping at least $10 every time you go regardless of a membership.
Speaking of memberships, Groupon had the best deal on Monday!!! It was more than half off a family membership to the zoo!  I bought it immediately. The zoo is minutes from our home, and the parking is free. I've been meaning to buy a membership there anyway. Getting one for $45 instead of $99 is awesome!!!
Posted by terri at 2:07 PM