We hightailed it down to the aquarium first thing yesterday morning to break in the membership that Grannah and Granpah got us for Christmas.  We've been wanting to take Hannah for a few weeks but didn't want to go until we were ready to fork out enough dough to get a membership because tickets are up to almost $30/person but a couples membership is only $109/year--kids under 3 are free--so if you're going to go more than twice as a family, you might as well just buy a membership.  That or ask for one for Christmas.  This is totally my ideal Christmas gift: a whole year of great, family-friendly experiences rather than an object I need to make space for and then dust.

I have to warn you that most of these photos are kind of redundant: "Look! It's the back of Hannah's head looking into a fish tank!" and "Oooo! It's the back of Hannah's and Daddy's head looking into a fish tank."   If you're not a die-hard Hannah fan, you might find yourself fighting off tears of boredom after the second shot. Consider that your disclaimer!

Scuba Steve was feeding lettuce to a giant 3-legged sea turtle when we got there.  That photo is blurry but I snapped this one when he took off with squid in hand to feed the rays. I think that would be an awesome job. Don't you? 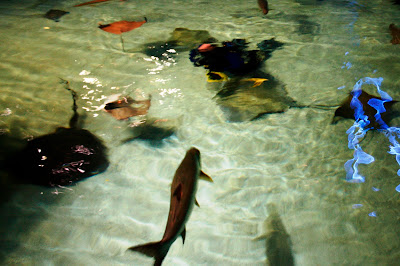 Ever since I was very little and taking field trips to this aquarium, my favorite fish was the cowfish.  He's in the tank pictured below toward the top. He's got a huge head with teeny, tiny fins and these incredibly puckered-up lips.  I just love that guy. 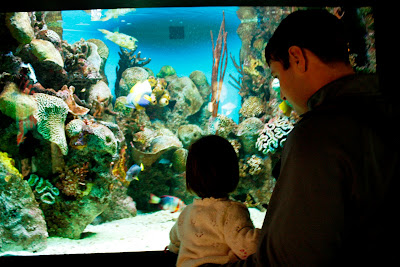 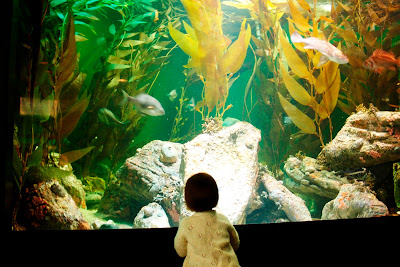 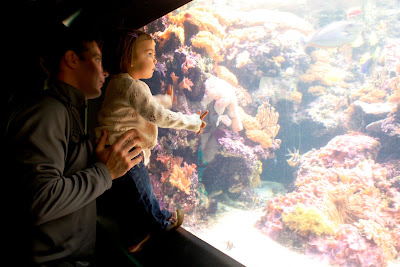 Most of the tanks have ledges for little legs to jump up on for a better view, but this tank was cooler than the others because it started at the ledge. As soon as Hannah discovered the potential of this particular ledge, she started running back and forth, pausing just long enough at each end to get turned back around.  I think the catfish got tired just watching her. 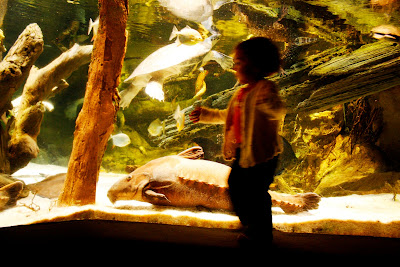 Justin and Joel (yes they were there, but since Hannah stuck with Daddy, they didn't make it into any of the pictures) chose seats like eight rows back for the dolphin show but me and Eric plopped down in the splash zone so that Hannah could be front and center to the action.  I didn't really get too many pics of the dolphins, and nothing I did get is worth posting.  Anyway, as with the other stuff, I've seen my share of dolphin shows--I was even the guest star in a dolphin show when I was like 5--so I was mainly getting a kick out of watching Hannah watch the dolphins.  Kind of like the Hawtch-Hawtcher bee watchers in Dr. Suess's Did I Ever Tell You How Lucky You Are?  Look how cute she is?? She was saying "ball" in this one because the dolphins were tossing around a ball. 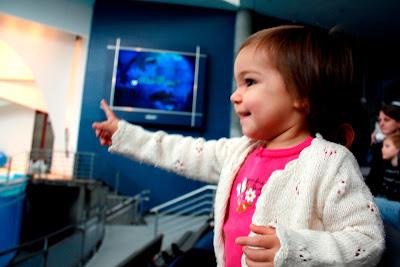 The current traveling exhibit at the aquarium is called Jellyfish Invasion. It's a small exhibit, but I liked it. Joel hated it because he hates jellyfish, and I guess if I were a crazy, hardcore fisherman out in the boondocks of Alaska who was constantly getting them stuck in stuff, I'd probably hate them too, but I'm not, so I think they're pretty cool.  Hannah did too. 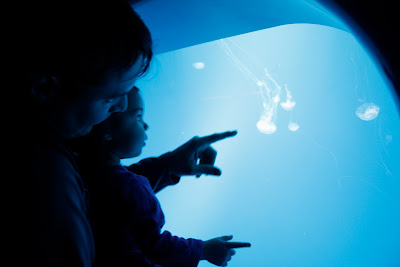 I managed to get a face shot in the elevator.  Look at those dimples coming in!!! 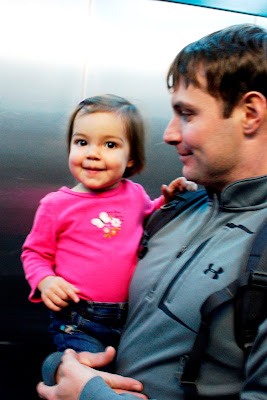 I think this was taken in the rain forest....but it might have been in the Australia section...They're kind of similar to a non-professional like myself. 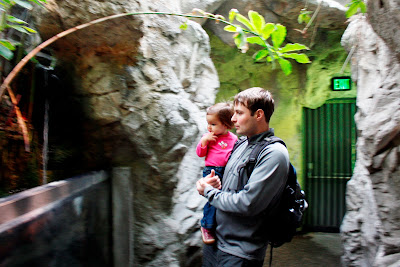 Yeah, it was definitely the rain forest, and so is the next one.  I didn't like any of the shots I took in Australia, probably because it was after noon by then and I was freaking out about how we needed to get Hannah home so we could feed her lunch and get her down for her nap. 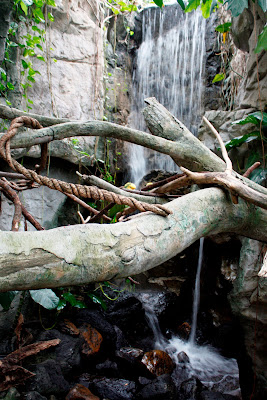 I think we're going to love having this membership, especially while it's so dang cold outside; It's a cool place to unleash Hannah and follow her around pointing out the various fish, turtles, and puffins. And now that the Sunday farmer's market we used to go to is closed for the season, we've got a Sunday morning activity slot to fill.
Posted by terri at 9:30 PM