This has been one h-e-double-hockeysticks of a snowy winter!!  I haven't seen this much snow since I lived at the Roland House right after college...We got a big snow like this one winter and apartment 3b (us gals) and 2b (our guy friends downstairs) got all suited up and trekked down to our favorite watering hole on The Avenue throwing ourselves and each other into snow drifts the whole way there and back.

My how things have changed!!!  The snow started on Friday and was really blizzard-ing it up Friday night--I think we had a thunderstorm or something because I kept hearing crazy banging.  Anyway, just like old times, I ended up being up all night but not because I was out partying.  After 2 nights of sleeping straight through the night from 7:45 p.m. to 6:55 a.m., Hannah decided to pull an all-nighter on Friday. She woke up at 11:45 and stayed awake until at least 3:30.  She wasn't screaming, just intermittently crying/fussing and wide awake ready to build a snowman or something.  I got so desperate that at 2ish I broke down and nursed her even though I haven't nursed her at night in about a month now but even nursing didn't knock her out.  Maybe she thought it was day time because the snow was making it so bright in her room (we've gotta get some curtains in there), or maybe it was the thunderstorm keeping her up.  No clue, but at 3:30, I gave up.  I went to bed and turned the monitor down really low and went to sleep.  I should have done that sooner.  She woke up again at 6:30 and I don't know about you, but 3 hours is NOT enough sleep to make me a functioning rational being. I stumbled around here like a crackhead complete with bad breath and a bad attitude.   I tried to nap when she napped, but she kept taking these 30 minute naps so by the time I was drifting off to slumberland, she was up and crying again.  Finally at about 2:45 I put her in her crib and closed her door, handed the monitor to Eric, turned the fan on high in our room, closed our door, crawled into bed, and pulled the covers up over my head. I slept peacefully till about 4:20.  She woke up around 4:00 so we were both feeling much more sane for what little was left of the day.

After that nap I got stir crazy so we suited up and walked about a block down where we ran into the amazing artist who made our transom sledding down 37th Street with his 4-year-old son and various other neighbors and one foster bull dog.  We hung out with them until Hannah's nose started running and her cheeks got red, then came home for dinner, bath, and bedtime.  Last night was back to normal--she slept straight through from about 7:45 to 7:10.  Whew!!

Picture time! This is the view from our front door.  That's Eric's car covered in snow.  Good thing he doesn't have to work for the next 2 weeks; it'll take that long to dig him out.  He's pretty much the only person who parked on our block.  Since our street is really narrow, they don't plow it, and since we're on a pretty steep hill, it can be a real pain to get out when it snows so everyone else parks at the bottom of the hill in the grocery store parking lot or on Elm. 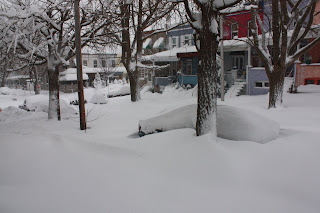 Earlier in the day Eric walked down to The Avenue with the neighbors and took this shot of Cafe Hon. 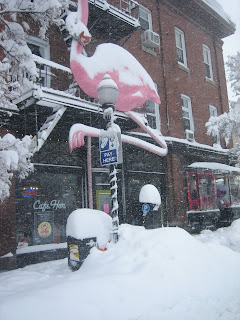 Here's a shot I took of our block from the bottom of the hill last night. 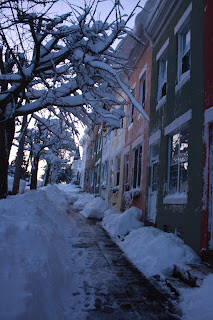 And I realize this is not the best pic of Hannah since it's a dark, but it's the only one I got of Hannah post her first blizzard so it'll have to do. 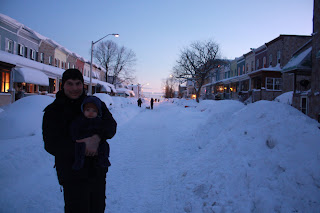