Like I said in a previous post, having to carry around this big baby is prohibiting me from carrying around the big camera, so this summer will go down in history as the least documented summer in Hannah's life. Luckily, technology puts camera phones in the hands of the masses, so moments like the ones below aren't totally lost, they just aren't as preserved quite as nicely as they would be on the other camera.

These pictures span the last month, maybe more. I snap them randomly and then forget about them...I call them the super dad collection.

A few weeks ago Eric took three kids under the age of 5 to the pool and not one of them drowned on his watch. I think this is a pretty amazing feat and worthy of the title "super dad". When I arrived with Jacob, all three kids were hanging off Eric, and he was spinning them around like some sort of Hercules. I kept trying to get a shot of that, but the phone camera stalled and got the after shot when all three were already back in the water. 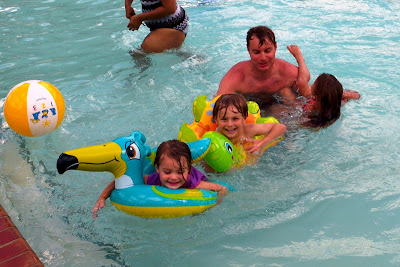 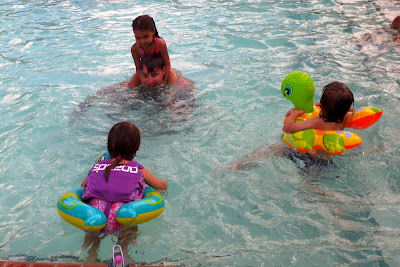 Last week at the farmer's market Eric filled his backpack with veggies and a melon, filled two grocery bags with more veggies, and then hoisted a 36-pound human and her smoothie onto his shoulders.  I believe this is the pictorial definition of a pack mule. (And no, I wasn't just skipping along while Eric carried everything; I carried Jacob, which at 16 pounds, is no small task in itself.) 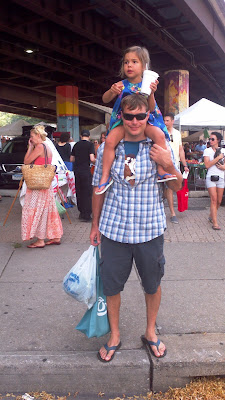 This summer has been packed full of quality daddy daughter time, most of which is going unrecorded. Hopefully her memory is in full working order!
Posted by terri at 9:43 PM