The overwhelming urge to blog kicked in on Friday but there was NO TIME and then Autumn was in town on Saturday so we socialized during nap time and then I thought for sure I'd get around to posting yesterday, but nope. Hannah's first nap was super short and then I was so tired from the night before that I napped during her second nap. So today I got up early with Eric which gave me an extra hour of work so that I've already finished 4 hours today and Hannah is still asleep (though probably not for long) so here goes!

One new and cool update:  last week....maybe Wednesday but I can't remember....I went to the gym and when I came home, Eric had another fun Hannah story for me.  When she takes cat naps, we leave her in her crib until she's been in there for at least an hour so if she lays down at 9:00, she has to stay in her crib till 10:00 even if she wakes up at 9:30.  This particular day, she woke up at 9:30.  Eric randomly checked on her in the video monitor until one check revealed her sitting up. She had managed to reach the top of the crib and use her future climber muscles to pull herself up to a sitting position!  The gal is STRONG!!  At the time of sighting, she was attempting to pull herself even higher to standing so Eric flew up the stairs to put a halt to her acrobatics.  It looks like it's time to lower the crib mattress down...In the meantime, I'm watching the video monitor like a hawk when she wakes up early in an effort to prevent her from diving over the side.

No other new developments but she enjoyed a very social weekend.  She likes high-energy people and situations so she liked having Autumn around and was even more entranced when Tasha and Matt showed up and the six of us really got going. 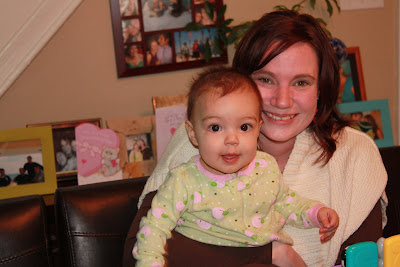 Later that afternoon, my mom drove down to babysit so Eric and I could join Autumn for her "Dirty 30" birthday dinner at Tio Pepe's.  This is the third time Eric and I have gone out since Hannah was born, so it took me a loooooooong time to get ready. I forgot how to wield a hairdryer and brush simultaneously and ended up with a sore arm from trying to have non-mommy hair.  Make-up is always questionable--yes, I want to look a little snazzy but no I don't want to have to scrub my face later.  Catch 22. I opted for light eyeshadow and a smidge of mascara.  Then came the wardrobe....Trying to get dressed in the winter has ALWAYS been a problem for me. I hate everything about winter not the least of which is getting dressed.  I'm not a fan of most sweaters and since I try not to rock the UGGs when going to fine dining establishments and since the only other shoes I have are ballet flats, that means my arms and ankles were cold.  Sigh.  After the stress of getting ready we had a ton of fun.  I was supposed to leave the restaurant by 6:15 to come home and bathe and nurse Hannah for bed but we totally lost track of time. I looked at my cell phone when the waiter brought our meals and realized it was 6:25 so I left my steaming plate of paella on the table and flew out the door, speed racing all the way home.  Eric had my food boxed up and took a cab home shortly after.  Mom had bathed Hannah just fine but was running out of ways to keep the sleepy little girl happy so I showed up just before what probably would have been a meltdown. Whew!!

Here's Hannah playing with Grammy as we were racing out the door, late for dinner because of me.  My brother's wife's parents bought Hannah this toy for Christmas (very sweet and unexpected!).  Hannah can't work the various toggles that open each thingy yet, but she loves to close them. 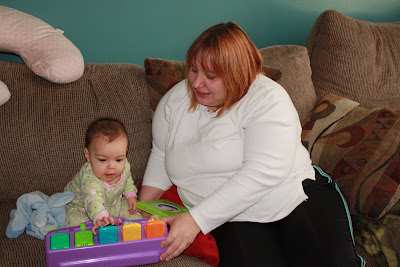 Hannah was finished nursing and in bed asleep by 7:30 which is right about when Eric walked in the door with my food. I was starving by this point and scarfed it down but not before ditching the cute short-sleeve shirt for a sweater and trading my ballet flats for my UGGs.  After making sure mom was good to go, we headed back out to the Rainbow Music Studios for some karaoke.  Eric and I were the first to show up so we were belting out some Mariah Carey when everyone else walked in.  I love that place!! I think I want my birthday party there. It's just so fun to have a room just for you and your friends to sing karaoke and be crazy.  I was ready to go by about 10:00 and since earlier that evening I'd given Eric the green light to stay out without me being mad, I left alone.  If mom didn't want to drive back to Hagerstown that night, I might have stayed out till 11:00, but there was no way I'd be out any later than that.  It's just not worth it. I love my friends and I had more fun that I've had in a LONG time, but I'm glad I left when I did because Hannah woke up at 5:45 on Sunday. I left her in there till 7:00, but didn't get much sleep in between, hence the nap yesterday afternoon.

I've been trying to get video of her doing the table rock (called that in the Itsy Bitsy Yoga book because she is in table pose rocking) but have been unsuccessful so far.  Eric took this one on Saturday and the first couple seconds are her table rocking, but she drops almost immediately and then just makes cute noises.