Hannah's first visit to the symphony!


We skipped our regular Friday morning swim this week and went to the Meyerhoff instead to see the Baltimore Symphony Orchestra perform Prokofiev alongside a Cinderella puppet show. They have four family concerts each season performed on a Saturday morning every other month (next up in February is LIFE: A Journey Through Time).  They take each of these family concerts and break it down even farther to tailor it to specific age groups which they perform on the Wednesday and Friday before the Saturday concert. Tiny Tots is the shortest program at 35 minutes and is tailored to kids in pre-k and kindergarten; Hannah might be a bit young by their standards, but I figured if she can sit through an hour of Dora, she'd last at the symphony for 35 minutes.

I was right. She sat, riveted, on the edge of her seat throughout the whole show. It probably helps that we pulled a Cinderella book out of a hand-me-down bag a couple months ago, and it's quickly become one of her favorite books (though not mine since it's the Disney version based on the movie and therefore poorly written).  She also has a book out of the library right now called Musical Max, and at the end, Max becomes the conductor of an orchestra.

We got lucky too: we spotted two of Hannah's neighborhood pals as soon as we walked in, Julia and Sophia, so we had company.  After the show I snapped a pic of the girls looking quite mature and cultured in their theater seats. 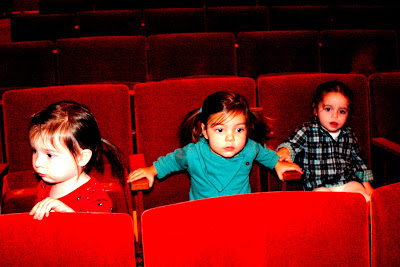 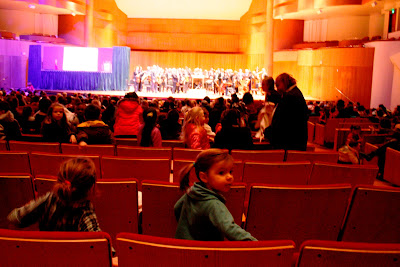 I really wanted some sort of monumental first-time-at-the-symphony pic, but the place was a certified madhouse with school groups swarming everywhere, and I wasn't sure what the most monumental backdrop would be anyway since I couldn't very well put her in front of the building and then stand back far enough for anyone to be able to tell what the building is and still recognize Hannah as anything more than a speck.  I ended up sneaking us back into the lobby after the show (they diverted us out the back door) and just taking a pic in front of the their holiday decorations.  It's not really the backdrop I was hoping for, but it's better than nothing.  Quite serious looking isn't she?