We got festive this weekend and set up our tree. I got home from acupuncture in time to help put the ornaments on the tree (meaning I missed the whole part where you dig out the tree and accessories and piece it together--shucks) and take a picture of Hannah topping it off with a star. 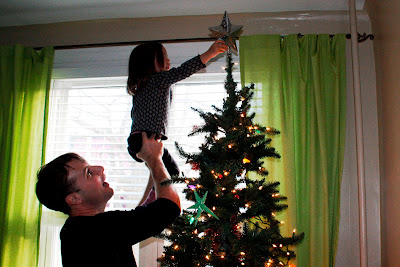 On Sunday we donned our ugly sweaters (ugly dress in Hannah's case--thank you Shannon for that sweet thrift store find!) and walked down the street to the annual Mayor's Christmas Parade. 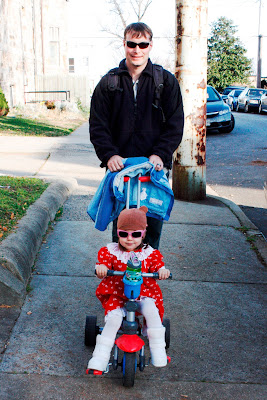 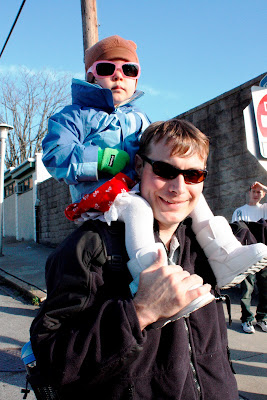 We met Atticus (and his parents) at the corner of our street and Falls and then walked the parade route up to Brody's and Addison's (and parents') ugly sweater party. 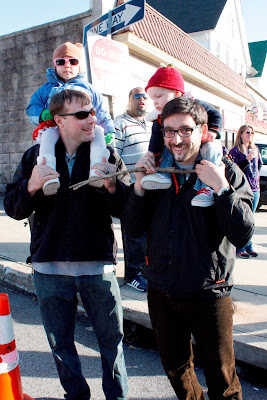 Hannah loved waving at all the Miss this and Miss that who ride around perched on the back of convertibles, and she was also pretty into the giant snowman balloon. 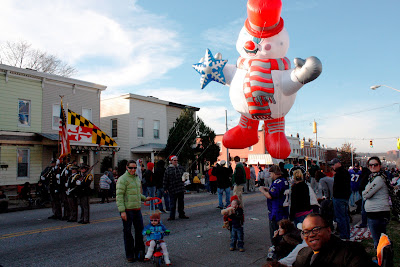 We kept our coats zipped up pretty tight the whole way to Erin's and Ryan's, but unzipped them with pride when we found ourselves among friendly faces and fellow ugly sweater wearers. 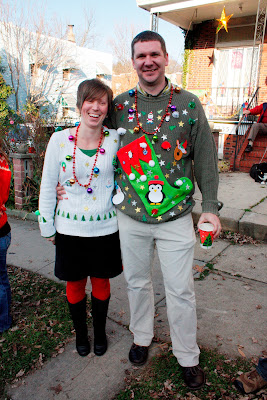 Brody was pretty psyched to see "Baby Hannah" as he referred to her, but I didn't manage to get any pics of them playing together. Addison totally grew up in the few months since we'd seen her last so her and Hannah (only 4ish months apart) hung out more than they previously did. 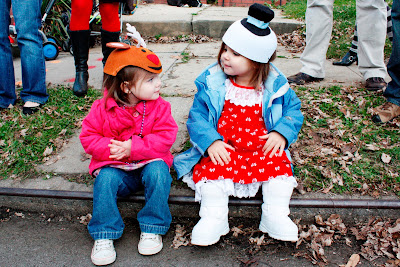 Hannah loved the snowman hat that Jessica gave her but was not a fan of having that strap tucked under her chin.  She found it more comfortable when worn across her forehead. 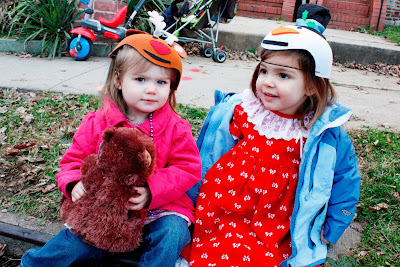 Is it me or is there something strangely super hot about ugly sweaters?? No? Just me?? I love these ladies!!! 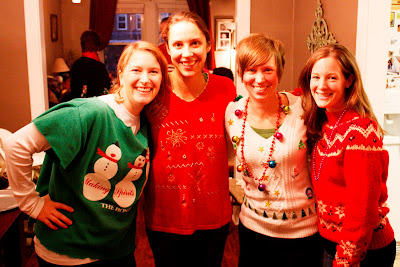 Of course a family shot of us decked out in ugly holiday clothing was imperative. Eric really did well with his. It's this sweatshirt with a snowy winter scene and a bunch of black streaks all over it. Random and weird.  Hannah loved her dress; I don't think she got that wearing it was a joke, but that's okay. She will someday. 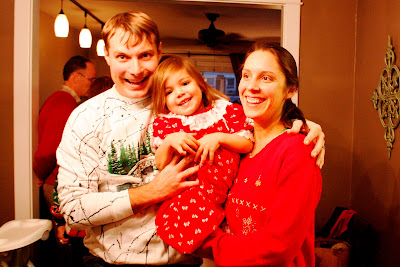 I'm bummed because I didn't get to see any of the awesome dancing groups that I saw last year. After we went inside to pee, we didn't make it back out again. Hannah went down to the basement and spied Brody's train table ("He's so lucky!" she said), and getting her out of the house after that proved impossible. Fortunately, she was so thrilled with the train that she didn't require attention so even though I missed the rest of the parade, I got some much-needed QT with good friends, and it wasn't long before Hannah was joined by her friends and got a little QT of her own.

I guess we're officially into the holiday season now, which is fun in some ways and not fun in others. I'm trying to just focus on the fun and discard the parts I don't like.  Each year, that gets a little easier...
Posted by terri at 8:13 PM