In spite of Christmas still being a few days away, Hannah has already done quite a bit of present opening starting the second weekend in December when we brought up the kitchen (still in the box) that Grammy had brought with her over Thanksgiving and asked Eric to hide and put together sometime before our early Christmas celebration.  We changed our minds last minute though and decided that we didn't want to host and would be driving to Hagerstown instead to let Chip do the honor. Mom requested we give Hannah her present early so that all the pots and pans and plastic food that Chip and Erica and Mom got her would make sense. I took a video of Hannah being presented with her gift, prior to Eric putting it together, and another of her playing with the finished product with Amy, but while Eric was putting it together, Hannah decided she didn't want to wear pants, and I wasn't paying attention to the pantslessness when I took that second video, so it became unshareable--which is a total bummer because it's super cute. Unfortunately, I didn't realize she was pantsless until after I uploaded it to YouTube (because it's the first thing my mom noticed and pointed out), and I can't figure out how to delete a video from there, but I did find a new editing program and one of the pre-set options is to to turn your video into a cartoon. I don't like how it looks, but it does make it so you can't see the pantslessness which means it is now shareable.  Second, unfortunately: YouTube is taking forever to make the changes so I can't share the link yet.

Hannah played with her kitchen all week, putting her breakfast in the oven instead of eating it and stealing carrots while I was mid-chop and stashing them in the microwave. Every morning when she came downstairs she said, "Mom, I have kitchen!"

On Saturday we drove to Chip's for our early Christmas celebration. We got Clay a little Thomas the Train plow thingy, some extension tracks for his train set, and a book. Us "grown ups" spent most of the day tinkering with the train track, trying to create the most awesomest track and use every single piece. 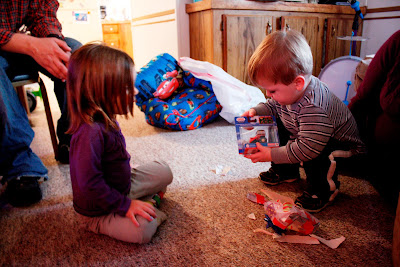 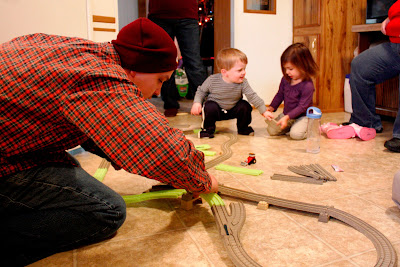 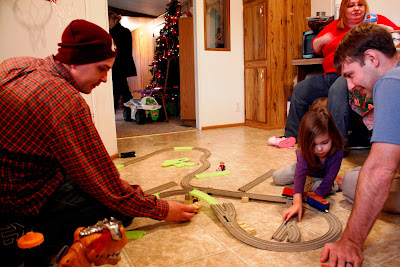 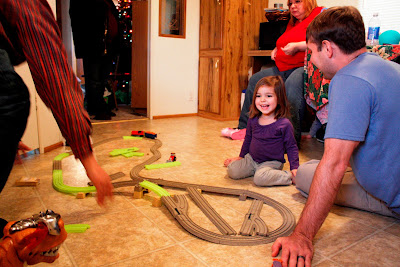 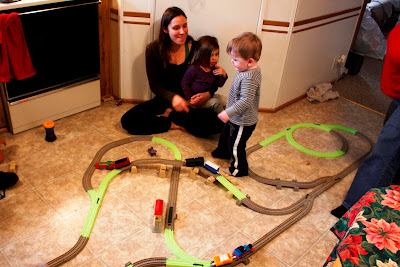 Hannah couldn't play with her presents because it was a bunch of small pieces that we didn't want to lose so in addition to using the train set as a distraction, we played with this crazy dinosaur that roars and shoots darts. Grammy got it for Clay. It didn't work as a great distraction though because it freaked out Hannah. She kept her distance. She likes dinosaurs, but not mean ones, and this one has teeth and moves on its own. 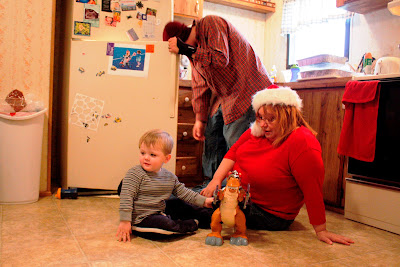 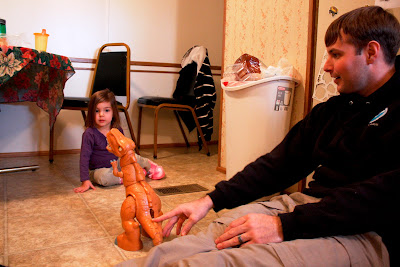 All that play time made us tired so we curled up in Clay's little bed and pretended to sleep. 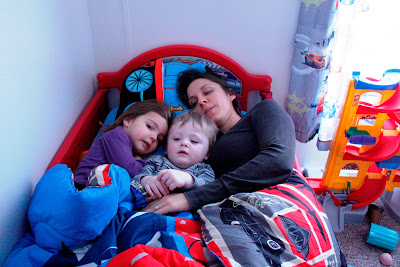 Then it was back to the train! This last track we made was definitely the awesomest. 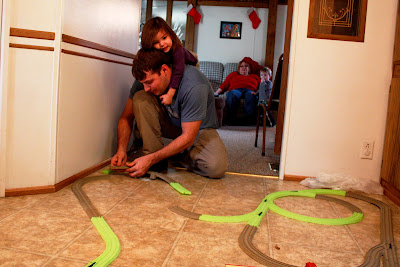 It was freezing outside that day, but we ventured out for a short burst of fresh air anyway. 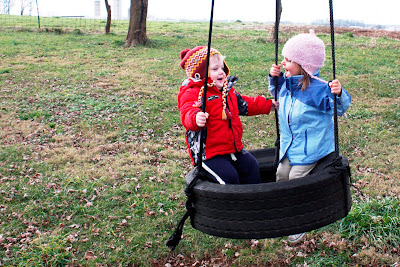 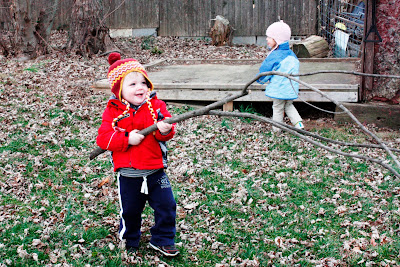 It was a really nice, relaxing day, and although we love hosting, we really loved being able to just play and lay on the couch until the food was ready and then lay on the couch some more afterwards.  So far, this holiday is shaping up to be pretty laid back which is right up my alley!
Posted by terri at 9:36 PM