Hannah started her turkey day by racing down to the basement to wake up Grammy and her little teacup chihuahua, Winnie. While Eric and I made blueberry pancakes, Hannah and Grammy camped out on the couch watching the Macy's Day Parade--a favorite past-time of my mom's.  After watching a few of the numbers from various Broadway shows, Hannah ran upstairs to get a costume of her own that, in my overly bias opinion, rivals the best of Broadway's dressers. Check it out: sleep sack, butterfly wings headband (plus flower headband around neck and rabbit ears headband in arms), two purses, keys, backpack, and sunglasses around the neck.  Watch out Broadway!!! 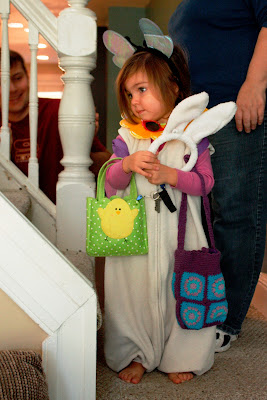 Clay came then and the two spent the rest of the morning running around after each other while Eric and I made turkey and all the accouterments.  I tried to get a pic of the kiddos with their little Thanksgiving plates, but by the time I had the camera, Clay had pushed his plate aside. Within seconds of taking this picture, he had stood up, turned around, and was jumping up and down. Hannah chowed down on some turkey but was otherwise unimpressed with the food as well.  They weren't even interested in the pumpkin pie! Crazy, right? 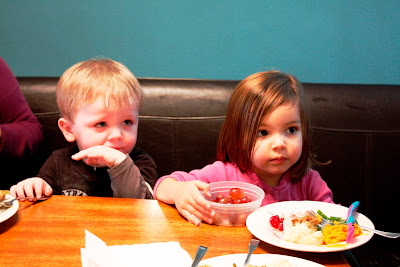 Shortly after dinner Clay crashed on the couch with his mommy. 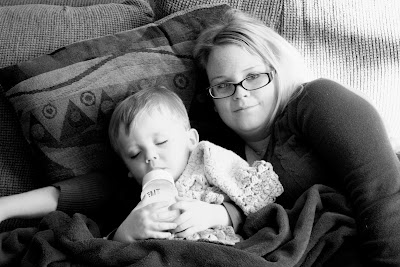 Then his daddy flopped over and passed out with the rest of his family.  The rest of us watched two episodes of Olivia, one of Hannah's favorite shows and one that I actually don't mind watching with her. Olivia reminds me of future-Hannah sometimes, all eccentric and spirited. 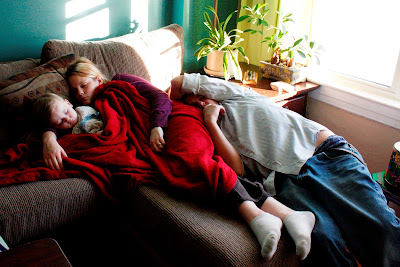 After an hour of resting, we trekked down to the playground to get a little fresh air and enjoy this amazingly warm weather. 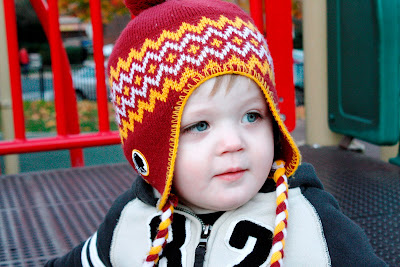 Hannah and Clay took turns pushing each other on the bike. 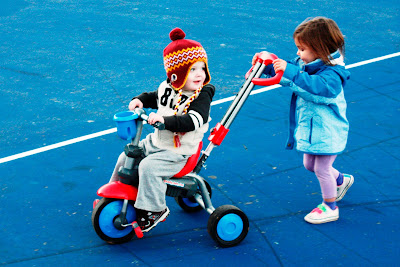 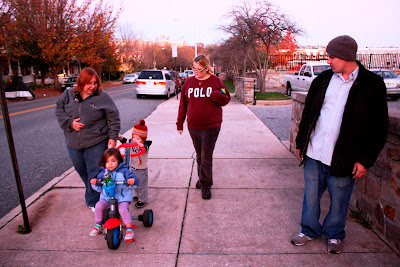 Chip and Erica went home then, but Clay stayed over with Grammy. Hannah's first sleepover!!! We put the crib mattress on the floor in the guest bedroom for him and aside from rolling it off it a few times, he slept great all through the night.  Both kiddos woke up around 7:00 and sat down to breakfast in their pjs. 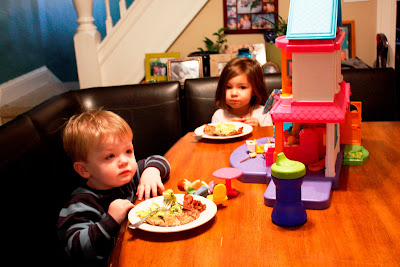 After breakfast we took the kiddos to the pool at the gym. I left the camera in the locker for obvious reasons, but took the video camera and put my mom in charge since she doesn't have a bathing suit and had to sit on the sidelines anyway. Leaving my mom in charge of getting video proved to be a colossal mistake. No offense, mom, but Hannah could have taken better video. There are 11 videos, 8 of which are completely unwatchable. The picture actually goes in circles from my mom's thigh, to the wall, to the ceiling, before settling back on her thigh.  Seriously mom??? My guess is that she'll blame this on the fact that she didn't have her glasses, which I'd buy if the video at least held relatively steady, but when I say that it moved in circles, I am not exaggerating.  I got sick watching them.  So here are the least offensive:

The first is of Hannah jumping off of Eric's shoulders.  Like my mom says at the end, she cut Hannah's head off. That's okay though--she held the camera steady with no ceiling shots. (For some reason the embed code is not turning into a video so I'm going to link the text and you can just follow it to YouTube if you want to watch it.)

This one is just miscellaneous swimming footage worthy of posting only because it, like the one above, does not include a ceiling shot.  A couple weeks ago we picked up a little Speedo swimming vest at the consignment shop for $5, and Hannah is loving it.  She takes off across the pool now with no problems and constantly tells me to "wait here" while she sets off after her ball or some other toy.

I took the last video since I had a better angle being in the water.

Although swimming wore the kids out, we pushed 'em a bit more and walked them over to the aquarium for lunch and fish-watching. 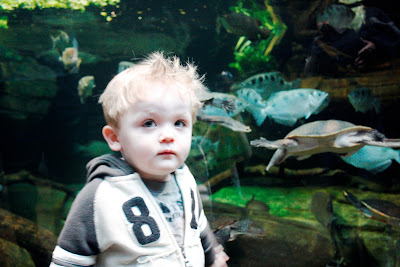 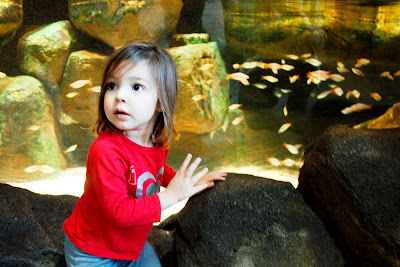 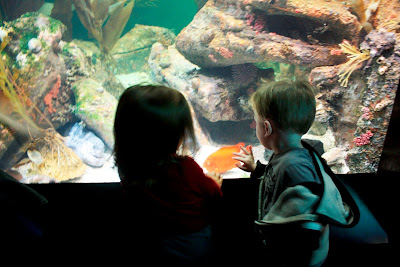 Clay pooped during the dolphin show so Eric took him out to change him (except we didn't have another diaper so he didn't actually change him so much as just remove the poopy diaper and cross his fingers that Clay didn't pee until we got back home--and he didn't). When we came out of the dolphin show, Clay was passed out in Eric's lap. Those two really bonded, and it was super cute. It's also super amazing to see a kid pass out like that in the middle of everything. Hannah was exhausted too, but not enough to let herself go to sleep. Even after a day that busy, she was laying in bed that night saying "I not tired!! I not tired!!" In between yells, she rubbed her eyes and yawned emphatically. 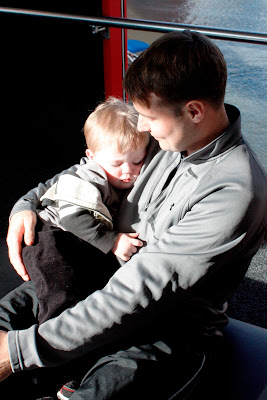 Eric, with Clay asleep in his arms, high-tailed it to the car to get Clay wrapped in a pee pad and buckled into a car seat. Hannah and I lagged behind considerably because Hannah felt the need to stop and hug every tree. I gotta admit, I love that she was hugging trees. 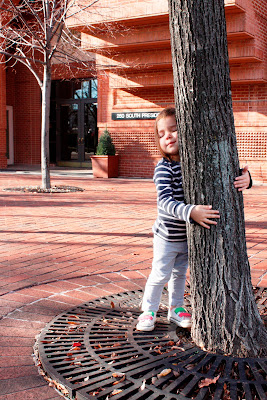 We spent the rest of the weekend recovering from all that awesomeness and excitement. I hope everyone else had a great turkey day too!
Posted by terri at 9:15 PM