Porch Poop and Other Small Stories

I'm getting behind on blogging and since I just took a bunch of pics today at Libby's and will probably take a bunch more tomorrow at the State Fair, I figure I better post what I've got.  Fortunately, I haven't done a whole lot of photo snapping lately so there's not much to post, but here's our life in the last two weeks:

Shannon and Atticus walked over week before last.  Hannah likes the baby but also likes to be held by whoever is holding the baby...Shannon was talking to baby Atticus while eating her lunch and Hannah was there and maneuvered under Shannon's arm and onto her lap in no time. Later Eric held Atticus which was not at all okay with Hannah.  When I held him, she insisted on being close, but otherwise wasn't too bothered, but when Eric held him, all hell broke lose.  Hannah was fussing and whining and trying to climb up into his arms.  She spent the next two days not letting him out of her sight.  I think having a little brother or sister is going to be good for her...but not easy. 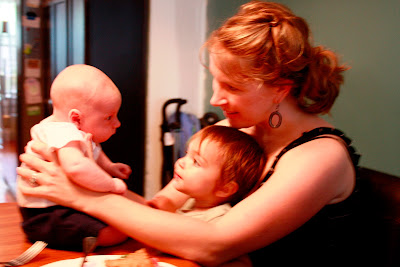 Last Saturday we headed downtown to Mary's. Jen and Bland were in town with new baby Jake who I was desperate to meet.  He's so big compared to the girls!! Hannah is pretty petite and Adelaide is super petite, but Jake is an incredibly cute, incredibly huge little 2-month-old!!  I ended up doing a lot more talking than picture-taking, but I managed to get a cute pic of Adelaide: 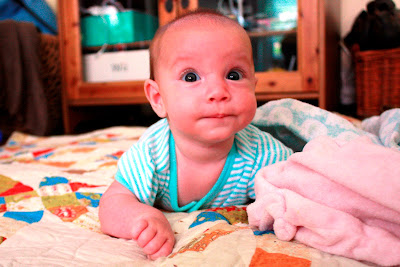 And one of Jake too: 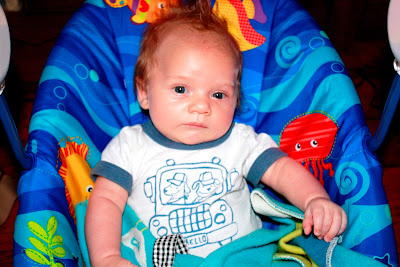 In food news, here's what dinner time looks like at our house these days: 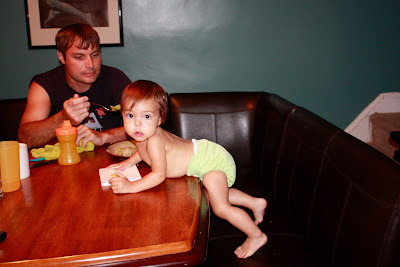 Eric decided that it was no longer okay for Hannah to stand up in her high chair so he strapped her in one night. She screamed an alley cat in heat the whole time we were eating.  Since she screamed the whole time, she ate nothing. Least enjoyable dinner ever.  I spent that evening stressing about the next day and wondering how many days of strapping her in it would take before she got used to it and went back to eating rather than screaming. Then I had a eureka: the booster seat we bought to take to Chincoteague. The few times we'd used it, we'd strapped her in. I set it up at one of the chairs, and we've been using it ever since. She can only sit still for so long though before she's waving her arms in the air (our sign for "all done!"--and yes, that's her first sign!).  At that point, we unstrap her and let her run around the booth part of the dining room table for the rest of dinner. She usually continues to pick at her food, and also ours.  You could argue that I should force her to learn to sit still for the duration of a meal, but I'd argue back that it just isn't a priority to us.  Hannah has a very energetic temperament and has a terrible time sitting still. As long as we start off in the booster seat and keep working on it, I think she'll be fine. I don't see her being 15 and running laps around the dinner table while eating, but if she does end up doing that, we'll deal.  There are much bigger battles to push for--like a healthy amount of sleep.
Speaking of sleep, she's slept for 12 hours the past 2 nights!  Not straight through, but without too much fuss. The first night she woke up around 5:45 but went back to sleep within minutes, and last night she woke up twice, but also not for long either time.  As long as she's doing 12 hours at night, I'm comfortable getting rid of her morning nap. I read that babies her age need about 14 hours of sleep in a 24-hour period.  If I can get her to take a 2-hour afternoon nap (sometimes she does), then buh-bye morning nap!
In less happy news, Hannah has her first real diaper rash, and it is BAD.  Luckily we were at Libby's today and as I suspected,  my childbirth guru had the answer: teething.  Apparently it's something to do with the acidity of the saliva that they produce while teething that comes out in their pee and poo and irritates their little rumpas.  I was worried that it was some kind of a reaction to the vaccines. You'd think the pediatrician could have told me that when I called in (yes, it's THAT bad that I called the pediatrician--this was the first time ever that I've used the pediatrician call service).  The pediatrician said to not use wipes because they would irritate it more. I had actually already stopped because wiping her made her scream these cringe and pull away and scream these terrible "that-hurts-mommy!" screams that made me feel terrible. Yesterday when she pooped I just dumped her in the tub. I thought a mid-day bubble bath would be a nice way to calm her down.  This was not the case.  She started to sit down but screamed when the bubbles hit her butt and stood back up fast, refusing to sit down again. Note to self: bubble baths are not fun for babies with raw butts.  In the future, I'll just use a warm cloth to wipe her. I had originally wanted to use reusable wipes/cloths anyway so I guess here's a good excuse give it a go.  Other than that, the only other professional advice was to let her run around without a diaper whenever possible and to gob on the diaper rash cream.  (The pediatrician recommended Desitin of course, but I'm going to compare the active ingredients of that with some of the brands I use.)  Since we spent a lot of time outdoors today, we let her run around without a diaper most of the day (as a result she took a big dump on Libby's porch...ewwwww!).
Posted by terri at 8:47 PM