I've got all kinds of wordy posts brewing in my head about how insane life with Hannah has been this past week, how she's reverted to screaming instead of sleeping, how her behavior is all of a sudden a lot more to reckon with (she's actually tried to bite me a couple of times when I've pulled her away from something or taken something from her), and how LOUD she is now capable of screaming. It has not been pretty.  I maxed out on patience yesterday morning during nap time, kirked out, and then went to bed and pulled the covers over my head to block out the screaming (Eric's still off work so manned the baby monitor).  I woke up feeling much better after a good nap (apparently Hannah fell asleep not too long after me and also felt better after her nap) and have been better since.  Anyway, I've been wanting to do a little public ranting and raving but wanted to get all my photo dumps out of the way first so I can cross them off my to do list.  That said, here's my second (and final) photo dump of the week.

Last Saturday was my family reunion which we had at Greenbrier State Park this year. I thought it'd be fun for us to have access to the lake but all that did was spread us out so that I ended up feeling like I didn't get as much QT as I'd have liked.

As for the photos....well, as it turns out, I'm a lot more mamarazzi than I realized because the only pics I did get pretty much revolve around Hannah....SO, yeah. Obsessed much?  Anyway, in the future, I will try to remember that other people do exist and that someday, I would like to look at pictures of those other people in addition to pictures of my daughter.

About 10 minutes after we arrived my mom excitedly pulled out Hannah's birthday present and helped her rip the wrapping paper off of it.  Before the paper was off, my brother was there with his present, which stole the show.  Him and Erica bought her a Ride-On car thing (similar to this one

, but it's not Mater, it's just the main character from The Cars) that she can sit on and push with her feet or stand behind and push along. This was a BIG HIT and temporarily overshadowed all other presents.  It's still one of her favorites, but in the week since then she has spent considerable time swinging the mooing and neighing barns doors on the Fisher-Price Little People Animal Sounds

Farm that my mom bought her, snuggling the Raggedy Ann doll from my Aunt Pam and Uncle Donny, and tearing apart anything I try to build with the giant Lego-lookalike blocks

from my Aunt Debby and Uncle Wes.  She also put some money in her piggy bank from my Adam and Jennifer (my cousins) and is looking forward to using a Target gift card from my Uncle Bob and Susan on some new PJs!!  Yes, PJs, I think the kid has PLENTY of toys at this point, but she put her toe through a pair of PJs while in Michigan, doesn't have that many to begin with, and is growing out of what she does have.

Like I said, I didn't get very many good pics, and almost all center around Hannah, but here's the day as viewed through the eyes of a mamarazzi:
I'm bummed because we didn't manage to get a family photo this year. I even brought my tripod to make taking it easier, but Adam and his fam had to leave mid afternoon to take care of their dog and since Chip and Erica were out on the paddle boats when they left, we couldn't just hurry up and take it.  I'm bummed that Hannah and Clay won't have a family pic for their first reunion, but lesson learned for next year: take the photo first!!  In the meantime, this is the closest thing to a group shot that I have on my camera.  Eric jumped up on the bench as soon as everyone started eating and got a very flattering shot of us all with our mouths full. 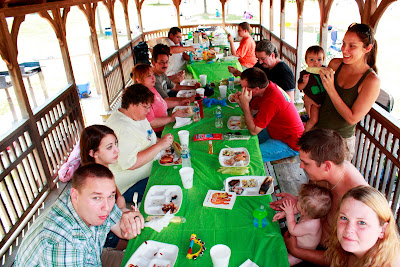 In the two days between Michigan and the family reunion I did manage to do some research on healthy carrot cake recipes and then use those to mix and match ingredients and create my own recipe.  I used spelt flour instead of white or wheat mostly just to add some diversity in the grains that Hannah eats (she's not allergic to wheat or anything).  Then I replaced the 1-1/2 cups of sugar that ALL of the recipes called for with less than 1 cup of brown rice syrup and 2 tablespoons of honey.  I also used a combination of coconut oil and and a pureed apple instead of using regular oil.  To top them, I made a cream cheese icing that just had cream cheese, vanilla, and butter for Hannah and Clay.  I added some confectioners sugar to the rest for the adults.  Really, they turned out about as healthy as the muffins I make. At some point I would like to experiment with less and less sweetener; I'm not sure where the line is between savory and sweet, but I want to find it and then be just barely on the sweet side.
All that to introduce a couple pics of Hannah housing her first cupcake.... 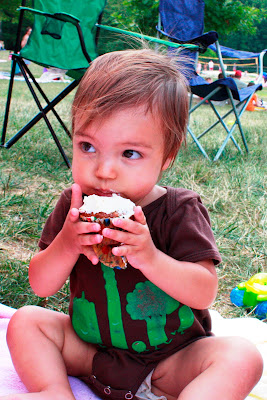 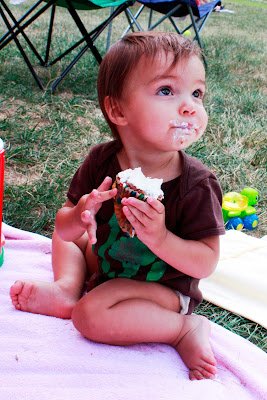 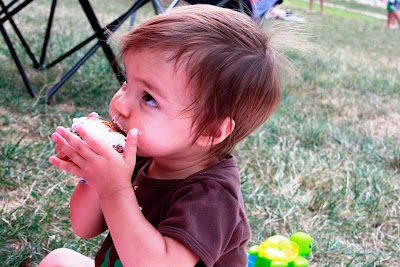 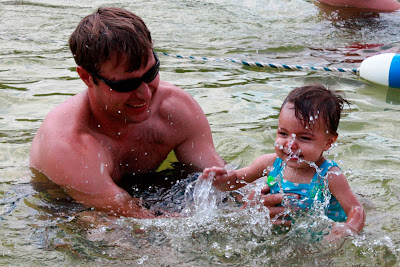 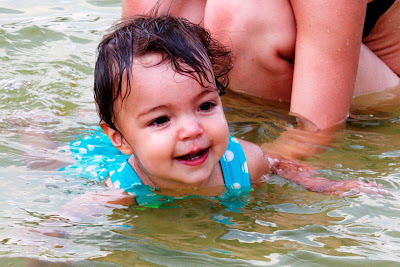 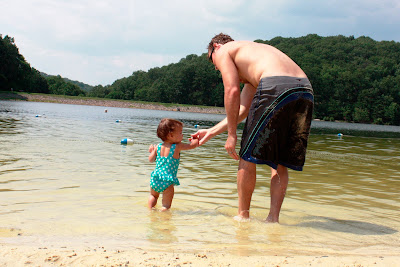 Alright, photo dumps are over. I don't expect the rest of the summer to be so full of mamarazzi moments so get your reading glasses out and get ready for some lengthy, moaning and groaning posts. In the meantime, I broke out the Sleep Lady book again; time to read about 12-month-olds and try to get us back on track!
Posted by terri at 9:54 PM