Oh, I am sooooo behind on posting pictures. Last weekend was super fun and there's tons to share, BUT FIRST, I need to recognize and then part with a phase that Jacob is growing out of (and yes, his name is still Jacob, more on that below).

That early baby business of sleeping anywhere and on anyone is slowly slipping away. In the early days, when the only place he would sleep was my chest, I'd wait until he was passed out and then pull my computer onto my lap, reaching around him to type in an effort to get some work done. This is my lap: 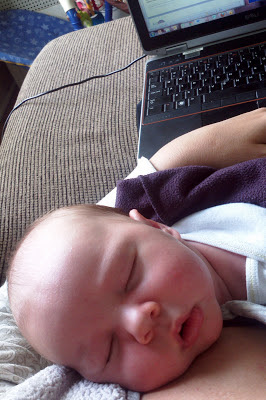 Sometimes when he was really fussy and my arms were really sore, I donned the Ergo and bopped him around the house until he slept peacefully, and then I sat down to work. Part-time employees don't get maternity leave, so if I don't work, I don't get paid, and while I wasn't taking on any big projects or editing jobs in that first month, it was nice to be able to sit down for an hour or so (when I could) and take care of the other miscellaneous tasks I'm responsible for.

I love my job. Where else can I work in and hang out on my couch in front of the window in yoga pants with a baby on my chest? 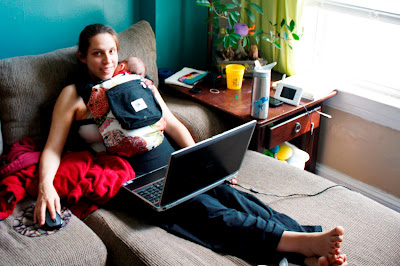 While I'm at it, here's one of Eric getting his sleepy baby snuggles one evening. The living room was super dark and I took it with my cell phone so it's not the best, but it's a nice memory. 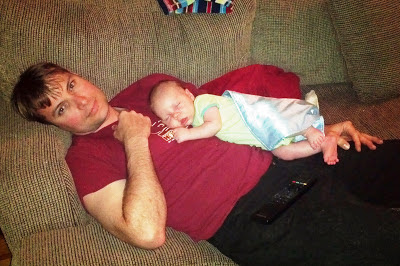 Jacob is sleeping more independently lately, in the crib for naps during the day and in the bassinet at night. Now that he is sleeping in longer increments at night (between 3 and 5 hours at this point, though he made it 6 twice this week), I stay awake during red-eye feedings and move him back to his bassinet when he's finished. Until last night he never lingered on the boob the way Hannah did. I'm hoping the lingering he's done in the last 24 hours isn't lasting.

He's definitely STARTING to settle into a schedule, and I've gotten really good at reading him and knowing when to lay him down. He doesn't fight sleep as much as Hannah did/does (sometimes I can lay him down awake and he'll just suck on his fingers noisily until he falls asleep!!!), but he has started to require a darkened, quiet room which is a bummer since it means that we either revolve around his napping or have a screaming, cranky, over exhausted baby. There are even times where he prefers to be laid down to sleep over falling asleep on my shoulder, and when he does sometimes fall asleep on my shoulder, he cat naps and is up within 20 minutes. He's very different from Hannah who never wanted to be put down or not paid attention to.

I don't have a clever way to transition into the name changing discussion and am realizing that this post is all over the place and is on its way to being WAY too long, but I'm not ready to wrap it up yet so consider this the transition into an overly long story of how Jacob came to be called Jacob (here's Hannah's name story if you don't know it already and want to).

Like many couples in the early, starry-eyed days of their relationship, Eric and I were guilty of day dreaming about how many kids we wanted to share (I was game for anywhere between two and four; he said two) and what we'd name them. Lucky for me, he loved the name Hannah Jane. His favorite name was Jack, and although so common a name had never occurred to me before (I know, I know, Hannah is not terribly unique either, but it has a great story!), I liked it (and him) enough to go with it.

When I was younger I kept a list of the names I liked--there were over 100 for girls including my all-time favorite, Chloe (followed by Zoey and Haley). I had maybe 10 for boys. The only one I remember from that list is Aspen...Since I had no favorite names for boys and since I was very decided on naming any girl child we should have, I told Eric he could name the boy (though I retained veto rights). It seemed fair, and although my mom taught me to realize that life isn't fair, I figure I can do my best.

Fast forward to last summer when we decided we were ready to go for baby number two. We tossed around some names in those first few weeks but ultimately decided to wait until we knew the sex to really talk about it. I had enough to do without wasting my time thinking of names for both girls and boys (although I couldn't help but do it anyway).

A few years earlier Eric's friends had named their son Jack so he switched his favorite name to Jacob. Again, not a name I would choose if it were up to me, but it's nice so I didn't object. I did ask that he keep his mind open and keep looking in case something came along that was either more unique (Jacob has been number 1 in popularity in the U.S. for 14 years and in the top 10 for two decades; it's number 3 in Maryland) or had a good story/meaning behind it.

Eric joined Ancestry.com in those first few months and mapped his father's family all the way back to the 1600s when they were still in Europe searching for a family name with a good story (or for anyone named Jacob). He found an entertaining story about an early American settler ancestor who was over 7 feet tall named Daniel, but he didn't love the name (of course, given the gargantuan size of our baby, this namesake may have been right on), and there are no former Jacobs (ours is the first!). He did find a great middle name that we both love: Romer. It was the middle name of his dad's grandfather and the maiden name of the grandfather's mother. His dad was very close to his grandfather, so that gave it the meaning that we were looking for.

He also searched the internet, reading baby name list after baby name list, but he always came back to Jacob. I searched and searched too. I found plenty of names that I like, but none of them seemed right (for instance: Mateo. I love that name! But it doesn't fit...).  Then one night when we'd gone to bed too late, and I was laying in the dark wondering what we'd name him, the name Griffin popped into my head. I hadn't seen it on any of the baby name lists I'd looked at, and I'd only ever known one Griffin, a junior climber at the climbing gym who I hadn't seen or thought of in over a decade. The subconscious is a funny thing. I half-jokingly told Eric that the baby had channeled me and said his name was Griffin, and in his half-drunken state, he loved it. He loved it the next day too, but then the next day he was leaning toward Jacob again.

For whatever reason, I felt a really strong tie to the name Griffin, and I imagined that the crazily active baby boy I was carrying was in there flapping his mythological wings (whatever he was doing, it was more than just kicking). I tried not to push it though and assured Eric that the decision was his to make. He stressed about it, liking that Griffin was so unique, but still leaning toward Jacob because it's "strong." He worried that I wouldn't love the baby as much if we named him Jacob. I assured him that not loving the name would have no impact on my love for the baby and reminded him that I like the name Jacob just fine. If I hated it, I'd have vetoed it, but I don't, I just don't love it. I don't have to though.

He decided to wait until the baby was born and see what he looked and acted like before deciding. By then, I had accepted the name Jacob and had even started referring to him as Jacob and telling people that that was the name we had decided on. Realizing that Griffin is the last name on the Family Guy took away some of its appeal for me...

We filled out the birth certificate paperwork our midwife provided ahead of time but left the name part blank. Shortly after Jacob made his entrance into the world, our midwife began filling out her paperwork and finishing ours. She asked his name, and Eric immediately replied, "Jacob." I remember thinking, so much for getting to know him first! But like I said, I'd already bought into the name Jacob so I was fine with it.

In the month that followed, Eric repeatedly said he thought he might have made a mistake and that our snorty little curmudgeon was more of a Griffin than a Jacob. I didn't say much the first two or three times he said it; I didn't take him seriously. The next time he said it, I agreed and said that it probably wasn't that hard to change it, then I dropped it. A few days later, on the Saturday morning of the Montessori spring fest and the weekend that I first posted here that we'd be changing the name, Eric woke up determined to change the name, so we started to call him Griffin that day, and on Monday I ordered the paperwork. In Maryland, you can change your baby's name once within the first 12 months without having to pay a fee or jump through many hoops.

Eric was back on the fence before the paperwork arrived. He remained there for a couple weeks, and then last week decided that in lieu of any good reason to choose one over the other, the fact that it was easier to just keep it the same (especially since Hannah kept calling him Jacob even when we started calling him "baby brother" or "the boy" (me the former, Eric the latter)).

After reading through this, I'm realizing that Jacob's name has a story after all. It's his own story since he's the first one (on Eric's side anyway, we have a Jacob on my side--I think he was the first American-born, but I'd have to have my mom double check). It's not very interesting, but it's a story!

And now, to make up for posting such old pictures at the beginning of this post and then rambling on incessantly about our inability to settle on a name, I took some mug shots of Jacob this morning. Current baby shots! I was hoping to capture his dimple and cute little smile, but he's not used to the camera being in his face yet and wore his confused face instead. 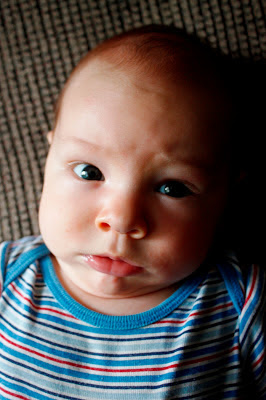 This is the closest thing to a smile I could eek out of him. Oh! He's 2 months old today! I just realized that it's June 2. 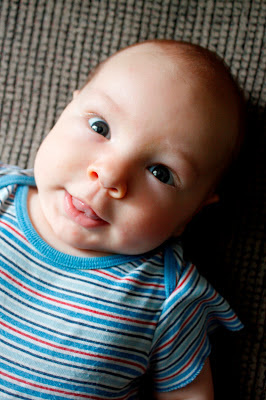