Hannah's Bad: hamming it up at the spring dance recital


Hannah's spring dance recital was the same day as HonFest so after a little rest, I slicked her hair into a bun, packed her costume, shoes, and snack into her backpack, and let Grammy walk her to the church around the corner where her school holds their performances. Eric followed shortly after, and Amy and I were right behind him after a trip to the grocery store to grab some last minute flowers.

The theme was light and dark so each class did two dances, one to something very saccharine and one to something with a little more edge (in some cases, a little too much edge...). Hannah's class danced ballet to Twinkle, Twinkle wearing the tutu she's pictured in below, and then in the second act they traded their tutus for jazz pants and their ballet slippers for tap shoes and danced to Michael Jackson's Bad. It. Was. Awesome. Hands down one of the most entertaining performances I have ever seen, and yeah, yeah, I know, I'm partial, but seriously, it was so cute. I can't wait for the video so I can try to clip out her scene and upload it everywhere.

The best part was at the very end when each class comes out one at a time to take a bow. Hannah aced this part. She bowed by tucking her chin to her chest and rolling her spine down a little rather than by folding at the hips, and she did it over and over and over again. She kept bowing and smiling this huge smile long after the rest of her class had stopped, and she kept it up even as the next class was filing out in front of her class. Then she poked her head between the shoulders of the girls who ended up in front of her and continued to bow! We were cracking up laughing. How did she get to be such a ham??

There's no flash allowed during the performance and although the stage is very well lit, all the pictures that Eric took during the performance are blurry. We hung around after the show and managed to talk Hannah into putting on her tutu again and posing on the stage for a few shots. She wasn't thrilled about it as you can tell from the forced smile, but she humored us. 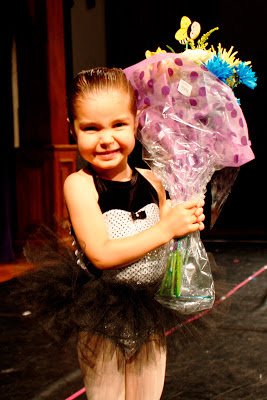 Since Eric was manning the camera, I took advantage of the opportunity to be in a picture--the first picture of me and both kids! 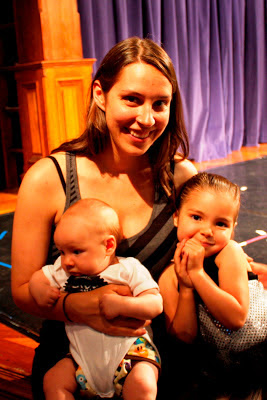 Eric declined his chance to be in a pic, so did my mom, and Amy tried to as well, but I managed to talk her into it. 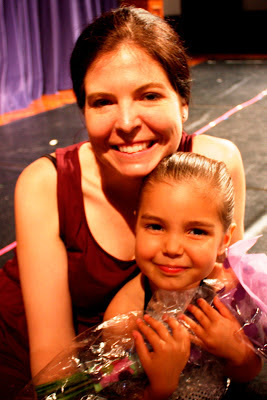 We're taking the summer off but my guess is that she'll want to start dancing again in the fall, and I'm in favor of it because in addition to the obvious reason of wanting her to be happy and do the things she enjoys, I think that getting comfortable in front of a crowd at such a young age is a great experience and a huge confidence booster. Anyway we just inherited some leotards and tights so that'll cut down on our initial costs! All we'll have to do is stalk the consignment shops for new tap shoes and ballet slippers.....
Posted by terri at 9:17 PM