I love Oregon Ridge. We trekked up there over Memorial Day weekend to shake out the crazies that had accrued after being couped up in the city for so long. [Segue to Eric who took hostage of the blog when I ran up to feed the baby.] Speaking of couped, check out these cool chickens. Hannah did her usual trick of feeding random animals grass and this time voila! The chickens loved it. She was sitting in a little patch of clover and the chickens gobbled it up. Speaking of gobble.....the turkey was nowhere to be found on this day. Hmmm..... 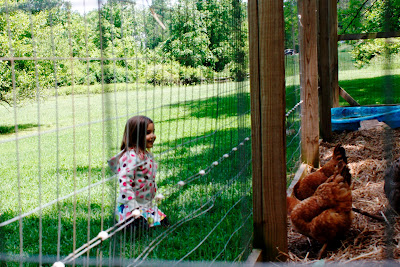 Next to the chicken coup was a rustic little playground made up of carved tree trunks, logs, and  rocks. I was definitely getting some ideas for when we get land. 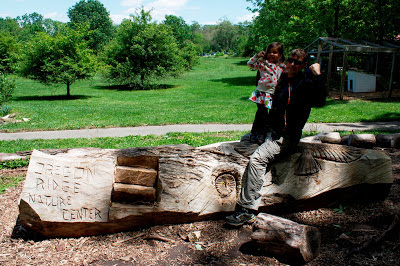 Mushroom tables, the Cheshire Cat must be close by.....I can totally make these. 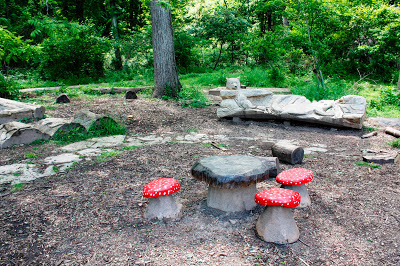 This one would be more of a challenge. Hannah wanted to pose. So we obliged. 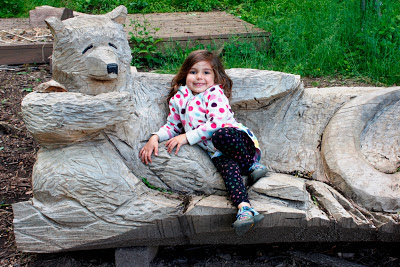 I can make a better homemade see-saw than these. Larger and higher of course, just like the good old days when I was a kid and your friend would lift you all the way to the top and hop off just to watch you fall. Good times. [I'm editing before posting and feel the need to insert my own childhood memory of having the wind knocked out of me twice when a "friend" pulled that on me. Not cool. I stopped getting on those things as a result.] 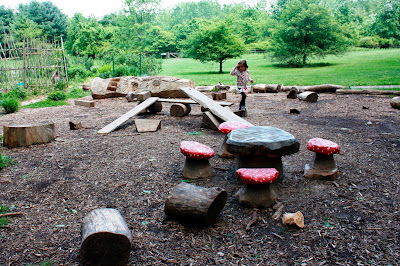 Mamarazzi forgot to break out the camera during our trail walk around the lake. It was a challenging trek and included a rickety double log bridge 10 feet off the ground with a weak little hand rail. Terri wanted to turn around so I grabbed the baby and carefully made my way across to allow Hannah and Terri some concentration time. [I did not want to turn around! He lies. Also, Eric already had the baby. We switched prior to getting on that trail because the not-so-little one was straining his mama's back--I'd already been wearing him for over an hour.] Luckily, our bravery paid off. We found this cool little frog pond down round the holler. Hannah could not get enough of picking up the tadpoles and tossing them pack into the pond. At one point she had a few in her hand and very quietly whispered "I won't hurt you little tadpoles. Shhhhhh," and then stood up and hucked them half way to the other shore. I would have been shocked had I not been more impressed with her arm. 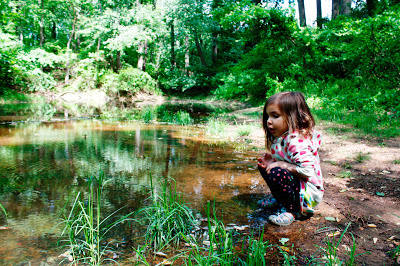 [The next pic was my attempt to capture the oodles of tadpoles. All those black specks in the water below, those are tadpoles. There were clouds and clouds of 'em; they filled up the pond. Pretty sure the photo doesn't depict that, but take my word for it. I want to go back soon and look for frogs.] 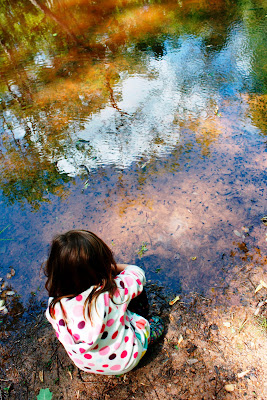 [The next is my favorite--adding to the folder of pics that I someday hope to frame.] 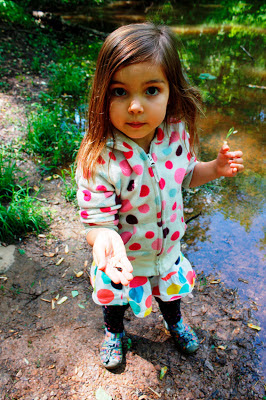 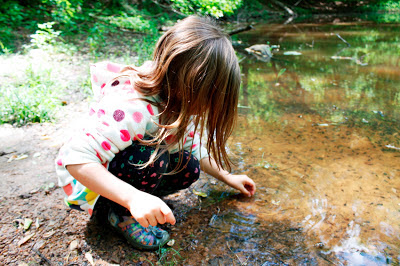 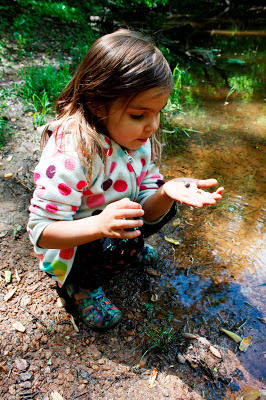 I guess Eric didn't think a conclusion was necessary, but I can't just leave you hanging without reiterating how awesome Oregon Ridge is and how much spending the day there chilled us all out. All four of us were being cranky butt heads leading up to that, but there was peace all around on the way home.
Posted by terri at 9:34 PM