Gentle giant has his 2-month weigh in

Jacob had his 2-month checkup on Monday and weighed in just half an ounce shy of 15 pounds (Hannah was 2 ounces shy of 12 pounds at her 2-month checkup; she didn't hit 15 pounds until she was 7 months old). He is in the 95th percentile for weight and is putting some serious strain on his mama's arms and back as a result. The other numbers don't mean as much to me, but if you're into them, he is 24 3/4 inches long and his head is 44.5 centimeters (Hannah was just an inch shorter at her 2-month checkup, but her head was MUCH smaller at 39.7 centimeters; like her weight, her head wasn't 44 centimeters until she was 7 months). He's in the 99th percentile for both length and height. Numbers tend to just float around my head in an attempt to lodge themselves someplace where they will be understood, but sadly, that place does not exist. More important to me is his growing social awareness and the fact that I have been able to get little laughs out of him in the last few days. Just teeny ones, a little "heh" here and there, but they're so awesome that I spend the following 15 minutes trying to get him to do it again. He smiles huge, flashing that one little dimple he has on his left cheek, and he coos and talks, but at this point, the laughs are still rare and therefore highly coveted.

I'm wishing I would have saved those head shots I took of him on Sunday for this post, but since I didn't, I'm re-posting one of them with a twist: it's baby face comparison time again! I don't have 2-month baby pics of either me or Eric, but here's a pic of Hannah at about 2 1/2 months to compare to Jacob at exactly 2 months: 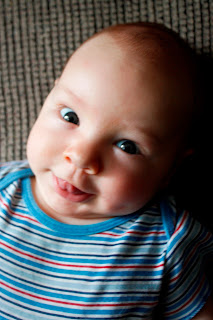 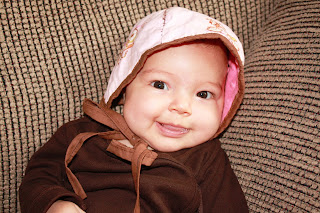 Smiley little babies with their tongues out!


Back to real time, here they are last week posing in the shirts that Hannah made with Grammy on the morning that Jacob was born. It was pretty tight on him when I put it on that morning so I made sure to get a picture, and when we stripped him for bath, that one got set aside. I want to keep it but need to figure out how...I don't have a keepsake box and don't want to start another. Maybe a quilt? 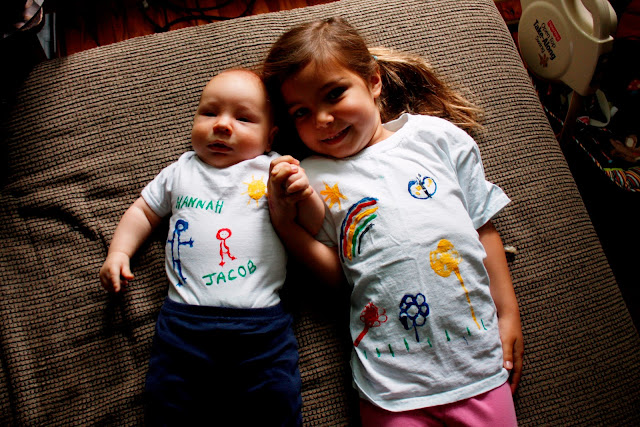