I wanted to post pics from Hannah's dance recital tonight, but I'm wiped out after an entire day of jury duty (in spite of the fact that I spent the whole time sitting/laying on a couch and even took two naps). Then I remembered that I have these cute pics of Amy and Hannah that I still haven't posted, and voila: a blog post that doesn't require much energy is born!

Joel flew in from New Zealand late on Wednesday night of last week, and after resting up in a hotel room for the night with Amy, the two headed for us in Baltimore. The second they walked in Hannah took Amy up to her room and both found Belle costumes. Hannah's was an impulse buy at a consignment shop when we bought her tap shoes. Amy's is my junior year prom dress that I keep around only because it seems like a fun thing for Hannah to play with.

The two Belle's paraded downstairs--Amy with a red boa that Laura brought back from New Orleans wrapped around her head as a crown of roses--and posed for pictures. 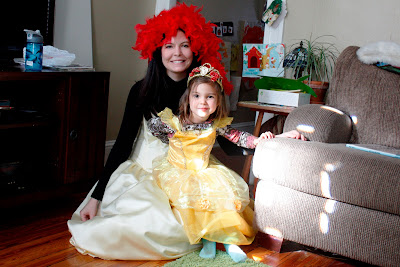 And then they read a book because Belle loves to read, and because Hannah had had library time at school that day so she had a new book. 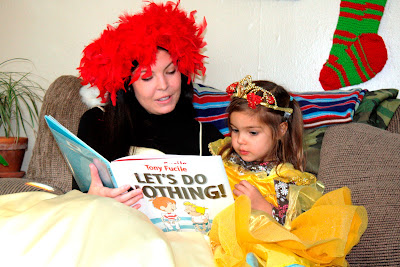 There was also a parade that involved them marching around playing musical instruments, but I'd put the camera down at this point.

After dress-up, Hannah and Joel built a bear fort in the basement and stayed there for a couple of hours while Amy and I worked. That was a little harder to get pictures of so you'll have to use your imagination. Rest assured that it was beyond cute and that Hannah loved having two of her favorite playmates around for the day.
Posted by terri at 8:34 PM