I didn't bother bringing my camera to Hannah's dance recital last weekend because of the no-flash rule. I figured that in a dark setting like that, no flash would yield blurry, un-postable pics. It wasn't as dark as I'd anticipated though, and fortunately, Sondra brought her iPad, which, even without a flash, managed to take some halfway decent shots. I'm not a big fan of Apple ever since owning one of their laptops in the years after college and fighting with it the entire time, but one thing I covet about those products is their cameras....

The Holiday Diversion program included dances to The Nutcracker, Christmas songs like Rudolph and Frosty, and some other random songs with ballet, tap, and modern dance routines. Hannah's class played the part of the mice in The Nutcracker and had a tap dance-off with another class who played soldiers. The kids were beyond adorable. Most of them had no clue what they were doing, and it was the cutest thing ever. Hannah came out and spent more time trying to pick us out of the audience than dancing. I felt bad because in spite of the fact that we were front and center, she didn't see us until she came out at the end for her bow. I spent the rest of the performance wrought with anxiety over the possibility of her thinking that we weren't there watching.

As far as I could tell, she didn't have any stage fright. Below is a pic of when they first came out and found their tape. They stared at each other for a while until their teacher stood up and helped guide them through their tap moves. 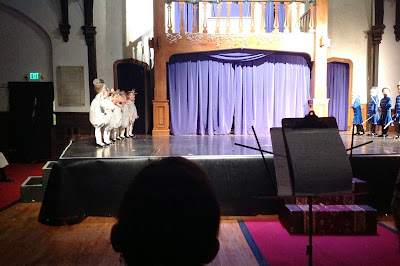 Hannah is front and center in this one so you should be able to pick her out. I think they were supposed to scurry through the soldiers... 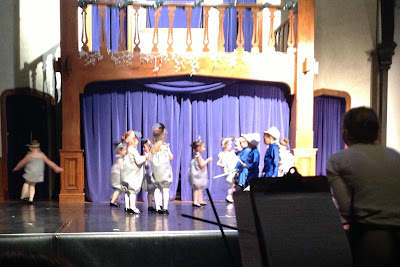 She was in a better position for photographing when she came out for her bow. Look how cute they are in their little mouse costumes! Their teacher is a one-woman show. She makes all the costumes, runs the studio, teaches all the classes, choreographs all the dance moves, organizes the whole performance, etc..... 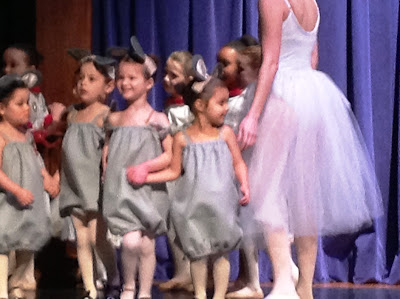 This next pic was taken shortly after she spotted us in the audience. She's mouthing the words "mom," "dad," and "grammy" and waving. (She hadn't yet discovered my dad and Sondra sitting on the other side of me.) 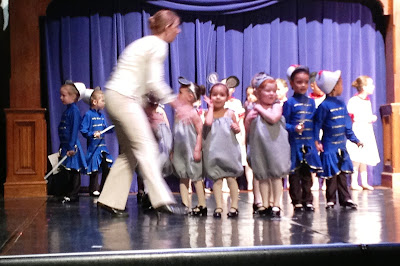 Shannon made this perfect little bouquet for me to give to Hannah after the show. She added blue thistle both for texture and because it's Hannah's favorite color. 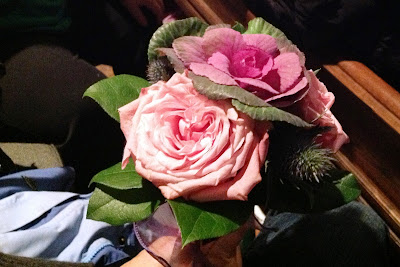 After the performance the whole audience hovered around waiting for the dancers to get out of their costumes and come out. I'm not thrilled with how that whole scene went down. Fortunately my mom was standing up near the backstage door and caught Hannah as she came out. I was standing back a bit, trying not to crowd the door. I figured I'd see her backstage mom and would beeline to the front then, but her and a few other girls came out without their backstage mom, and they're so short that they just stood there all bewildered by the crowd of strange faces. I felt guilty about not being closer for days and vow to handle that differently should there be a next time. In the meantime, grammy saved the day and scooped her up.

I gave her a big hug and her bouquet, and Sondra snapped some more pictures. 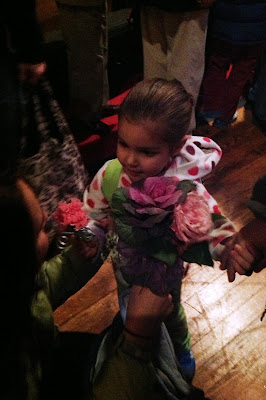 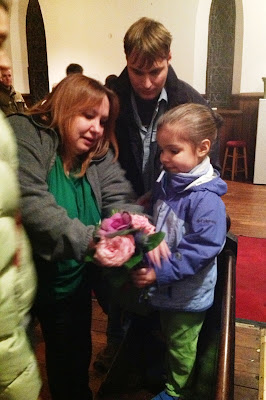 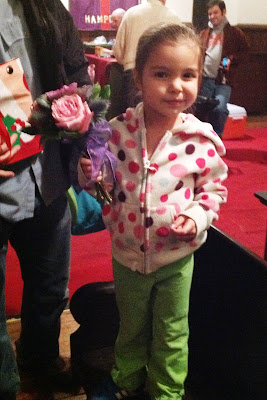 Then we walked back to the house (the recital was right around the corner), and Hannah hung out with pappy and grandma Sondra for a few minutes while I whipped up some dinner and then hurried her off to bed. 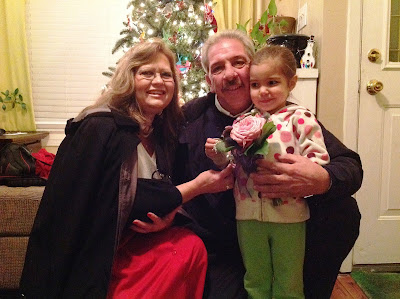 We ordered a DVD so if anyone is interested in seeing her brief little mouse dance, stop by in about 6 weeks.