'Tis the season for holiday crafts, decorating, and the Mayor's Christmas parade!

I don't authorize the use of Christmas paraphernalia until the first weekend in December, and fortunately, that weekend also happened to be the only weekend this month that is not booked solid. We woke up slow on Saturday morning and putzed around in our pajamas for longer than usual. While I made our weekly batch of blueberry pancakes, Eric and Hannah whipped up some salt dough for this year's ornaments. (I'm saving those pics for another post dedicated to the ornaments if and when we ever finish decorating them.)

After popping the ornaments in the oven and the pancakes in our belly, Eric and Hannah dug into the Christmas box. I camped out on the couch with my hot water and watched. (I don't get on stage until act 2.) 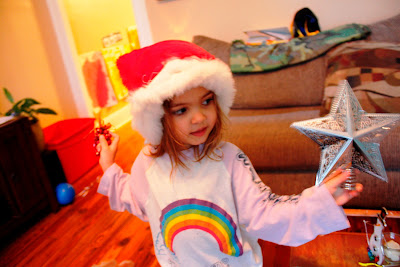 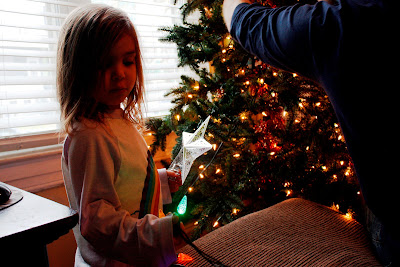 Hannah dug into the ornaments while Eric was still straightening out the "branches." 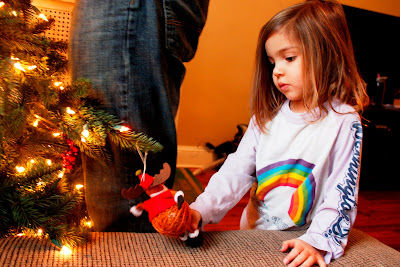 After Eric finished stringing up the lights, Hannah topped the tree. 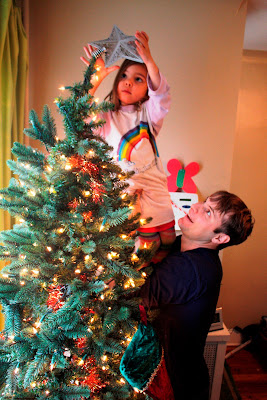 And then it was time for act 2: ornament hanging. That's where I come in, and Eric takes the camera. Hannah had put a bunch of ornaments in the only spot she could reach so I helped her spread out some of them, especially the breakable ones. Our only casualty was a pickle. I was quite fond of that ornament and am still trying to find a way to salvage it. 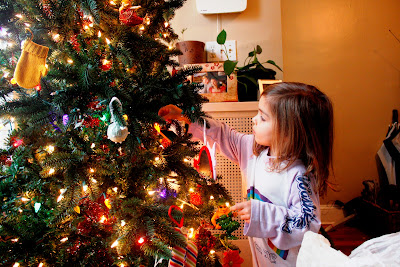 Check out that baby belly! I've been meaning to take and post a belly shot since I'm popping pretty good now, but those good intentions of mine take a while to come to fruition. Luckily we have occasions like this in which it's inevitable that I end up in a picture and you end up with a view of my increasingly bulbous belly. 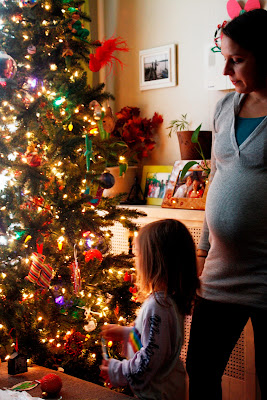 That afternoon my mom drove down to take Hannah shopping for presents for me and Eric. We started off at the Charm City Craft Mafia's Holiday Heap thinking that a random impulse buy from there would be a ton more fun than a random impulse buy from the mall, but the place was crowded, and Hannah couldn't deal. I imagine that crowded places, stressful to begin with, are far more stressful when you're no taller than anyone's waist. So the split up and shop thing didn't work, but she was fine once Eric picked her up, which meant that we all still go to walk around and check out the cool stuff, we just won't have any of it to open come Christmas morning. I did buy Eric a birthday present, and he bought Hannah a rather morbid print.

Then we went to Target and Hannah shopped for us there while Eric and I picked out birthday presents for two of the three kid birthday parties we'll be attending this month.

The holiday festivities rolled into Sunday with the Mayor's Annual Christmas Parade, which, lucky for us, happens to be in Hampden every year. We walked north to hang out with Brody and Addison near the start of the parade. On the way there, Hannah started freaking out about those carts with crap toys and balloons for sale. We promised to buy her something when we made it to our destination in spite of her poor attitude, and that's how she came to be the owner of the green fuzzy dog in the pic below. 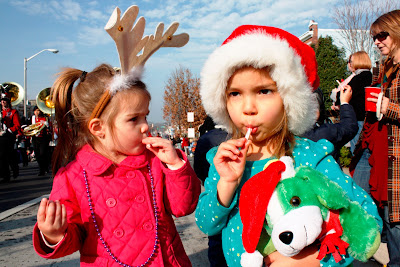 Also noteworthy in that pic is the candy cane Hannah is sucking on. That's her first candy cane. My number one complaint about the parade: more candy was thrown at us than on Halloween, and when I say "thrown," I mean that literally. Every single group that came down that parade path pitched a bunch of artificially colored sugar in various wrappers in our direction. What is the obsession with "treating" kids to this crap???? It was insane and borderline nightmarish for me, but Hannah is awesome. She knows we don't eat candy, and although she ran to collect it, she didn't ask to eat it. She just said, "we don't eat candy, right mom?" and handed it all over to me. I then snuck it all into Brody's bag. But then somebody threw out some dum dums, and I saw her eyes light up, and so, I gave in again and let her have the lollipop. But that's it! When more dum dums showed up at our feet, she didn't even ask, just collected them and handed them over.

The weather was beyond awesome this weekend, and the groups in the parade were a riot to watch. My favorites are always the dancers, but there were other highlights as well including the Charm City Roller Girls. Someday I am going to make it to one of their meets. Are they called meets? Comps? Games? No clue... 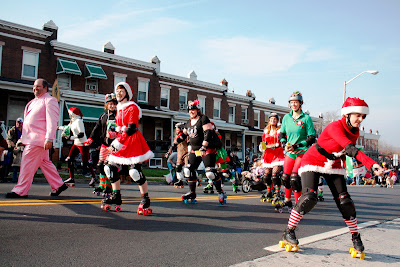 Rudolph was not a personal favorite of mine, but the kids loved him. 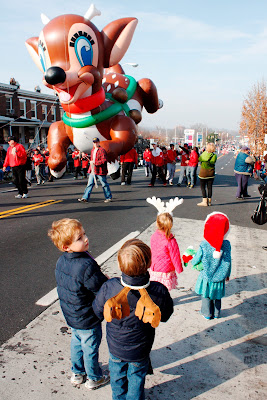 This guy is a personal favorite of mine and ranks up there with the dancers for people I most like to look at in a parade. 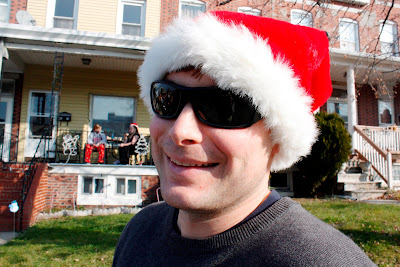 These guys do too. 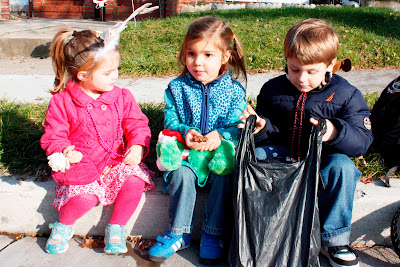 The HampdenFest Toilet Races! Woohooo! I wish I'd seen them coming before they hit the patch of bright sunlight--totally screwed up this photo op. 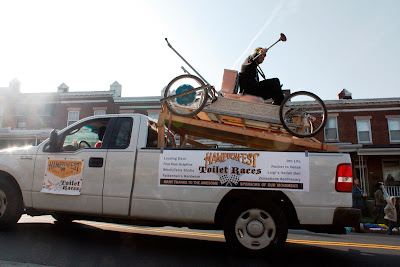 If I were going to be in a parade as an adult, I would like to drive one of these miniature big rigs, but not the one that was smoking wildly. 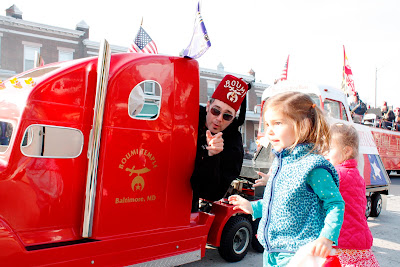 Hannah did a lot of dancing when the marching bands came through and gave her a beat. I sucked at catching the dancing, but here she is during a dance break. 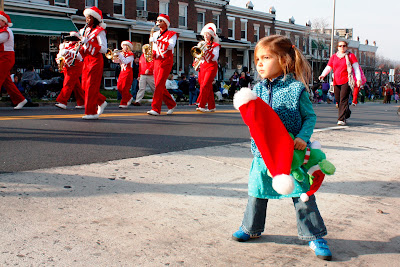 My most favorite sight was not the skateboarding dog pictured below, but the skateboarding mom with the toddler on her hip who zoomed past with this group right faster than I could capture her. I'm bummed to have missed that photo op, but the mental picture I have of her is awesome and totally inspiring. 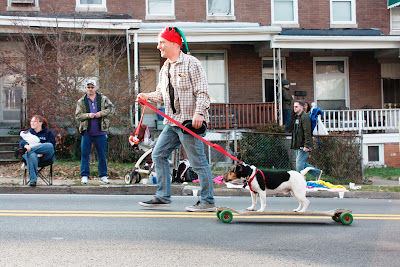 And that's it! We walked home after about an hour and a half so Eric could pack up and hit the road. He has been at a training in Virginia all week.

I probably should have made this two posts rather than lumping it all into one overly large weekend post, but I'm crunched for time again, and another super festive and fun weekend is upon is. We have tickets to see The Nutcracker at the BSO this weekend. It's part of their family concert series which means the performance is only an hour. That's really about as much of The Nutcracker as I can handle. I like dancing and theater, but I remember being very bored the few times I went to see the Russian ballet perform it. There's just only so long that I can sit still in a dark theater before I lose both my mind and all feeling in my butt. I suppose that means I have the attention span of a child...Thank goodness for the BSO family series and it's shows tailored to kids and kid-like adults!
Posted by terri at 9:14 PM