Hannah has been getting increasingly good at swimming lately so we decided the time was right to put her back in swim lessons.  The ones she took at 7 months were nice and all, but not worth the money to repeat. I was talking to one of the lifeguards on duty last Friday during our weekly swim, he told me that the 2- to 3-year-olds in his class weren't doing what she was doing and that if I did put her in classes I should put her in the next class up, ideally with her friend, Ella, who swims with us every Friday. Ella is 4.

I picked up the swim lesson schedule after that but didn't like any of the available times and neither did Ella's mom. There's a note on the bottom that says you can create your own class if you've got  a group of at least three. Since we're just two, we opted to fork out the extra dough for semi-private lessons. We figured it was worth it to have the class at a time that's convenient for us, and worst case scenario, we'd determine that it wasn't actually worth and not do another session.

It's totally worth it though.  Eric happened to take off work today so he got to witness the awesomeness along with me. We're sold. She got so much attention with it only being her and Ella in the class, and she did amazing! Lamont, her teacher (we requested him because he's been there a lot on Fridays when we're there so the girls are familiar with him--he's the one I talked to the previous week about lessons), said that she surprised him as well.

Lamont let them keep their floaties on at first and worked with them on reaching and pulling back and forth across the pull, then kicking with straight legs, and even putting their faces in the water while swimming! It was so cool. Hannah is used to jumping in and totally submerging, so her face gets wet constantly, but she's never put her face in while swimming. Eric and I sat on the stairs at the end of the pool and watched with big, cheesy grins on our faces. Every time Hannah made it to one wall, she'd turn toward us and yell, "Mom! I did it!" and we'd cheer and clap. We were so proud!! I forgot my camera, but Ella's mom took some pics with her phone and sent them to me. Some are blurry, but I figure they're better than nothing!
Here are the girls reaching and pulling across the pool. 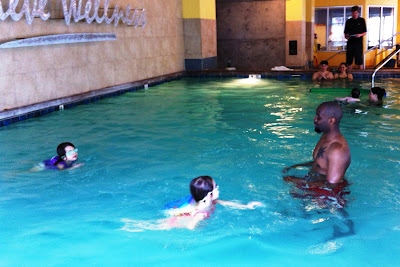 The next lesson was to kick and pull on their backs. 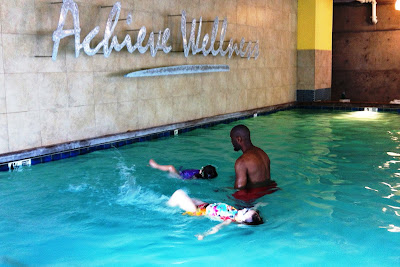 I wish this one were more clear! 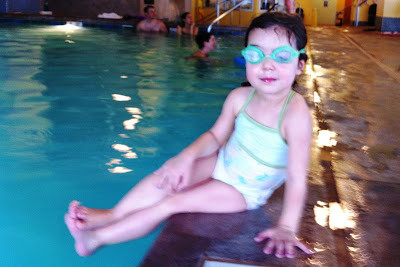 Ella swallowed some water while kicking across the pool and took a break toward the end so Hannah got some personalized attention. Here she is trying to trust that Lamont has her. She was a little freaked out, but she perservered.﻿ 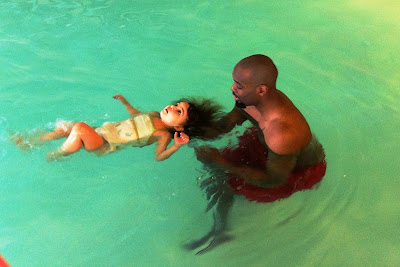 Toward the end, Lamont was trying to teach Hannah how to push herself up off the bottom in case of an emergency. She didn't quite grasp that concept, and instead tried to swim and keep herself up. Apparently most kids that age naturally sink; he was shocked when she tried to swim instead. He said that given his experience with kids her age, she did far better than he expected. 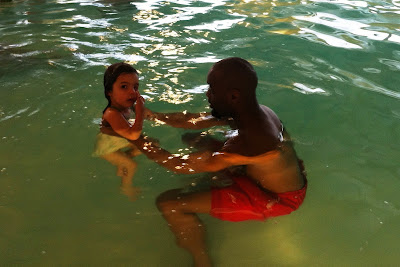 I'm so glad that Eric had off work today because it was seriously awesome and really fun to watch, and there's no way I could have possibly explained it to him (or to you, for that matter!). At least now there's no question that we are both on board with this and that it's totally worth the money.

DETAILS (since I got a few questions)

Email ThisBlogThis!Share to TwitterShare to FacebookShare to Pinterest
Labels: swimming