All this warm weather is making me feel claustrophobic with our city life and desperate for more green space than the 4x8 plot between our sidewalk and the street and the window boxes. Since there's nothing we can do to get a yard right now, I decided that we should treat Cylburn Arboretum as our backyard. It's close and it's awesome. Wide open space, trees, fields of flowers, walking trails....And yeah, you can hear I-83 from parts of it, but it still rocks.

Since we're between music class sessions, I took Hannah to Cylburn for some fresh air on Thursday. It was pushing 80 that morning and the daffodils were in full bloom. Good thing I brought my camera!

We got about 3 feet from the parking lot when Hannah spotted a lone daffodil. She sat down beside it and spent the next 10 minutes assuring it that everything was okay. She's got a very big heart. Eventually I convinced her that the daffodil would be okay if we left it for a bit to explore life beyond the parking lot. 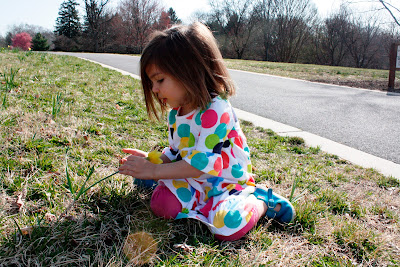 The only thing better than a lone daffodil is a whole maze of them. Hannah wove her way in and out of the plants being careful not to step on any and then cheered for herself when she made it to the other side. She also struck a few poses while in the maze that I happened to catch. 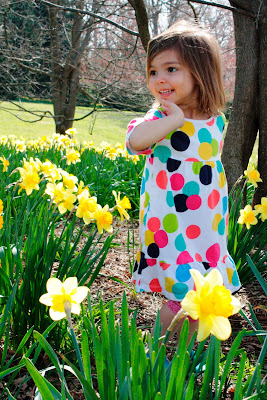 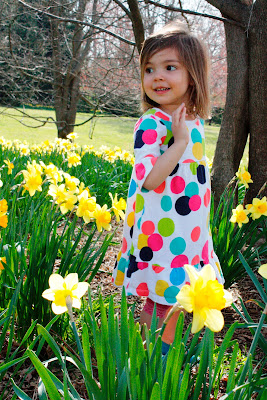 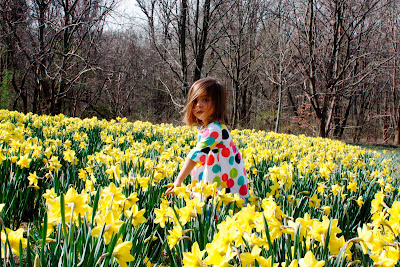 We headed for a trail then and instead of taking the Circle trail, the easy trail that meanders around the perimeter of the park, we accidentally ended up on some crazy trail that went straight down for a long time and then around a bit. I was starting to get worried (and tired and hungry) so when I spotted a narrow trail heading back up, I took it.  When I didn't see the park at the top of each crest, I worried more. Then I saw a discarded bath tub and I really started to worry. I'm pretty sure the park would have picked that up...Then there was a fork in the path, and I followed my keen sense of direction and kept cruising with Hannah on my shoulders and sweat starting to trickle, and up ahead I saw gates...This was cause for more concern, but when we got closer, I saw that they were gates to the park. Hooray! We made it back! Note to self: do not take random trails when alone with a young child. These are adventures better had when Daddy is there with his big, strong shoulders that are better for child carrying than my own. 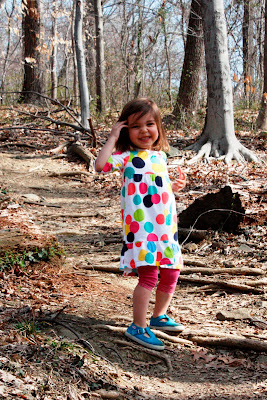 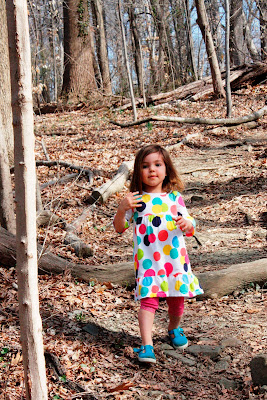 After all that we plopped down in the first patch of grass that we found to have a snack. Then we climbed a few trees. 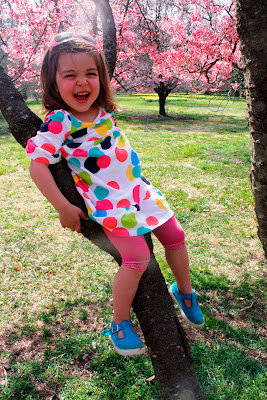 Hannah pulled a flower off the tree and carried it back to the lone daffodil on our way out. We spent another 15 minutes introducing the two flowers and assuring them that they would be the best of friends. 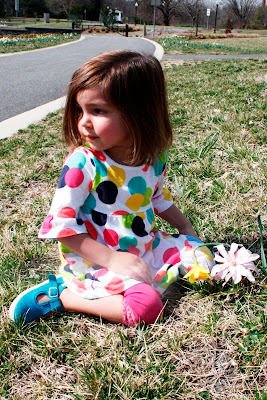 We went back to Cylburn on Saturday after nap time, and the pink flower was nowhere to be seen. Luckily Hannah didn't notice that it was missing. She did notice the lone daffodil again and we sat there for another 15 minutes and played with all the baby ladybugs (they looked like ladybugs in the larval stage--who knows if that's what they were or not but there were a ton). The bugs kept Hannah very entertained while we waited for Brody and Addison, and after they got there, there was no stopping the kids. Brody is like a treadmill for Hannah inspiring her to run everywhere and run fast. It's fantastic. I wish I'd taken pictures of the three of them running around together, but I left the camera at home that time.
Posted by terri at 10:02 PM