Saturday was such a fun day! We took Hannah to this beautiful farm just outside of Harper's Ferry where Amy's mom and sister board a horse and spend most of their free time. It was probably the coldest day of the week, but sunny and clear and just plain amazing.

Hannah greeted the chickens and Roger, the wild turkey, first. 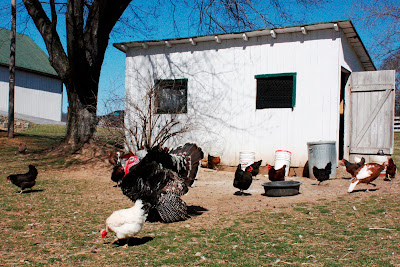 Then she fed Leroy, the fainting goat.  He's a very timid animal who ran to the corner to hide when we came in and only ventured out a teeny tiny bit to nibble feed from Hannah's hand. Once she took a few too many steps into his corner and he jumped up behind the chicken pen (the wooden thing on the left side of the pic below) and tried to make a great escape. She backed up then, and he came back down. (The chicken family in this pen are called the Walter's. They're a special breed, and that's why they hang out with the goat instead of running around the yard with their chicken cousins.) 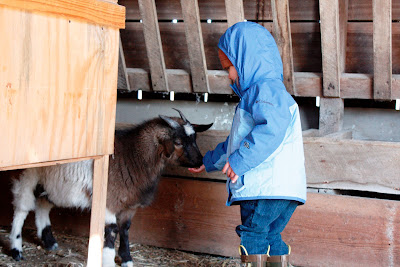 From the Leroy's pen, I was watching the dogs run around the yard and was overcome with an amazing sense of serenity and peace for the upmteenth time that day so I snapped a few scenery shots in an effort to capture the feeling. I forgot my polarizing filter and it was pretty dang sunny, so most of my outdoor pics are super contrasty, but even with that I think you can get a pretty good idea of how idyllic this place is. 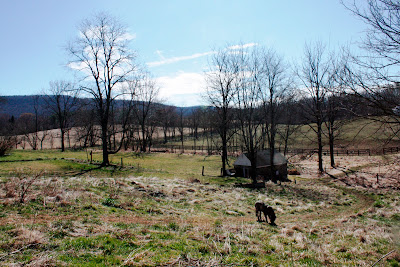 From Leroy's we headed down the path to where one of the horse fields is. (The goat pen is the little building on the left in the background, and you can see the barn in the middle and the house off to the right.) 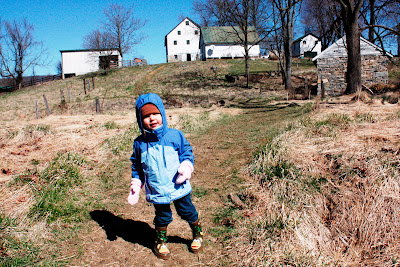 Four horses live in the herd in this field; this one is Rain. This is probably Hannah's first up close and personal encounter with a horse. 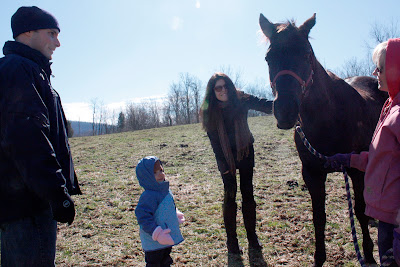 And this is Desi, Janet's and Sharon's horse. We brought lots of carrots to feed the horses, much to the horses delight. 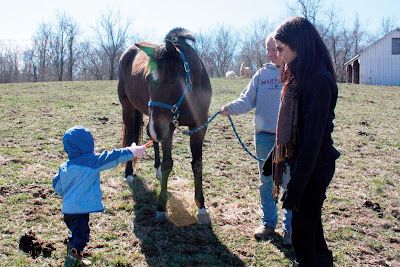 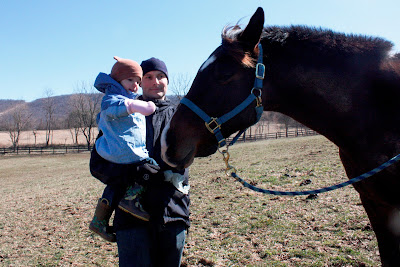 Here's another scenery shot, this time with Sharon walking Rain out of the field and up to the barn to get saddled. Rain is older, smaller, and easier than Desi so she was elected to circle our little munchkin around and around the pen while Desi, who came along for the walk, stood outside happily chowing down on grass. 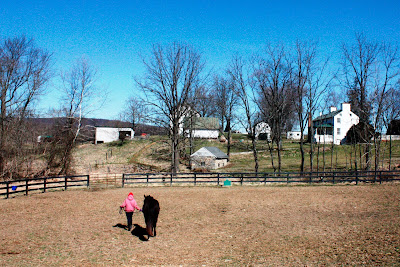 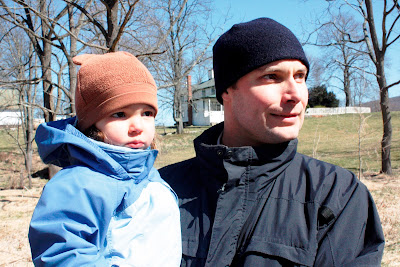 While in the barn saddling up Rain, one of the other horse owners stopped by and said she was suprised that Hannah was so comfortable with the horses. Apparently most little kids get intimidated when they get that close to an animal that big. That makes sense, but the idea that Hannah might be afraid never even occurred to me, and it didn't seem to occur to her either. She climbed right into the saddle and sat quite there quite comfortably while Janet led her and Rain around and around and around the pen. 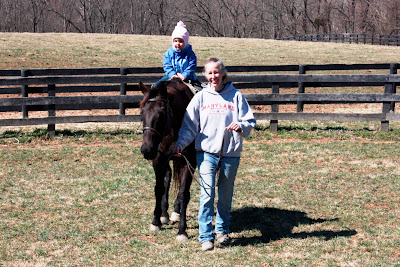 Before long she was using one hand to wave. I braced myself for, "Look mom! No hands!!"  but the little dare devil demostrated an iota of caution and kept at least one hand holding on for the duration. 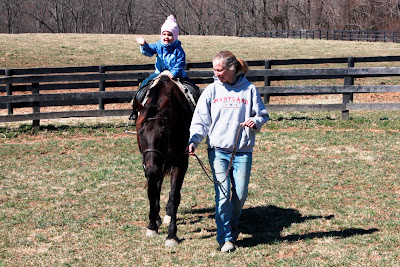 She was loving life up there; it took us a while to coax her to take a break. 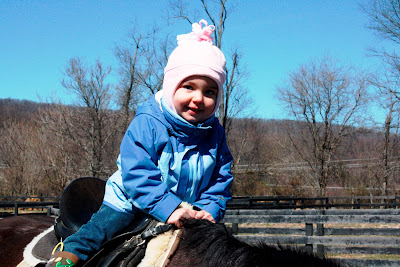 Eventually she decided to let daddy have a turn at riding. She hopped off the horse and beelined for the comfort of Amy's lap. 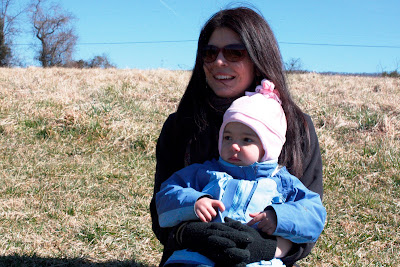 Rain is trained English style which reminded Eric of the horseback riding lessons he took as a kid. ﻿ 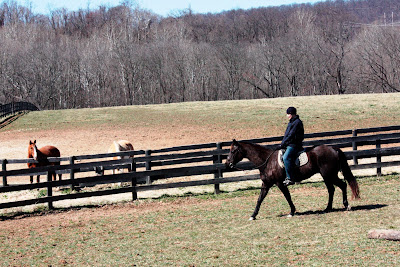 I took a turn too, but I wasn't feeling too brave and have extremely limited horse riding experience (limited to the one excursion we took while in Zion) so I let Janet lead me around the ring. I felt kinda silly doing that and am therefore not going to post any of the pics, but I'm glad I did it because it gave me a better appreciation for what Hannah's riding accomplishment. Just looking at a horse doesn't give you as much of a sense of how big they are as actually being on one does. I got up there and was slightly unnerved by how far off the ground I was, and I'm not afraid of heights.

I hopped off pretty quickly because Hannah started asking for another turn the second we pulled her off. Here she is again practicing her Miss America wave (yeah right!! I hope not!!). 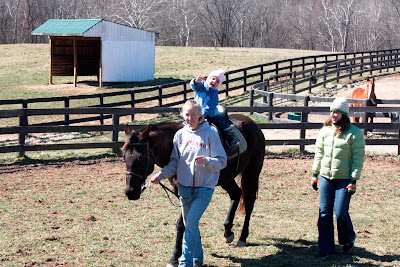 Somehow we talked her into getting off again and giving Amy a turn. 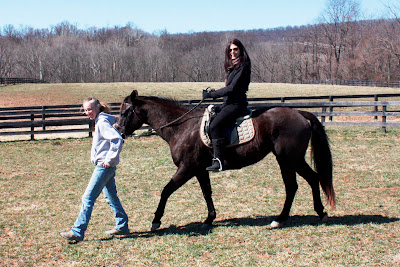 But that didn't last long. Fortunately, Amy didn't seem to mind sharing her turn, and it was definitely a safer ride for Hannah who insisted on riding with one hand. 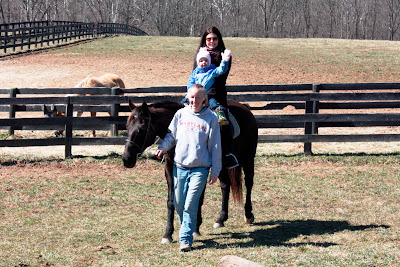 A brief moment with two hands holding on! 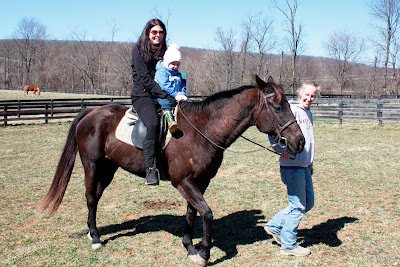 Back in the barn, Hannah helped brush Rain. 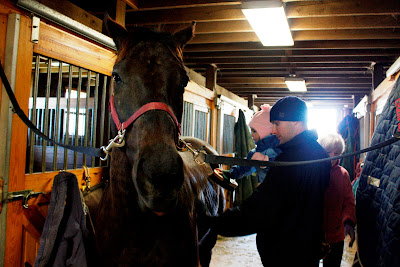 Then Sharon had a suprise for Hannah: a horse of her very own to take home! She loves it. She named it Desi, which, developmentally is a huge step for her since it's the first thing she's actually given a name to, and she did it without being coaxed. She sleeps with Desi and carries it around the house and rides it and talks to it and even feeds it carrots. It's a big hit. 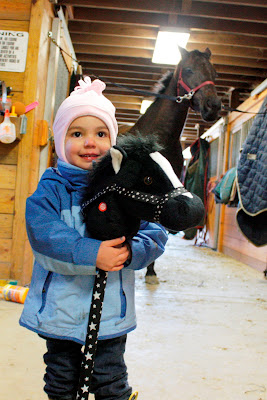 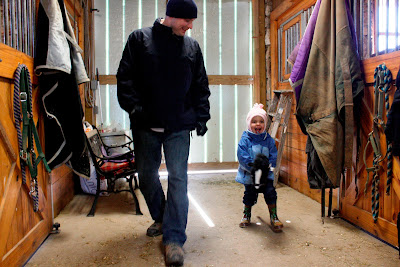 When it was time to walk Rain back to the field, Hannah helped Sharon walk her. 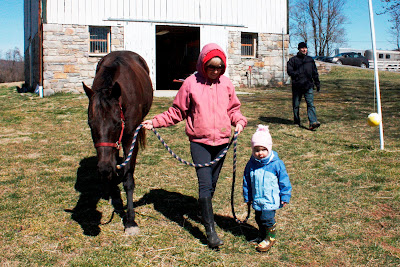 We met the other two horses in the herd then. I forget this one's name, but I liked how Eric was with it so I snapped a shot. 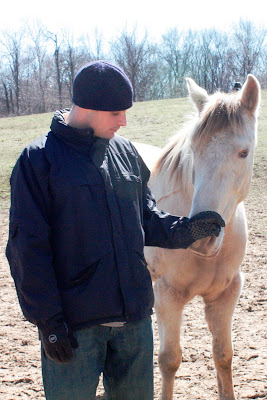 By this point it was creeping toward 1:00, and Hannah had been up since 5:30, and we were all starving so we were trying to usher Hannah into the car but she refused to leave. We gave in and let her stay with Sharon and Janet as she requested, and Eric, Amy, and I headed out to a nearby organic market to bring back sandwiches. It ended up being closed on Saturdays so we drove back and found Hannah and company in the house warming up by the fire. They'd walked down by the river, and Hannah had found two little eggs that Sharon presumed were from the Walter's chickens. Hannah washed the dirt off them in the river, and then carried them around the rest of the day. (Eric fried them for her for breakfast the next morning and she scarfed them down faster than I've ever seen her eat anything.) Trying to get her out of the house was far worse than trying to get her to leave yard earlier. She sat down on the dog's bed and insisted that she could just sleep there. Later when we talked about her favorite parts of the day, the fire gets a mention (even today she brought up the fire, and it took me a minute to figure out what fire she was talking about).

She was so smitten with this farm that it makes me want to try harder to get her out of the city and into a place with a yard where we can have animals (and maybe a fire place!). Maybe some day...In the meantime, Roger extended an open invitation to us to come back whenever.  Gobble, gobble! ﻿ 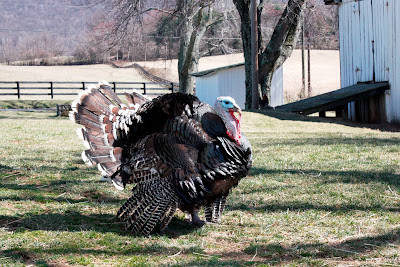 We are so lucky to have Amy, Janet, and Sharon in our lives and so grateful to them for sharing their little piece of awesomeness with us!!
Posted by terri at 9:16 PM