Hannah and friends do a little duckpin bowling

We managed to gather a good-sized group of friends at the duckpin bowling alley on Saturday, and we only had to plan it 2 months in advance!  We showed up first so Hannah had a chance to perfect her roll, and I had a chance to partake in a Hannah-centric photo shoot, which is good because when everyone else got there, it turned into an immediate mad house. 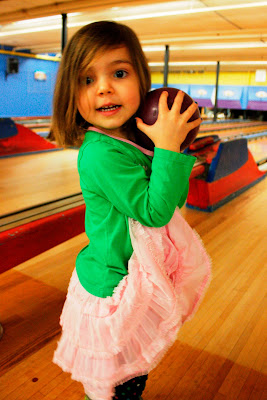 These next two photos show her doing her post-roll happy dance which she did shortly after the ball left her hands for the first 50 or so rolls. Someone made a comment about getting those fancy fast feet into a tap dancing class. Don't give me any ideas! I've already been wondering how early is too early to get her into a dance class...So many hobbies, so little time...and money. 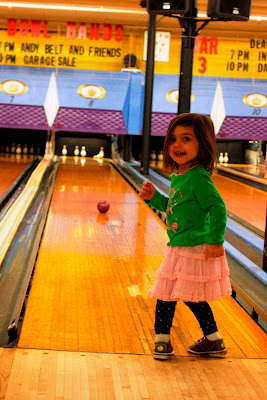 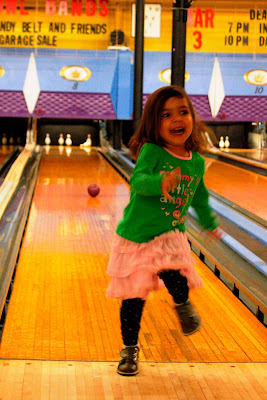 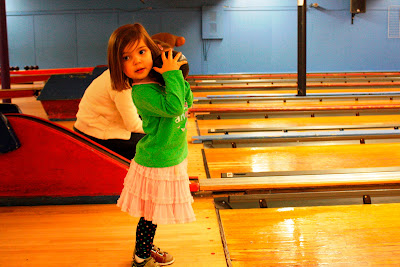 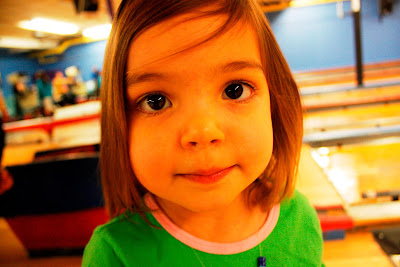 Jess and Todd showed up shortly after us, and then Erin and Ryan with Brody and Addison in tow, and after them, Shannon and Atticus with Demetrios coming along not much later. We had two lanes, with me naively thinking the kids would play on one lane and the adults would take turns on the other. Yeah, right! There were only four kids, but it was seriously insane for a good half hour. The kids took up both lanes and kept trying to expand out to our neighbor's lanes. It took all eight of us adults to keep them corralled. Atticus liked to pick up the balls and drop them where he was standing. Brody started off trying to roll the balls from where he picked them up rather than walking up to the line. All of them took to running off to other people's ball shoots anytime their own was empty. That first half hour was totally nuts, in a totally fun way, of course. All the same, I was relieved when a bit of the novelty wore off and a few went to explore the quarter machines.

I'm bummed because I didn't get many pics of the mad house, and those I did get are pretty blurry since no one was standing still. I was hoping this would not be such a Hannah-centric post, but I'm failing. Maybe some of the other parents have some pics I can steal.

In the meantime, here's what I've got: Addy (and daddy) sporting super cute glasses and a necklace that Hannah made for her. 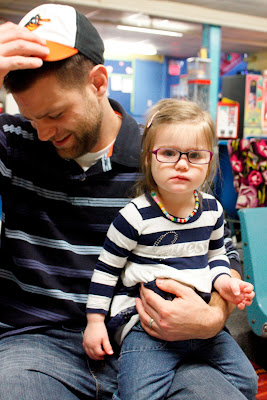 Here's one of the kiddos being relatively tame. 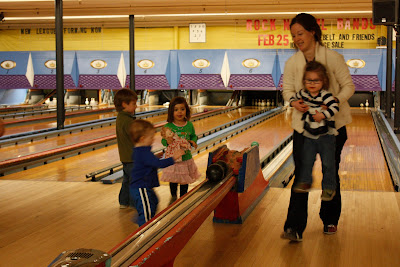 Then we decided we need a group shot of the kids so we stood them all in front of the lane and then snapped like mad in the hopes that someone would get a good one. This first one is my favorite because they're all being such individuals in it. If I ever get around to framing pics, I'm framing this one for her room. 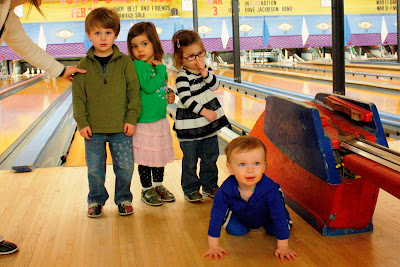 Being the youngest, Atticus had the hardest time with the concept of standing still and posing; he kept toddling off. The older kids have had enough practice by this point, and if you need evidence, check out Brody and Hannah in this one.  These two are true professionals and busted out a serious prom pic pose.   The cameras were shaking from all the laughter. 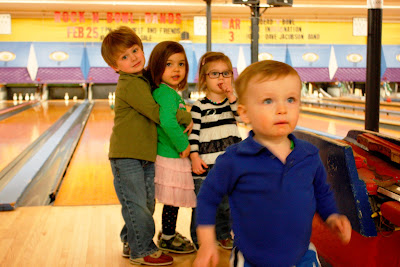 Hannah included Addison in the love fest in this next one.  Maybe next time Atticus will snuggle in there too. 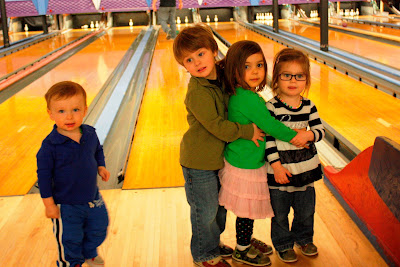 I seriously love bowling, especially duckpins since they're so much more manageable. I remember there being a place in Hagerstown where you could bowl duckpins upstairs and big balls down, and my dad used to take my brother and me there sometimes.  So fun, and an awesome activity for a freezing cold, super windy winter day like Saturday was.
Posted by terri at 8:51 PM