I just realized I never posted these two pics from Autumn's visit with us at the beginning of July....I've been terrible with blogging this summer probably because we've been spending most of our free time either looking at houses online or schlepping all over the greater Baltimore area to look at them in person. Exhausting. Frustrating.  Un-fun.  Yesterday we decided to give up for a while, mostly because Eric was beginning to realize that all of my reasons for wanting to wait to buy a house--like the fact that he could get transferred to another base in another year and a half--are actually pretty valid.  As much as I'd love to have some green space and a floor plan that wasn't so much like a shoe box (long and narrow), it seems silly to move when we don't know for sure that Eric will get stationed here again.  I was relieved after he called it off, but we didn't tell our Realtor so first thing this morning she sent us a bunch more listings, and Eric fell in love with a home in Reisterstown.  I'm talking majorly in love.  Totally smitten.  Personally, I don't get it. I mean, it's a nice house and all, and yeah, yeah, yeah, it's got a pool and hot tub, but there's nothing that really stands out, you know? It's just so....mediocre.  Don't get me wrong, I'm not sniffing at the awesomeness of a pool, it's just that I really love a historic home with character and this one is not that. There's no character.  That and the neighborhood is total suburbia right off a main road that's lined for miles and miles and miles with strip mall after strip mall and in between, fast food joints and car lots.  Boooooooring.  We drove through the neighborhood this afternoon, and I am just not impressed.  We've got an appointment to tour the house in the morning so we'll see if I change the tune I'm singing after that.

Speaking of moving, Autumn is leaving in less than a month to head to Dubai for a couple years, and I did not take nearly as many pictures as I should have while she was here.  In fact, I really only broke out the camera twice. First to snap some pics of Hannah all dressed up in this belly dancing costume complete with shoes and headdress that Autumn picked up for her while gallivanting around Europe. Fun, huh?? Between Autumn and Amy, Hannah's dress up box is getting quite eclectic. 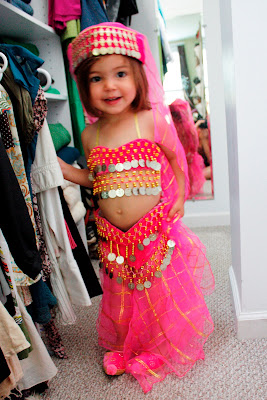 And the second time I broke out the camera was when we were heading out to dinner.  This was the July 4th weekend when Eric was working 12 hour days.  Autumn took Hannah and I to Goldenwest for dinner so I could spend nap time chatting rather than making dinner.  Wohooo! 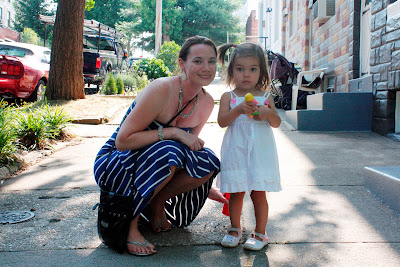 Sigh. I've got Amy traveling all summer, Laura living in the south, and Autumn heading to the Middle East for 2 years.  I miss my favorite ladies.
Posted by terri at 8:36 PM