A first I'm reluctant to admit

I have a secret.  I let Hannah have some ice cream a few weeks ago and I've been hiding it from you.  My friend Jenn captured the evidence on her phone, and I promptly stashed it on my hard drive while debating whether or not to admit to this indulgence.  In the end, I decided to post it for posterity because it will be fun to look back on someday and see a pic of her first ice cream cone at her second HonFest, but before you go getting all excited and thinking you can come gallivanting over here with trays full of cupcakes covered in frosting and sprinkles and all other such nonsense, please read the following:

1.) No, this does not mean that you can give her ice cream (or cookies or cake or any other sugar laden food with zerio nutritional content).

2.) No, this doesn't mean that I will be giving her (or myself) ice cream again anytime soon so don't think that I'm just keeping all the fun to myself because I'm not.

3.) This was a special occasion in that it was HonFest weekend and where there's a festival in Baltimore there's often a Taharka Brothers booth and I LOVE Taharka Brothers ice cream, especially their super amazing graham cracker flavor....yummmmmm. And we were leaving for vacation the next day so we were on vacation mode.  And also, let the record also show that I have been off the sugar for a looooong time now.  A seriously long time. (For health reasons, not by choice.) Such a long time that I was hell bent on getting graham cracker ice cream cone from Taharka even if it meant having to give Hannah a taste because eating it in front of her and not doing so would just be mean. 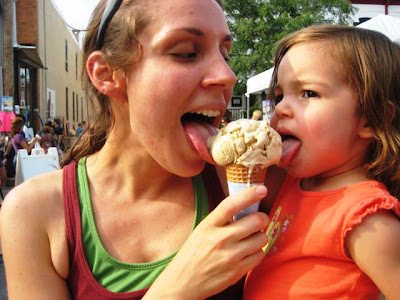