Whatever 24-hour bug I had attacked Eric on Saturday so we left him at home in bed and went to Port Discovery to check out the new Tot Trails exhibit with Adrienne and Kylie instead.  I normally avoid public places on the weekend since that's when the rest of the world is out and about which makes everything take forever and seriously tries my patience, and Port Discovery is no different, but fortunately it's big enough to accommodate the masses without feeling crowded.  We got to the parking garage a few minutes after 10:00 and watched car after family car full of kids pull in after us as we made our way to the elevator.  The ticket line was out the door, but we had our tickets on hold so we skipped right through to the members desk with a huge sigh of relief.

The reason I say all this is because the first thing we noticed (and liked) about the Tot Trails exhibit is how quiet it was.  It must be super insulated or something because the second the door closed behind us there was this quiet calm in spite of there being a number of people there.  Ahhhh! So nice.

Hannah beelined for this giant stuffed sea turtle and immediately carried it over to the fish tank (empty of fish for some reason) to try to put the turtle in the tank. 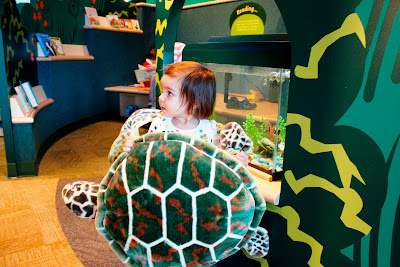 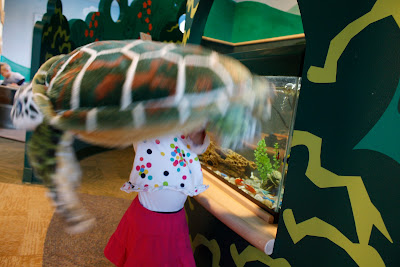 These sand dune things were pretty cool. There were lots of textured balls to roll up and down the hills and over the bumps. 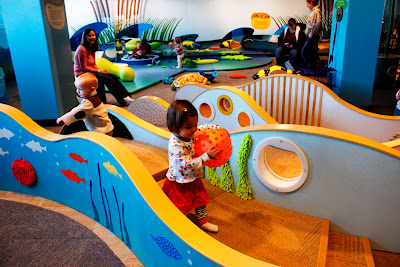 HoppinTots has this bilibo shell thingys so Hannah knew what to do with it.  I helped her sit down and spin around and relax in the ocean area for a bit. 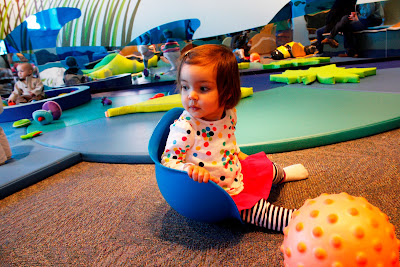 I think they did a really nice job decorating.  Isn't it pretty? 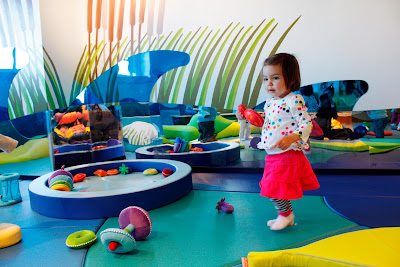 I always thought these object-filled tube thingys were kinda cool.  The library has them too and leaves them out before story time.  I'm always wondering where I can get some clear plastic tubes like that so I can make my own and have fun filling them with all kinds of cool stuff.  I like how Hannah picked up the one with all the multi-colored balls that kinda match her shirt. 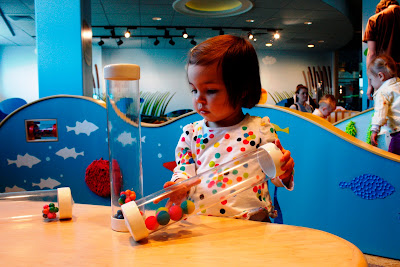 Kylie liked the one full of feathers. 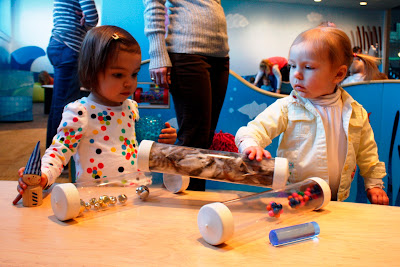 Kylie's favorite part of the exhibit was the sandbox. Once she found it, we couldn't pull her away from it. 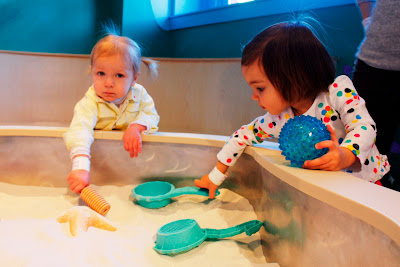 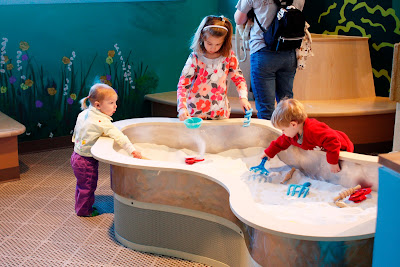 Okay, this next part was pretty cool and scored high with me on creativity.  Within the "forest" is a butterfly catching station.  You fill that tube thing in the pic below with a bunch of fabric butterflies (all shown in Hannah's net) and then when you hit the blue button, air blows the butterflies up into the air and all around.  There are four nets on the wall that the kids can use to catch the butterflies. 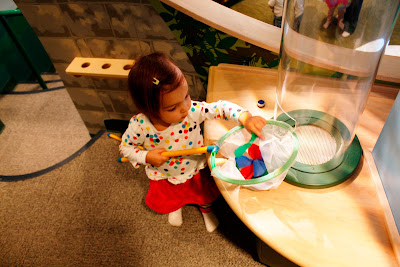 Tot Trails also had a reading nook, one of those screens that projects on the floor and senses movement (so you can "kick" the leaves and they actually move, like the one at Arundel Mills), puppets, and a great climbing/crawling area in the forest.

After about an hour in Tot Trails, Hannah headed for the door.  Kylie was bummed to leave the sandbox, but she forgot about it pretty quickly when she saw all the other cool exhibits.  Much to my delight, Hannah immediately started climbing up this netted tunnel with zero coaxing from me (the nets in the center are my favorite part).  When she first got on there were some bigger kids ahead of her on the net, and every time the net moved as a result of their moving, Hannah started laughing. It was awesome! I love her fearlessness and sense of adventure! 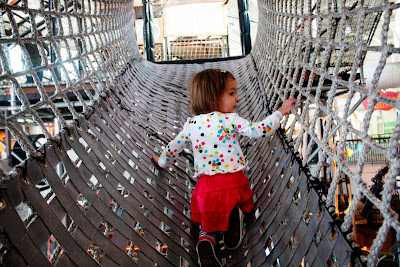 Once at the top, we walked around and found this tunnel, the same one we went down last time, and went down it again, laughing all the way. 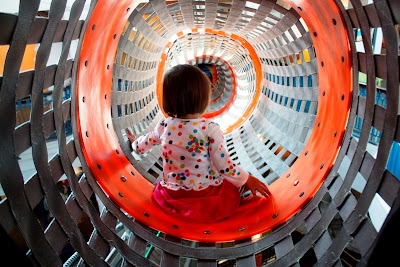 Kylie and Adrienne were right behind us the whole time! I snapped a variety of pics of them, but all are blurry except this one where the color is very orange-y... 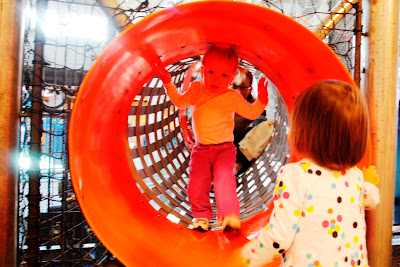 The diner was up next and was a big hit with the girls.  They collected food, cooked at the stove, stacked plates, washed their hands in the sink....They've really started to play together kind of cutely.  I mean, not always together, obviously, due to their age, but they're aware of each other now.  If Hannah didn't see Kylie for a few minutes, she'd stop what she was doing, look around, and yell "Ky! Kyyyyy...." 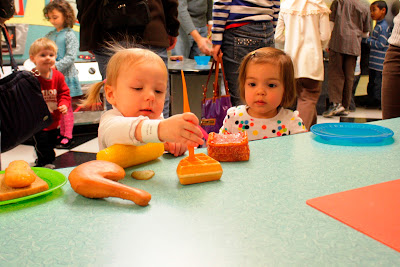 It's easy to lose track of time in that place because there is SO MUCH fun stuff to do! We ended up leaving later than we should have and missed Hannah's sleep window which made it hard for her to wind down, but she eventually passed out.  I'm bummed that we still haven't gotten to take Eric, but having Kylie there totally made up for it!  Anyway, we recently joined the Downtown Baltimore Family Alliance and one of the joining perks is a free 3-month membership to Port Discovery so I imagine we'll have plenty of other opportunities to take Eric.
Posted by terri at 9:34 PM