Unfortunately, we won't be dog sitting for Domino after all.  His health has been on a steady decline for the last year or so (he's 13 which is like 90 in people years) and got drastically worse in the last week. Laura has spent the last 13 years utterly in love with Domino and dreading the day when he wouldn't be around any longer, but in spite of selfishly wanting to hang on to him forever, she made what was probably the hardest decision of her life and allowed him to die last night, peacefully, rather than continue deteriorating and living in pain.

My dad has also been faced with that same difficult decision in the last few weeks after discovering that his beautiful golden retriever, Roc T. Rex, had a tumor on his spleen.  Since this is the same thing that killed him and Sondra's other dog, Bonnie, just 3 months ago, they were ready for the signs this time around and had Roc put down on Friday morning when his suffering seemed unbearable. It'll be sad going to my dad's now and not having Roc greet me outside when I pull up and Bonnie greet me when I come inside...Life without dogs once a dog has been there is so empty and sad.

To cheer up, Dad and Sondra came down on Sunday to soak up the rays of Hannah sunshine. Nothing like A Banana to brighten up a somber mood!


While Hannah was reading to my dad and Sondra, Laura was snuggling Domino, knowing that his time was running out and trying to enjoy as much of it as possible until then. 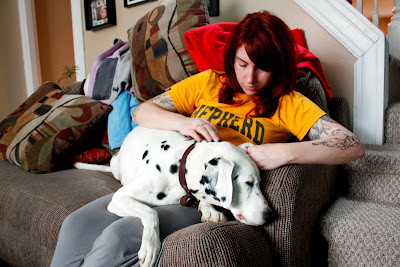 On her way up the stairs for a nap, Hannah was distracted by Domino's bed and considered taking a nap there. 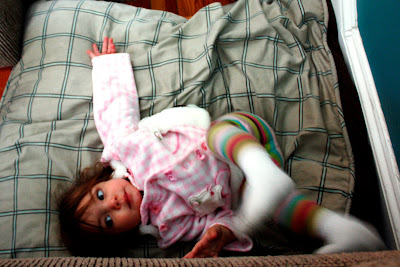 Amy was also visiting on Sunday and she brought some fancy pants products with her so we decided to get girly and have spa day.  First we used an exfoliating peel, then we put on this charcoal pore cleansing mask. It just occurred to me that we should have taken an AFTER picture because we were all pretty gorgeous after with these fresh, glowing faces....But during is funnier and funny is better than gorgeous, right? I tend to think so. 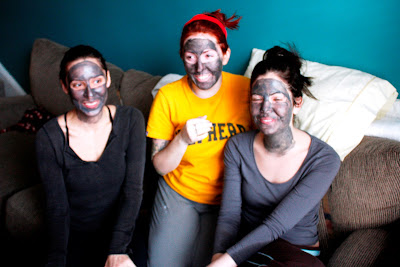