Jacob crawled into his 7-month birthday! It was just a few little knee nudges, but I'm counting it! Since he's 7 months today, I should probably finish his 6-month birthday post, right...this blog is still stuck in September, and Jacob is definitely getting the short end of the stick when it comes to documenting his milestones. I don't even have pictures of him eating for the first time! Of course, that's partly because it wasn't planned. It was summer, and he was a few days shy of 5 months, and he definitely didn't need to start eating regular food that soon, but we were all chowing down on some juicy cantaloupe that we'd picked up at the farmer's market that morning and he was reaching for it, so I let him suck on it, which he did with a frantic-ness that was absolutely hysterical. It was love at first taste!

We didn't start feeding him with any regularity until he was closer to 6 months. I'm not concerned with food allergies this time around, so I don't bother with that whole business of introducing a food and feeding it to them once a day every day for 4-7 days before introducing a new one. He eats butternut squash, sweet potato, avocado, prunes (the only baby food I'll buy, and a necessity because he is not a good pooper), peas, carrots, green beans, apples, pears, rice, and oats. I have freezer bags full of cubes of all those foods in the freezer so I can easily mix and match his meals. When his days without pooping start nearing a week, I cut the solid foods, and the increased nursing usually moves the clog along. This kid has a weaker digestive system than Hannah, and although his gas pains have been far fewer since I eased up on the raw leafy greens, he is still throwing up pretty frequently.

It won't be long before we're giving him little chunks of food to break down with the teeth that are now filling up his mouth. His first teeth (front bottom two) broke gum the day before he turned 6 months. In the last week and a half, four more have broken through across the top. There were a lot of sleepless nights as a result of that, but since he has yet to stop constantly waking up at night, it wasn't anything I'm not already used to. 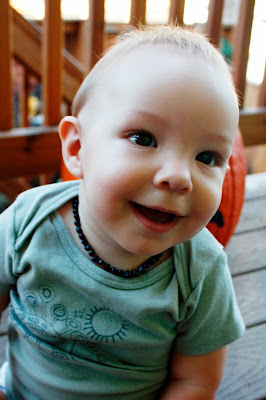 Because of Hannah's refusal to sleep, I have been hyper aware of Jacob's sleep and have tried to instill good patterns from the very beginning, including laying him down drowsy but awake, watching for his sleepy cues, making sure not to over exhaust him, sticking to a schedule, etc. Somehow, we still got off track...

When it comes to napping, he's usually a breeze. I can lay him down awake and he'll pop his fingers in his mouth and pass out. Hannah hated being left alone in her room, hated sleeping, hated missing out on whatever was going on....She still does. Bedtime with Hannah is still a lengthy process; she'd stay up all night if we let her and still be going long into the next day. She's so active that she's always masked her sleepy signs, so if it weren't for the Sleep Lady, I'd have never known how much sleep she needed. With her, I had to watch the clock and lay her down when I knew she should be tired. Sometimes she passed out, sometimes she stripped herself of clothes and diaper and threw them out of the crib along with everything else in the crib and the crib sheet.

Jacob's eyes get all red when he's tired and he gets crazy cranky. He's an easy read.

So he's easy to get to sleep, but once asleep, he doesn't stay that way long. Hannah might have screamed for 2 hours each night, but once she finally passed out, she was usually out for the count, and she was sleeping through the night by about 6 or 7 months. As soon as I read that babies should be able to go 12 hours without eating, I stopped feeding her at night, and I don't remember it being a painful experience. Jacob still wants to eat every 2 hours. I realize now that I should have started curbing the night time nursing a while ago. I kept thinking he'd stop himself, but since he refuses to nurse anywhere other than laying down in bed with me, and since we aren't home all day to accommodate that kind of picky eating, he's adjusted by starving himself during the day and then eating all night.

Then last week he pulled a page from his sister's playbook and stayed up until after 10 for three nights in a row. The first night, I brought him back downstairs and plopped him on the floor while I got on my computer to work so he wouldn't wake up Hannah. The second night I alternated between laying in my bed with him and rocking him. The third night I told Eric he was up to bat; he brought him downstairs and watched TV with Jacob beside him on the couch. By the fourth night, I'd had enough and knew that the developing pattern needed to be broken immediately.

Sleep training is a bit trickier when your kids share a room. I carried Hannah into our bed to sleep, dragged one of her chairs up to the crib, laid Jacob down, and braced myself for day 1 of the Sleep Lady's shuffle. He cried and fussed, but only for about 12 minutes, which is not bad considering his sister could go for hours. He then slept until 2ish (AWESOME). I nursed him and laid him back down, and he cried. I sat by his bed from 2:30 a.m. until 4 a.m. that night when he finally passed back out. That was excruciating, but the nights since then have been easier. He is consistently waking up between 12-2 to nurse and then not again until around 6 and then he goes back to sleep until 7:30. Next step is to remove one of those night time feedings.... 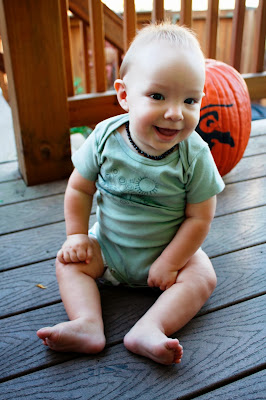 In spite of keeping me up all night, Jacob gives babies a good name. Hannah, not so much. I have a lot of fond memories of snuggling baby Hannah, but I also remember a lot of screaming. Baby Hannah made me earn my mama badge. She kept me on my toes, always reading and researching, desperately trying to figure out what she needed and how I could provide it. When Jacob was in utero, I frequently (and only half jokingly) retorted that babies are for the birds and that I'd love to skip it all and move straight to the toddler phase.

Well, I'm singing a different song now. I get it, I get why people love babies. This baby is why.

This is not a knock against Hannah. She is so spirited and kind and compassionate and has such a big, fun personality. Everything that can be challenging about her is also something that I admire. It's amazing to me how different they are though and how different this parenting experience is.

When Hannah was a baby my mom once said, "She's so serious; not at all like you when you were a baby. You were always smiling." I had no idea what she was talking about, and at the time I was a bit offended. My interpretation was "your child is not happy. You fail." Us mamas can be so sensitive!! Now that I have Jacob, I understand what she meant. Hannah was definitely a more serious baby. She was happy, but serious happy. Jacob is always smiling. Always. He hands out smiles like candy on Halloween.

He is so happy that he almost makes us want another baby someday. ALMOST. But no. I've read that each baby you have is usually bigger than the one that came before, and I assure you that I will not risk having a baby any bigger than this little giant. Also, although a big family sounds really fun, especially when the kids are grown, I would rather focus all of our resources and love on the two that we have. I'm finding it hard enough to give them both the quality time they deserve now that there are two; I don't want to have to spread my time even more thinly.

Also, the bad sleeper DNA is too prevalent in our gene pool, and I'm too tired to have another non-sleeper. 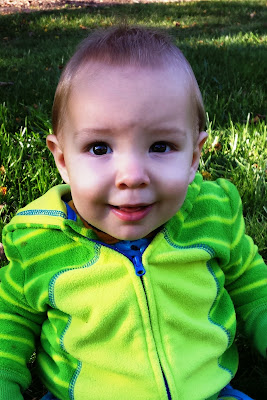 Time now for a family montage of baby pictures.  Here we all are at 6-7 months of age, starting with Hannah.

I'm not sure of Eric's age in this picture, but he looks about 6 months. Hopefully Grannah will correct me if I'm wrong!
We definitely look related, especially Hannah and Jacob, but there are no spitting images in this family: the kids took their gene pool and made it their own! 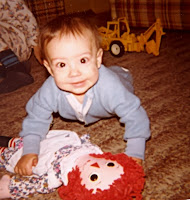 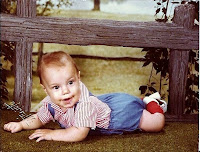